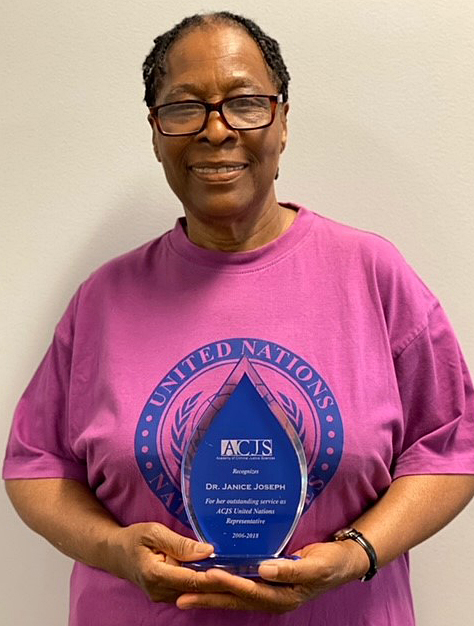 Galloway, N.J. - Janice Joseph, distinguished professor of Criminal Justice and coordinator of the Victimology and Victim Services minor at Stockton University, was recently recognized for her outstanding service as the Academy of Criminal Justice Sciences (ACJS), Non-Governmental Organization (NGO) Representative to the United Nations (UN) for over 10 years.

Serving as an advocate and activist for victims of gender-based violence, Joseph made history as the first official UN NGO representative for the ACJS. Holding this position has been a remarkable experience in which she has accomplished significant work and research.

Notably, she participated in the working group that drafted the UN Standard Minimum Rules for the Treatment of Prisoners. Known as the Nelson Mandela Rules, they were adopted in December 2015 by the UN General Assembly. In 2016, she made a presentation to New Jersey Department of Corrections members to promote the new UN standards. She also served as a member of the team of experts, in Vienna, Austria, who drafted the UN Resolution on femicide – United Nations General Assembly Resolution 68/191 (taking action against gender-related killing of women and girls) and also participated in an intergovernmental expert group meeting to in Bangkok, Thailand to discuss that Resolution in 2014.

The role of ACJS UN NGO Representative has been one of the major highlights of my professional career. It has been a privilege to meet and work with UN personnel, high ranking government officials, academics, NGO representatives, practitioners, Ambassadors, activists, advocates, survivors of crime and royalty from around the world

When reflecting on her involvement, Joseph said, “This position provided me with the opportunity to understand the high-level work of the United Nations Office and Drugs and Crime (UNODC), located in Vienna, Austria. It also provided me with a comprehensive insight into international diplomacy; the roles of international intergovernmental organizations; member states and civil society in the UN; and the evolving and challenging role of the UN.”

Students have also benefitted from her experiences. Introducing criminal justice students to the UNODC SHERLOC Project, Joseph supervised two independent study projects. Using the SHERLOC database at the UN headquarters, students collected information from three criminal justice databases, which was submitted to the UN to be disseminated to its member states. They presented their research during the Day of Scholarship, 2017.

Additionally, Joseph taught the course GSS 2368: The Global Community to honors students, with a large portion of the course focused on the UN. She also took students in this class to the United Nations for an educational tour in 2012. Moreover, in commemoration of United Nations Day, she has made several presentations to students highlighting the history and importance of the United Nations in the international community. Due to her monumental involvement with the global organization, she provided these students with a comprehensive learning experience.

“The role of ACJS UN NGO Representative has been one of the major highlights of my professional career. It has been a privilege to meet and work with UN personnel, high ranking government officials, academics, NGO representatives, practitioners, Ambassadors, activists, advocates, survivors of crime and royalty from around the world,” Joseph said. “The experiences gained through this role have been very significant. I am extremely honored to receive this award.”