North Wildwood, N.J. – When someone says Wildwood and volleyball tournament, you might think of athletic young people battling it out on the beach.

On a recent Tuesday in December, an enthusiastic group of players good-naturedly trash-talked their way around the North Wildwood Senior Center as they walked (a few with canes) to the court for the much-anticipated North Wildwood vs. Lower Cape Senior Center Chair Volleyball Tournament. 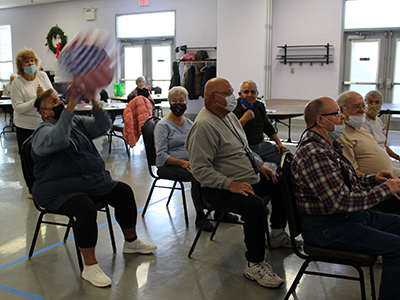 “This is wonderful, it’s so much fun,” said Kathy Schroeder of Wildwood. She broke her leg earlier this year, started with a walker and still uses a cane, but was ready to play.

“At first, we said ‘how are we going to play volleyball in chairs?’   Schroeder said. “But we really do move around.”

Chair volleyball was introduced in the two senior centers in Cape May County this year by the Stockton University Center on Successful Aging (SCOSA). SCOSA worked with Cape May County Office on Aging Director Mary Dozier, using county funds from the federal Older Americans Act to offer programs at four senior sites in the county.

“We provided each site a list of proposed activities, and one they chose was chair volleyball,” said Michaelle Cooke, coordinator of the program for SCOSA. She said the center participants really embraced the game, enjoying both the interaction and the good-natured competition.

“It was their idea to have a tournament between the two sites,” Cooke said.

By tournament time, 14 participants from Lower Township had arrived and split into two teams. The North Wildwood team wore new blue terrycloth headbands for the event. 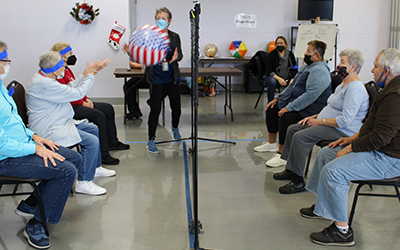 The court, created from a small section of the larger meeting room, had seven chairs on each side of a portable net. Cooke finished blowing up the lightweight beachballs they would use, and North Wildwood Center senior citizen program aides Joe Harris and Carolyn Eckert set up as linesman and scorekeeper.

“I told them they had to be on their best behavior today,” said Barbara Gevaudan, a senior citizen program aide from the Lower Cape Center. “They’ve really loved this. They’ll ask when we’re playing again.”

Walt Kryszczak, a Philadelphian who moved to Wildwood, said he enjoys the interaction.

“Everyone gets involved,” he said. “The time just flies by and you’re not home by yourself watching the boob tube.”

“And it’s good exercise,” added Joe Brown who used to play on the beach while serving in the military in Vietnam.

As the games began, the players were reminded they cannot stand up while playing.  If a player’s  mobility was limited and they struggled to serve, adjustments were made for them to toss the ball instead.

“They are just so encouraging to each other,” Cooke said. “They’ll find a way for everyone to play.”

Schroeder watched the first couple of games, before subbing in to play.

“This is great because new people are getting involved,” she said. “We may be in chairs, but we still move around. When I started, I was in a walker.  I also do yoga and cardio. I got more out of exercise here than in physical therapy.”

At lunchtime the score was tied 3-3, and the teams took a break to eat. Technically, North Wildwood won the after-lunch tie-breaker, though since some players had to leave, Lower Township players filled in on the North Wildwood team. After all, bragging rights notwithstanding, the tournament was really more about getting together to have fun than it was about winning.

A gallery of photos of the tournament is on flickr.