More than 100 people, including police, government officials, community leaders, and academics attended both in person and via Zoom. 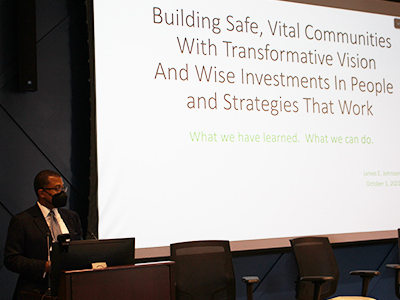 Stockton Provost Leamor Kahanov welcomed the attendees and said Stockton was privileged to be able to host important conversations on the issues of policing and social justice.

“Everyone shares the responsibility to respond,” she said.

The theme of shared responsibility resonated through the daylong conference.  Keynote speaker Jim Johnson, who was Gov. Phil Murphy’s appointee to oversee the Atlantic City takeover, set the tone by referencing Martin Luther King, Jr.’s comment that all life is inter-related.

“We need to build trust, build bridges and invite people in,” said Johnson, who is now chief operating officer with Wall Street Trinity Baptist Church in New York City.  “Everyone one of us contributes.”

He said the focus should be on partnerships, not punishment.

“You cannot punish someone into excellence,” said Johnson, whose report served as the guide to transitioning Atlantic City back to local control.  Atlantic City Councilman Kaleem Shabazz also spoke about initiatives in the city.

The conference was sponsored by the Stockton Presidential Task Force on Stockton University Campus Safety. Sahin said the task force also wanted to reach out and share what they learned with the community.

The task force members were: