Galloway, N.J. - If you ask Aaron Stoler, assistant professor of Environmental Science, where the best maple syrup comes from, he'll probably tell you to look in your backyard.

Canada and Vermont are leaders in maple syrup production, but the Maple Grant team at Stockton University is focused on local production that gets families into the forest to harvest their own sap for homemade syrup.

With the support of a three-year, $410,000 U.S. Department of Agriculture grant, Stockton's team tapped 90 red maple trees on campus and provided materials and training to nearly 40 community partners who are doing the same on their properties.

This season, the Stockton team harvested nearly 1,000 gallons of sap from Stockton's sugar bush and yielded 11 gallons of syrup that they processed inside a shipping container turned sugar shack that houses a wood-fired evaporator for large-scale boiling.

A group of faculty members and students are researching the science and economics of syrup production in the pines and hosting in-person and virtual programs about science, maple-inspired cooking, art, poetry and more. Many events are kid friendly such as the upcoming fairy and gnome hunt and a night hike to look for frogs. Follow @StocktonMaple on Instagram and the Stockton Maple Grant on Facebook.

This year was the first of three years that data will be collected to determine the best landscapes for maple syrup production in South Jersey. It's not too soon to start thinking about getting involved for next winter. If you have a maple tree and want to tap it, email maplegrant@stockton.edu for more information.

Photo story by Susan Allen with images from the past 14 months.

For 30 seconds of the season's highlights, watch this Instragram reel. 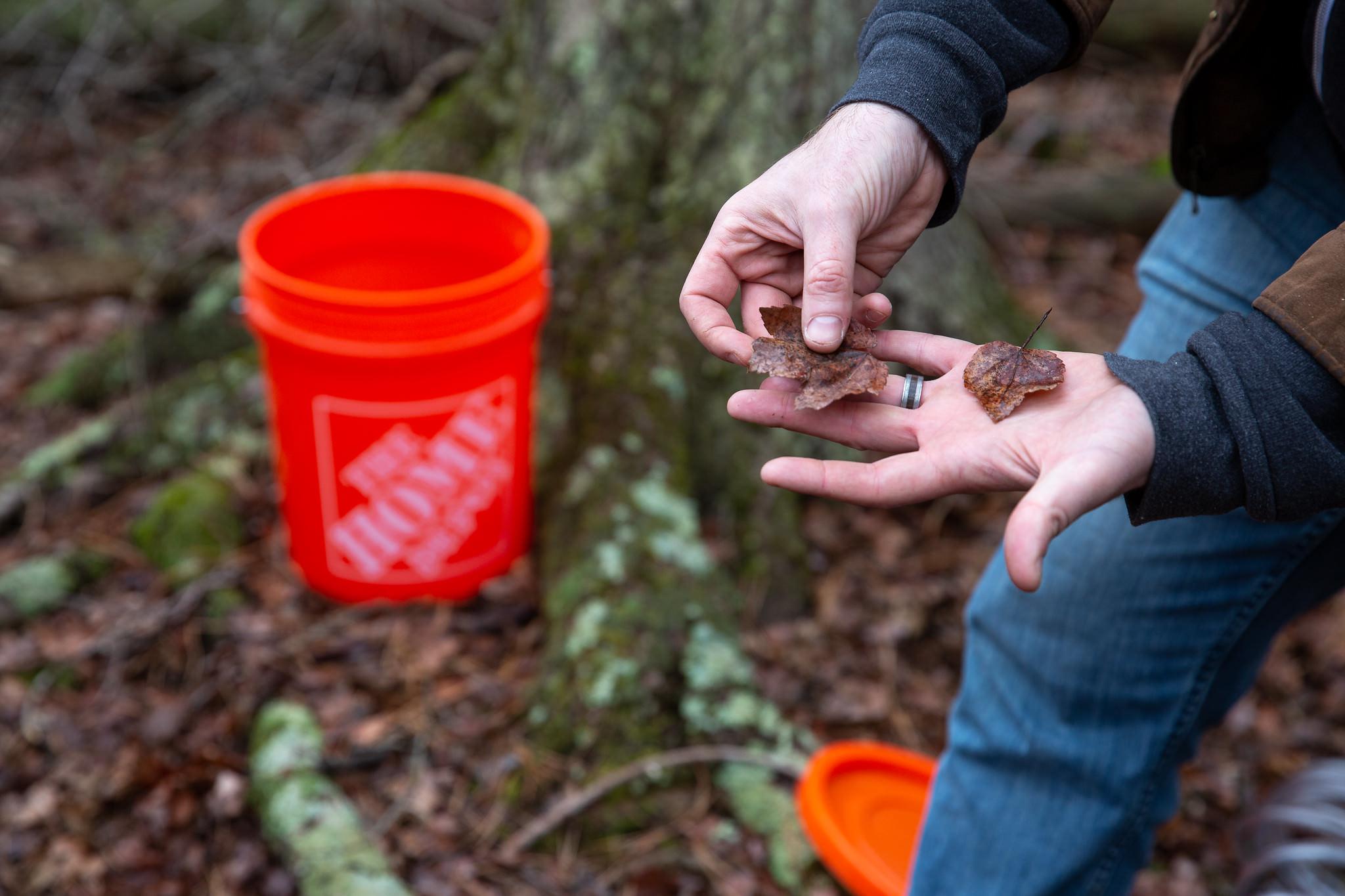 Maple sugaring in South Jersey starts with maples trees; mostly red maple because that is the dominant species, but any maple will work. Looking on the ground for leaves helps with tree identification, especially in the winter when deciduous trees are bare. Matthew Olson, assistant professor of Environmental Science, developed a guide for red maple identification. Generally, red maple leaves have 3 lobes with finely toothed edges and are red and occasionally yellow in the fall. The sugar content of sap varies by tree species, but sap from any maple tree can be boiled down to make syrup. 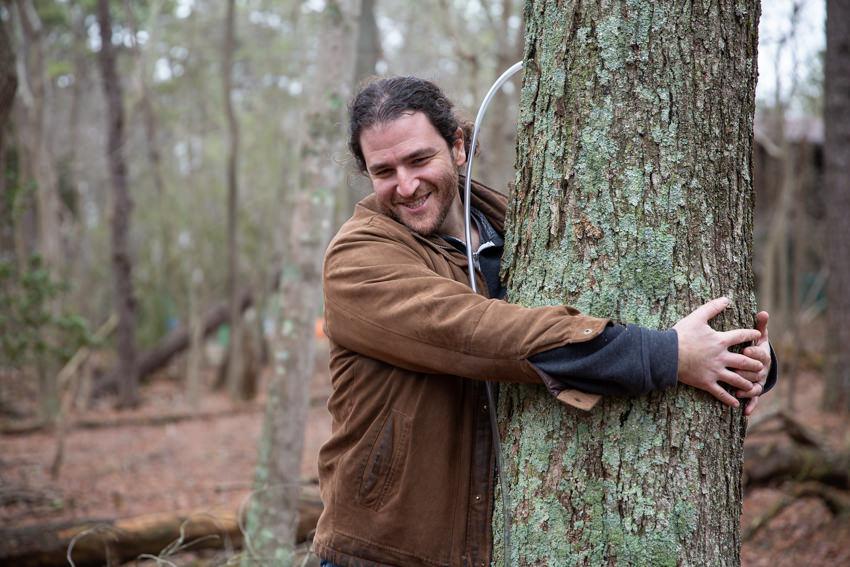 The tree hug test allows homeowners to determine if their red maple trees are large enough to tap. Aaron Stoler, assistant professor of Environmental Science, demonstrates the simple test. To participate in Stockton's maple grant project as a community and research partner, homeowners must have at least an acre of forested land with at least 10 red maples present. If you don't have that many trees, the team is still happy to give you a couple of taps. "Even sap collected from a single tree is enough for one or two pancake breakfasts," said Stoler. 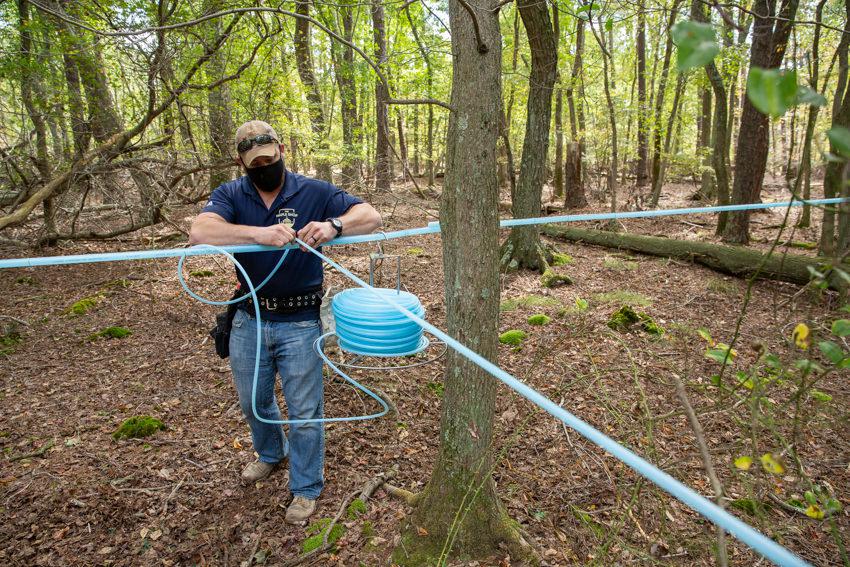 In the fall, a blue spider web of tubes was woven into a network to collect sap with help from Jon Rybkiewicz, of The Maple Shop (Chester, N.J.). Thin lateral lines come from each tree and feed into two thicker main lines that guide the sap into a central collection tank. To help the sap get into the collection tank, a vacuum pump slowly pulls the sap from the trees into a releaser, and as soon as the releaser fills up, the sap empties into the collection tank. The blue lines can be spotted from Parking Lot 1 when looking across Vera King Farris Drive toward the forest. 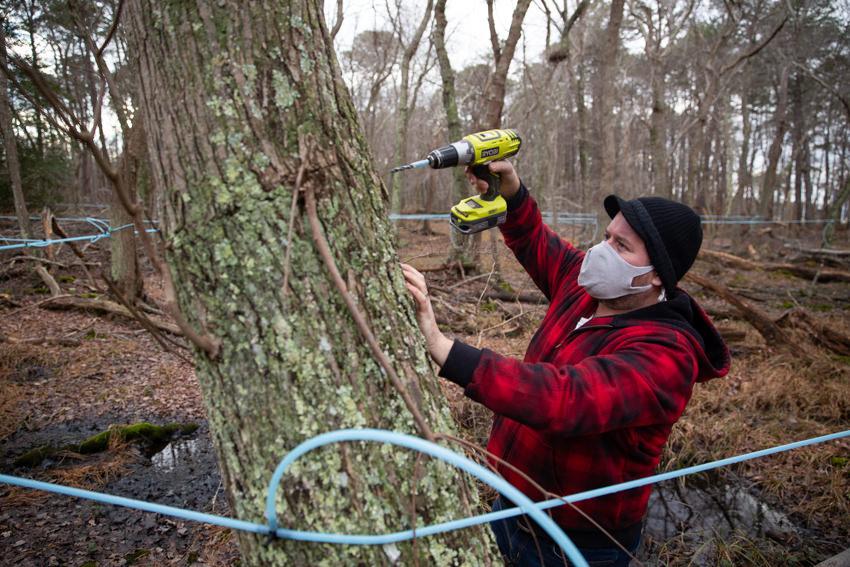 Joseph Russell '06, the maple team's research assistant and an adjunct professor, drills a hole into a red maple in preparation for adding a tap. Relocation of taps allows the same trees to be tapped annually. 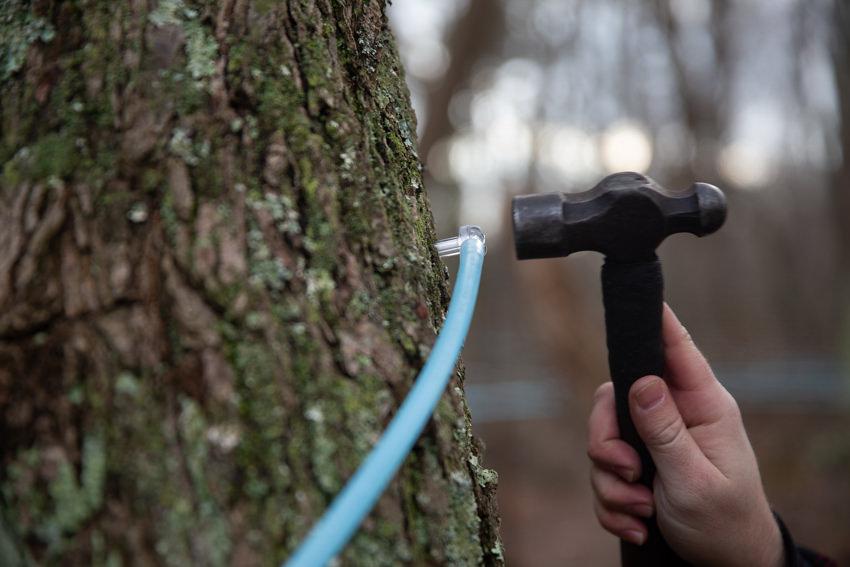 After drilling, a tap is hammered into the tree. A small check valve inside the tap prevents sap that was already drawn into the tubing from being sucked back into the tree. Stockton's maple forest is known as a sugarbush. 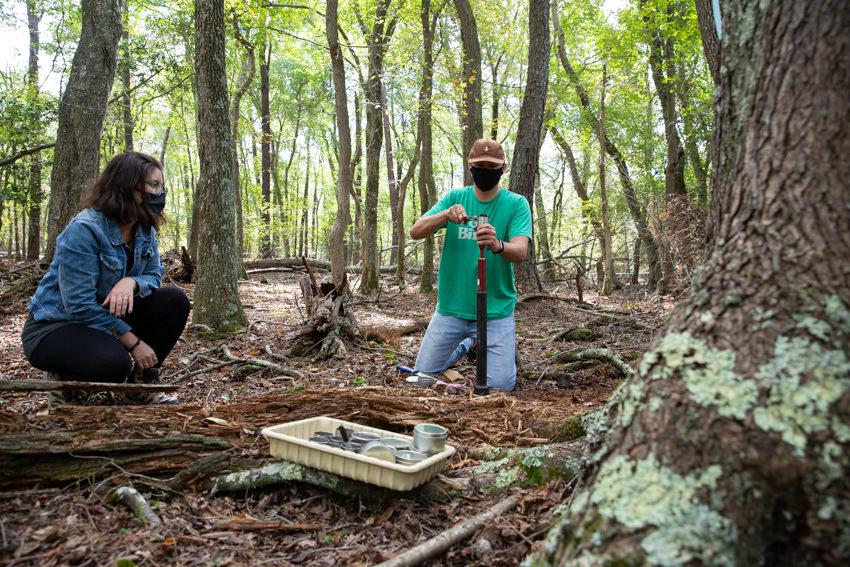 Jessica Hallagan '12, assistant professor of Environmental Science, and Ryan Hegarty, an Environmental Science major, collect a bulk density soil sample that describes soil solids, both minerals and organic matter, and pore space where water and air are stored. "Density gives us an idea of the composition of the soil too. Minerals are typically denser than peat and organic matter because it adds more fluff and pore space to the soil than mineral matter," explained Hallagan. Our region has low density wetland soils with high amounts of peat. "This may impact how water and nutrients are retained in the soil and allocated to the maple trees, and ultimately, may impact maple growth and physiology and sap production," said Hallagan. Tree litter and loose soil samples were also collected to examine other properties, such as texture, nutrient content, carbon content, moisture content and pH. Ten trees were randomly selected in the stands on campus and at partner sites for sampling. 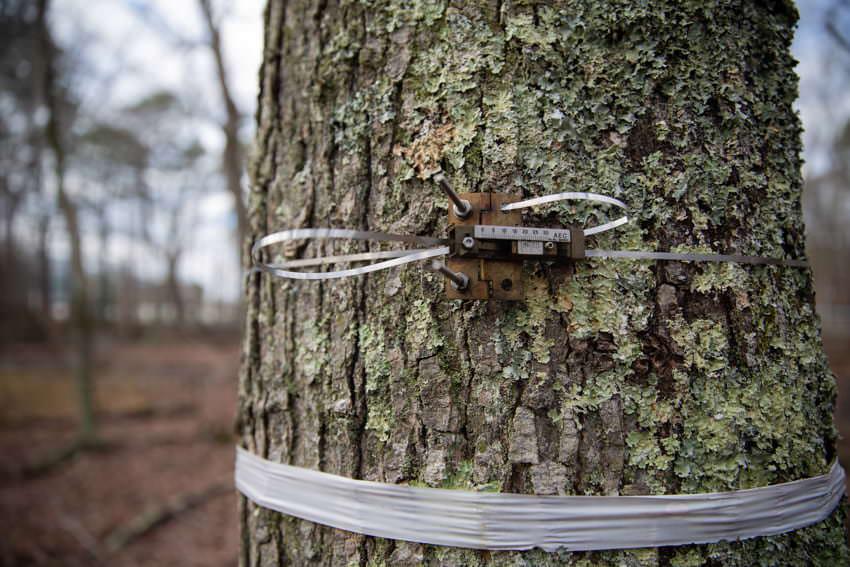 A red maple wears a band dendrometer that measures changes in the trunk's circumference. Matt Olson, assistant professor of Environmental Science, outfitted ten red maples with band dendrometers and will be adding new laser versions that will detect minute changes in trunk radius every half hour or less and store that data. "This will allow us to measure both growth and diurnal changes in trunk radius resulting from the trees pumping water up from the soil (transpiration). Interestingly, a tree's radius actually shrinks, albeit minor shrinkage, during the day due to the suction from transpiration, which happens as water evaporates inside of the leaves and the leaves release the water vapor through specialized pores on their outer surface (called stomata)," explained Olson. His research will focus on how sap collection affects tree health and functioning. 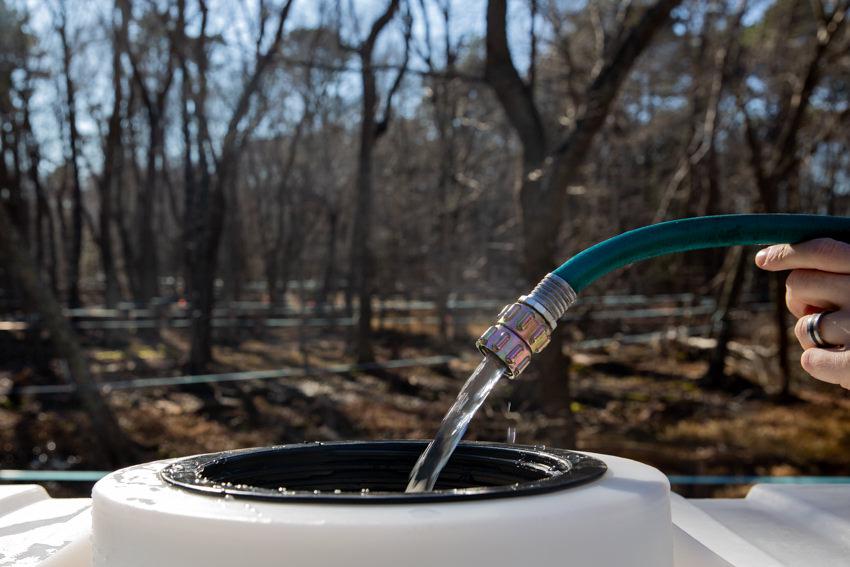 Sap flows from a hose into a collection tank sitting in the bed of a pick-up truck that will transport the sap to the evaporator, located next to Stockton's Sustainable Farm. During the winter, the maple team hopes for nights with freezing temps followed by sunny days that thaw the frozen water content inside the trees. The melting water puts pressures on the sap, forcing it to exit the tree through the tap. The sap, which looks and flows like water, is about 98% water. Before Europeans colonized North America, Native Americans collected sap to drink, and they were among the first to make this sap into syrup, explained Stoler. "We are just following in their tradition albeit with a bit more advanced technology," he said. He added, "It is incredibly important that we also follow in their tradition of respecting nature and giving back to the land through conservation and education." When he's working in the maple forest, Stoler fills his thermos with sap, which he describes as slightly sweet water. It takes hours of boiling to evaporate the water content of the sap, leaving the natural sugar that we consume as syrup. 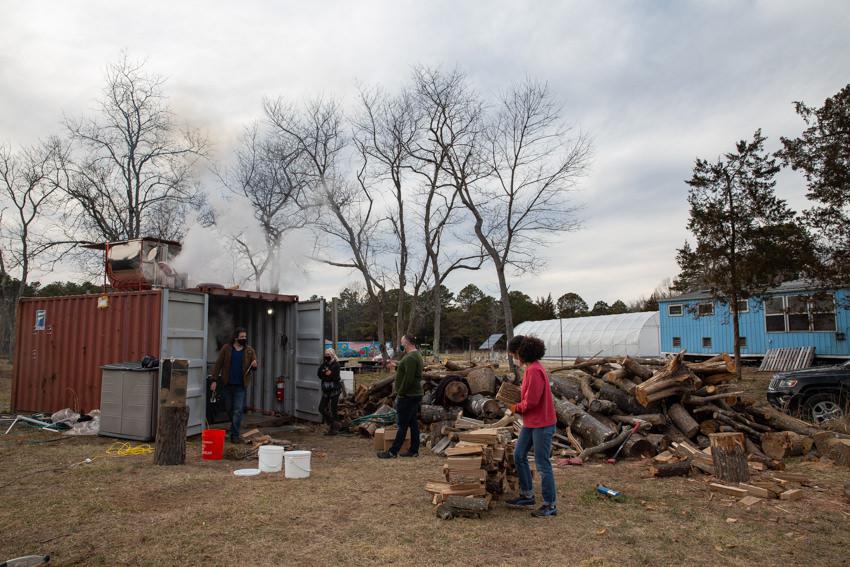 Once the sap arrives at the sugar shack, it is boiled down in a wood-fired evaporator. When the wind direction is right, the delicious syrup scent is strong enough to overpower the less fragrant fertilizer scent from the nearby organic farm. 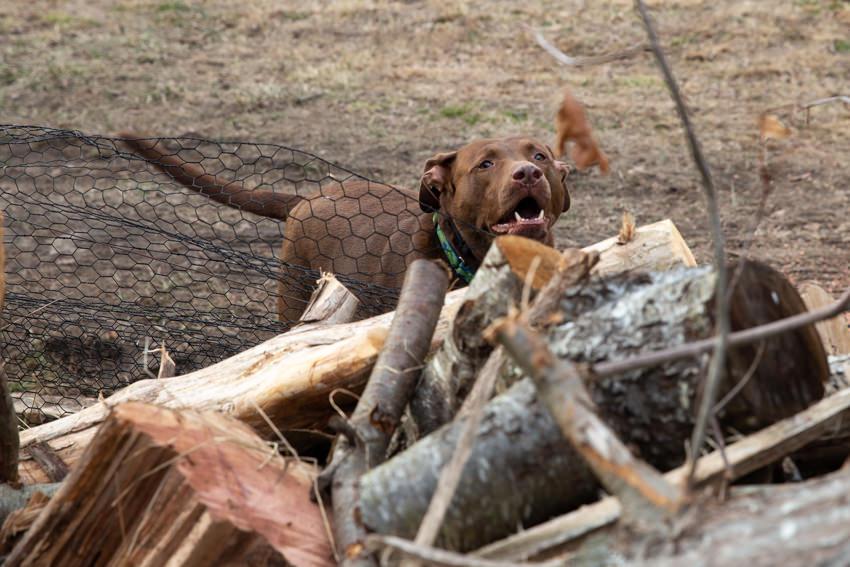 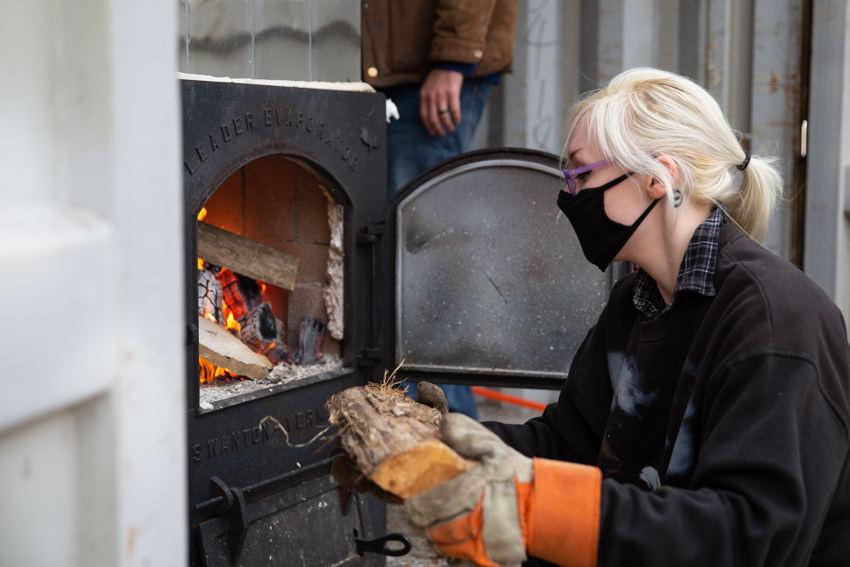 Between the fire and the wood splitting chores the team doesn't have trouble staying warm. Amanda Michleski, an Environmental Science major, tends to the fire that boils the sap. Her work inside the lab looks at how tapping red maples may or may not affect insect populations. To answer that question, she carefully sifts through maple leaf litter samples to count bugs. So far, she has seen mites, wasp and beetle larvae, and worms. 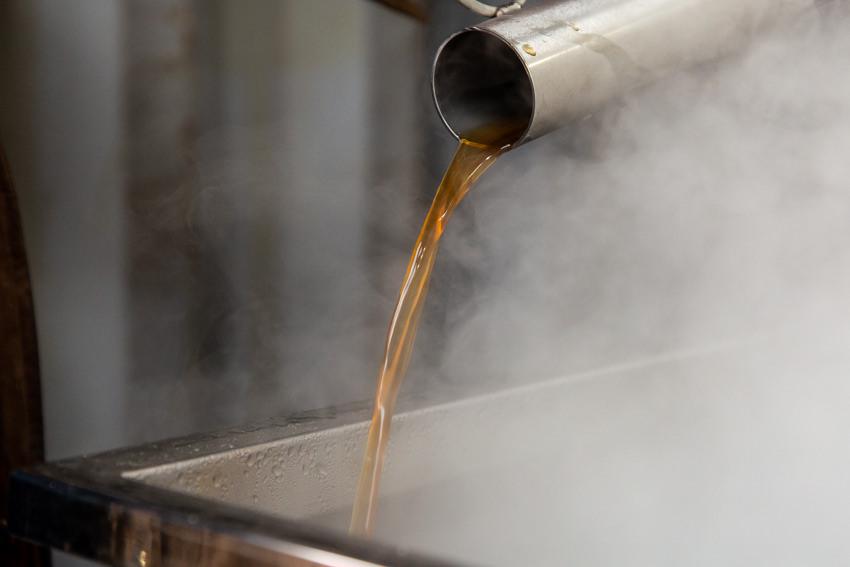 The long-awaited syrup tastes as good as it smells. 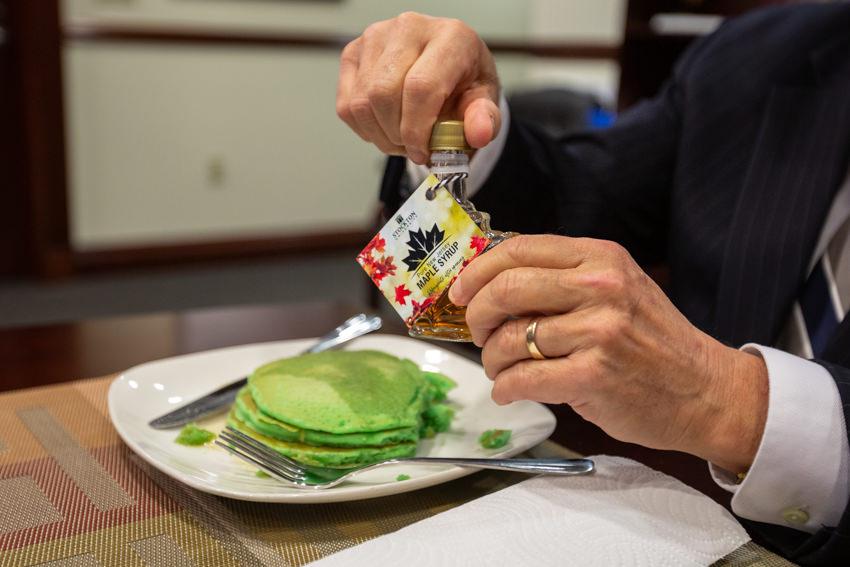 In early spring, sugaring season comes to an end. On St. Patrick's Day, Aaron Stoler delivered a bottle of fresh syrup from Stockton's first batch to President Harvey Kesselman who drizzled it over green pancakes from N-Wing.