Loryn Stanton stands in front of the osprey wings mural she painted this summer to help welcome new students during New Student Orientation. Student Transition Programs was looking for a fun photo op, and Stanton brought the idea to life. Below, TALONS--Transition Activity Leaders of New Students--pose with the osprey wings.

Galloway, N.J. - When Loryn Stanton, a junior Visual Arts major, thinks of an osprey, she envisions a raptor plunging talons first, wings tucked into a fish’s domain. From a full speed dive to a complete halt in the water, it then pumps its wings with all its might to lift back up into the sky with the added weight of its catch.

“Somehow they’re strong enough to do that,” Stanton said.

As she flicked blue and gold paint onto the glass windows outside D-Wing, the splatters emulated the droplets of water dispersing from an osprey’s feather during a mid-flight shake.

“Their feathers have a quality to shed water,” she explained.

Stanton painted an osprey mural that welcomes anyone to stand in front of the open wings for a photo op. 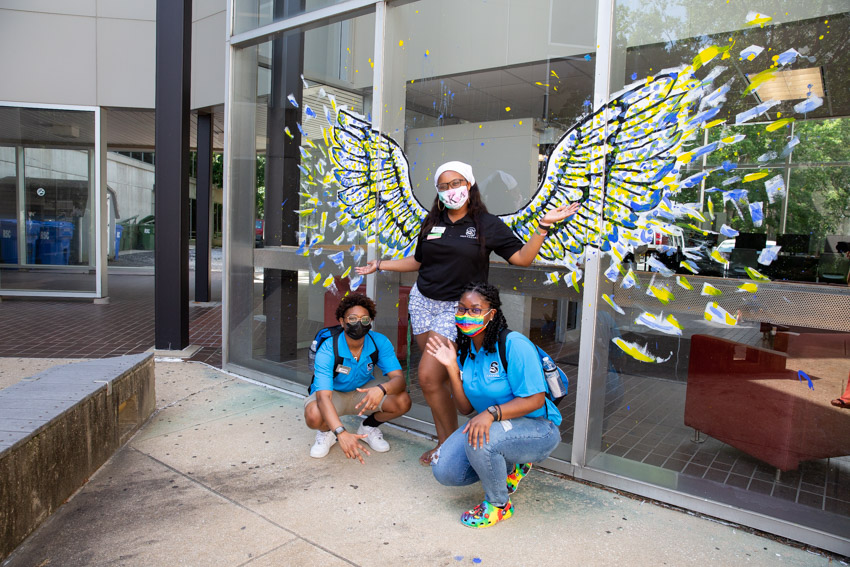 She describes her style as realism with a cartoon twist.

Student Transition Programs wanted to collaborate with the School of Arts and Humanities on a mural “to ignite Osprey spirit among students during New Student Orientation,” explained its director, Ana Edmondson.

Stanton said it was a "pleasant surprise" when her professors, Hannah Ueno and Michael McGarvey, approached her with the idea.

The proposal reminded her of the time she saw people lined up waiting for their turn to pose in front of wings painted on a wall in a Los Angeles shopping district.

She was excited to add her own touch and the school colors to that concept.

“Student Transition Programs is really excited to see our dream come to life! Our hope is that one day, it can evolve into a permanent mural installation on campus that offers another opportunity for Stockton students to show their Osprey pride. Perhaps it'll become a tradition that students can snap a photo at their orientation and then again at their graduation,” said Candace Mitchell, coordinator of Student Transition Programs.

The details of the osprey wings came naturally to Stanton who has always been interested in zoology.

She paints pet portraits and has developed an eye for identifying each animal’s personality and unique characteristics.

Motion was her inspiration while developing the wings mural. “I knew I wanted something with movement so it would feel like you are spreading your wings,” she said.

The splatters have a meaning too. “You can get soaking wet in personal issues and the issues of the world, but you have resources to fly out and shake off,” she said.

Stanton, who is studying Illustration, is currently an intern at the Stockton Art Gallery and writing a fantasy novel for young adults. For almost a decade she had been thinking about a novel, and during quarantine, she began outlining the plot. Her goal is to pursue character and concept design.

Snap a photo at the new mural and tag #StocktonU.