President Joe Biden with the extended Hughes family. Hughes and Biden were colleagues in Congress and Biden spoke at a Hughes Center Honors event recognizing Hughes in 2017.

Galloway, N.J. _ A film celebrating the life and legacy of the late Ambassador William J. Hughes debuted at a special Zoom showing on March 10, hosted by the William J. Hughes Center for Public Policy at Stockton University, which produced the film.

In introducing the film, Stockton President Harvey Kesselman called Hughes “one of the most accomplished leaders ever in South Jersey,” noting his work as a Congressman, Ambassador to Panama, and educator at Stockton.

“He was a model of bipartisanship and believed firmly in civic engagement,” Kesselman said. 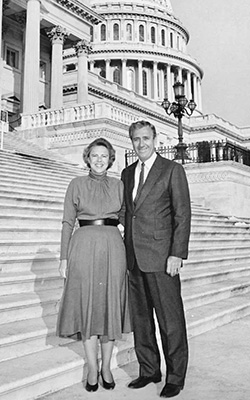 A native of Penns Grove, Salem County, Hughes entered politics because of his concern about ocean dumping of trash that was closing Jersey shore beaches in the summer. He spearheaded legislation that prohibited ocean dumping and protected beaches. The Ocean City resident also led the legislative efforts that created the Pinelands National Reserve and National Wild and Scenic River designation for the Manumuskin and Menantico rivers.

Ed Salmon, a longtime friend of Hughes and chair of the Hughes Center advisory board said that while it took years to get Hughes to agree to do the film, he is thrilled that future generations will be able to learn the story of Bill and Nancy Hughes.

Hughes’ son, Bill Jr., speaking on behalf of the family, said his parents left their mark on South Jersey, the nation and beyond, and they did it together. He thanked supporters for helping to continue their legacy through their support of the Hughes Center.

“They believed in family, faith, public service and giving back,” Hughes said of his parents. “The mission of the center continues through your support.”

John Froonjian, executive director of the Hughes Center, said that the center serves both students and the community through seminars, workshops and student research that support Hughes’ believe in civil discourse and civic engagement. The Hughes Center also hosts political debates and operates the Stockton Polling Institute, gauging residents’ views on issues important to South Jersey and the state.

The hourlong film, titled “The Life and Legacy of William J. Hughes,” was produced by Glasstown Productions in Millville.  Bill Hughes' complete biography, and the film can be viewed on the Hughes Center website at stockton.edu/hughes-center.