Galloway, N.J. - Elizabeth Barstow Alton is best known at Stockton University for her tenacious and effective campaign in the 1960s to locate the college in South Jersey.

But the “founding mother of Stockton” developed and honed her leadership skills many years before, as an active participant in the Miss America Pageant, where she chaired the influential Hostess Committee, and in her many civic activities, including serving as president of the New Jersey State Federation of Women’s Clubs.

Now, a new book, “Beauty is Never Enough,” written by Alton and published by the South Jersey Culture & History Center at Stockton, provides a more in-depth view of Elizabeth Alton herself and life at the Jersey shore in the 1900s.

The book also provides an extensive and detailed insider’s view of the venerable Miss America Pageant as it evolved from a local Atlantic City tourism promotion in 1920 into a renowned nationally televised competition featuring women from every state.

Alton’s first contact with the pageant was in 1920, when at 13 she participated in the very first Boardwalk parade and got a sunburn and sore feet.

As a member of a prominent local family involved in many social and civic activities, Alton continued to follow the growth of the pageant. In 1945, she was invited to become a pageant hostess, a position of substantial social standing. In 1954, she was asked to co-chair the hostess committee. She became the sole chair in 1958, when she also became the first woman elected to the Pageant board of directors. She continued to chair the hostess committee until 1969, writing the rules that turned the chaperones into a well-organized system that governed the conduct and activities of the contestants. She was later the first female elected vice president of the Pageant board.

Perhaps most interesting to modern readers are the insights into efforts, sometimes thwarted, to enhance the public image of Miss America as an intelligent, accomplished young woman. Pageant director Lenora S. Slaughter, who took over in the 1940s, tried even then to eliminate the swimsuit competition but was consistently overruled by the all-male board that believed it was too popular. Victories included the addition of scholarships for the contestants, and having the winner photographed in an evening gown rather than swimsuit. 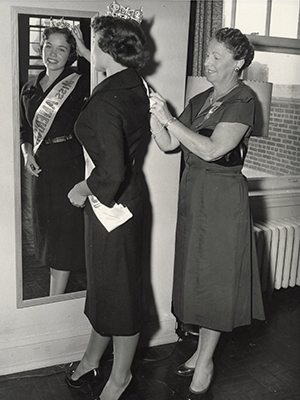 While she is very much a woman of her time, Alton also chafed at the restrictions placed on women and how their (and her) opinions and talents were often overlooked. But she also resented those who protested the pageant as exploitative, saying they did not appreciate what the scholarships meant to contestants who might otherwise never have attended college. As someone who interacted personally with the contestants and the winners, Alton was always impressed by their intelligence, charm and ambition.

“Reading about the pageant from both the perspective of a spectator and an insider – as Elizabeth came to be - provided fresh insights into the history and culture of this century-old tradition,” wrote Heather Perez, Stockton Special Collections Librarian, in the foreword to the book.

The book also includes Alton’s successful battle to locate a college in South Jersey, a story she also told at greater length in her 1983 book “The Stockton Story.”  Alton also served as the only woman on the Board of Governors of Rutgers and was the second chair of the board at Stockton, where the A-wing auditorium is named in her honor. A mural honoring her was installed at the new Atlantic City campus’ Alton Student Lounge

Alton ends “Beauty is Never Enough in 1995.  She died in 2006 at the age of 100. Her granddaughter, Karen Alton, brought the typewritten manuscript to Stockton.

“I spent a lot of time with my grandmother and she was a mentor to me,” Karen Alton said. “What really resonated with me about the book was how she would not take ‘no’ for an answer, and she believed in doing the right thing, even if it was not always popular.  She really was a pioneer. She was still speaking and writing well into her 80s and 90s.”

The book is available online through Amazon, Barnes and Noble and Second Time Books in Mt. Laurel.