Campers collect and catalog evidence at the "crime scene" on the first day of CSI Camp. (Photos by Susan Allen/Stockton University)

Galloway,  N.J. -  For 15 years Stockton’s CSI Camp has been teaching the intricacies of crime scene investigation by staging “murders” on campus and challenging high school students to solve them.

This year’s camp was so popular, a fourth session was added, and there is still a waiting list. 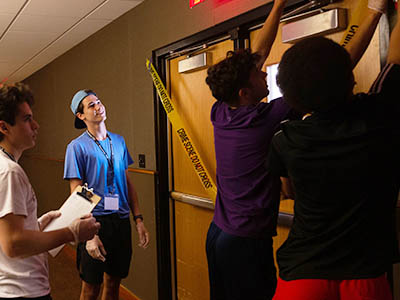 All that evidence, scattered throughout Alton Auditorium, where this year’s double homicide took place, taught campers on the very first day a very important lesson of CSI - it’s nothing like the television show, where a crucial piece of evidence may quickly become obvious.

In between they learn about fingerprinting, autopsies and auto accident investigations. They interview suspects and prepare the case for trial.  They also take field trips and meet with State Police, K-9 units, Federal Air Marshalls, a medical examiner and victim services providers.

“We get them involved in every step of an investigation,” Tartaro said. 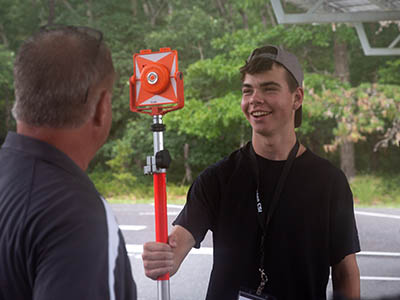 Last year’s camp was converted to a virtual Zoom experience by COVID, which opened it to a larger geographic area and even brought a student from Los Angeles to Stockton this year for the live camp.

“It is one of my top two interests,” he said, citing game development as number two.

He enjoyed learning how evidence is analyzed, and said his last murder was definitely the most difficult to solve because of an attempt to frame others for the crime.

Duntley and Tartaro modify the crime for every camp because students do attend more than once, and also share on social media.  They also recruit family, friends and staff to make an elaborate video of the crime, which is shown as the final event at camp to many oohs, aahs, and sometimes groans as campers realize where they were tricked, or which witness lied.

“This was such a great experience,” said Yarima Rosado of Puerto Rico. “The talks were amazing and everyone here was like family. I really wanted to learn more about this field and I feel like I do have a clear idea now of what it is like.”