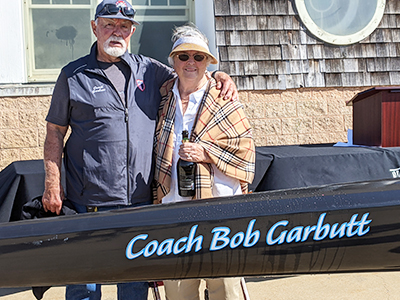 The “Coach Bob Garbutt,” the “Rows Ann Cahill,” and the “Sue Peterson Family” boats were purchased with funds raised from the Rowing and Growing event at Stockton and a grant from the South Jersey Charitable Foundation.

Bob Garbutt, former Atlantic City High School rowing coach, was honored at the first Rowing and Growing fundraiser in 2020.  Over a 40-year career Garbutt took the Atlantic City High School crew teams to 13 national championships, won the Stotesbury Cup eight times and finished second at Henley in 1994.  He and his wife, Judy, a teacher, were also mentors to hundreds of students.

Sue Peterson and her family have been active in rowing for decades. She is president of the Southern New Jersey Scholastic Rowing Association, which coordinates county championship regattas, and is also active with the Atlantic County Rowing Association. 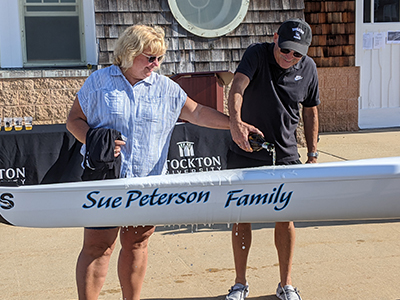 The “Rows Ann Cahill” boat is named for Rose Ann Cahill, a longtime rower and rowing supporter with the Viking Rowing Club in Ventnor.

“We row by her home and she comes out to cheer the teams on,” Stockton rowing coach John Bancheri said. “It’s nice, and it will be cool for her to see that boat go by.”

Lynne said she and President Harvey Kesselman appreciate what an ambassador Cahill has been for rowing and Stockton.

“She shows quiet leadership and professionalism,” Lynne Kesselman said. “She’s a real role model and a person who will always step up to help.”