Galloway, N.J.  - The coronavirus pandemic and resulting lockdown caused food insecurity to spike in Atlantic County, where workers were already struggling to feed their families, according to a student research paper published today by the William J. Hughes Center for Public Policy. 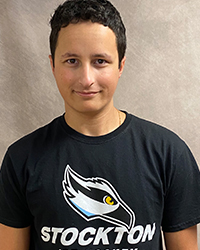 The research paper by Stockton University student Garrett Bolton found that economic conditions following the March lockdown threatened food security all over New Jersey. But Atlantic County was especially hard it because of the outsized impact of business closures on the Atlantic County casino industry and the regional hospitality economy, Bolton’s research found.

In April, Atlantic County’s unemployment rate rose to 33.8%, more than double that of the state (16.3%) and national (14.7%) rates. In June, the county experienced the highest year-over-year unemployment rate increase (379%) of any county in the United States, according to the paper.

The number of Supplemental Nutrition Assistance Program (SNAP) recipients receiving food stamps began increasing at the time it usually decreases as businesses gear up for summer tourism. The number of county residents receiving food stamps in April was 8% higher than in April 2019, and SNAP expenditures in Atlantic were 8th highest among the 21 counties in New Jersey.

But food stamp usage data did not fully reflect the impact on hunger in the region. Many casino and hospitality workers did not qualify for food stamps because enhanced unemployment benefits raised income above the eligibility threshold, according to the report. A number were forced to rely on food pantries. Local news media documented miles-long lines of cars waiting to receive free food baskets.

“Thousands of people (were) out of work and relying on unemployment to keep a roof over their head and food on the table but finding it difficult to do both,” the report said. “Food pantries have been the go-to resource for those who cannot buy groceries.”

By the end of June, the Community Food Bank of New Jersey (CFBNJ) had distributed nearly 70,000 emergency meal kits statewide. One of the main areas targeted for help was Atlantic County, with Atlantic City casino workers receiving more than 3,000 meal kits.

Between January and June, Atlantic County also had proportionally the highest rate of calls to the NJ 211 hotline for information on food assistance, according to the report.

“Behind all the statistics in this report is a portrait of real people grappling with the challenge of providing enough food for their families,” said John Froonjian, executive director of the Hughes Center.

The Hughes Center undertook the student research as a follow-up to a March Stockton University Poll that found that even before the lockdown, a significant percentage of Atlantic County residents struggled with food insecurity. Nearly one in five residents said they had run out of food and did not have money to buy more right away, while 14 percent had skipped a meal because they could not afford to buy food, according to the poll. Among those with children, 17 percent had skipped a meal so that their children could eat.

“The Hughes Center poll showed that food insecurity was a problem in Atlantic County before the pandemic struck, when times were still good. Our new research shows that the coronavirus lockdown created a food security crisis,” Froonjian said.

About the Hughes Center
The William J. Hughes Center for Public Policy at Stockton University serves as a catalyst for research, analysis and innovative policy solutions on the economic, social and cultural issues facing New Jersey. The Center is named for the late Ambassador William J. Hughes, whose distinguished career included service in the U.S. House of Representatives, Ambassador to Panama and as a Distinguished Visiting Professor at Stockton College. The Hughes Center can be found at www.facebook.com/Hughes.Center.Stockton.College and can be followed on Twitter: @hughescenter.