Leo Ullman and family (seated) and Holocaust Center staff and supporters at dedication of the film and exhibit. Below: Joe Petrilli who created the Athletics Docuseries.

The Telly Awards showcases the best work created in television and video. The competition receives 13,000 entries from all 50 states and 5 continents. Telly Award winners represent work from advertising agencies, television stations, production companies and publishers from around the world. 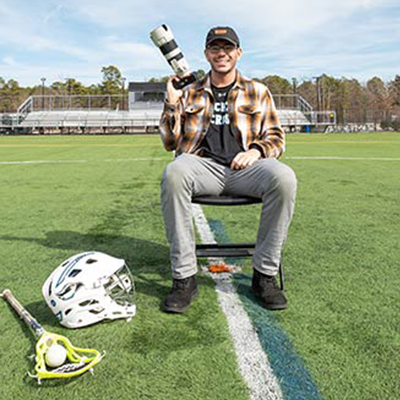 Seven awards went to the film “There Were Good People ...Doing Extraordinary Deeds: Leo Ullman's Story,” produced by the Sara and Sam Schoffer Holocaust Resource Center at Stockton. The film told the life story of Leo Ullman and his family who were hidden in the Netherlands and saved by Righteous Gentiles during World War II.

Toby Rosenthal, Stockton University Visiting Instructor of Communication Studies, was the editor, director and story producer of the film.

“Now, more than ever, we need to continue recognizing creators like you and those that bring global stories to our screens," the council said in its notification letter. The awards were:

The Holocaust Resource Center's staff, including Director Gail Rosenthal, Morgan Everman and Irvin Moreno-Rodriguez, provided research and resource materials for the film. The School of Arts and Humanities and School of General Studies, University Relations and Marketing, and Stockton Video Production also contributed.

The film can be viewed as part of the larger Ullman exhibit at the Holocaust Center, located in the Bjork Library at Stockton.

“This is a truly excellent documentary and thoroughly deserves this acclaim,” said Stockton Dean of General Studies Robert Gregg. “Gail Rosenthal should be recognized for her crucial role as the moving spirit behind the film.”

“This accomplishment is a testament to the hard work, creativity and professionalism of the entire Productions Services team, as well as University Relations & Marketing and all of the partners that play a role in our production of high quality, impactful videos,” said Director of Production Services Mark Jackson.

Below are the awards received and the links to view them on YouTube:

“A Day In The Life” Non-Broadcast: Educational Institution
https://www.youtube.com/watch?v=RKoaPbAYXIU