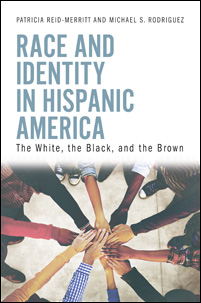 Authors Patricia Reid-Merritt, Distinguished Professor of Africana Studies and Social Work; and Michael Rodriguez, associate professor of Political Science, say the book offers both an historical and contemporary analysis of racial and ethnic identity formation over several generations, examining how various populations attempt to integrate themselves into mainstream American culture.

"I've taught courses on race and culture for more than 40 years at Stockton. I have a particular interest in understanding the role that race plays in every aspect of American life.  Historically, here in the U.S., we

have operated by a rather narrowly defined, socially-constructed conception of race.  You were either White, Black, Native American or Asian,” Reid-Merritt said. “But as the nation continued to expand with large numbers of Spanish-speaking citizens, questions emerged:  What racial group do they belong to?  The response to this question has been controversial, convoluted and confusing, both to members of the Hispanic/Latino communities and to the larger population, as well.”

“Students would often enter my class and when asked to self-identify their racial group, they would respond ‘Hispanic.’ When further discussing the difference between racial and ethnic groups, many students appeared perplexed.  Others were quite clear,” Reid-Merritt continued. “I vividly recall a student walking into my class on the very first day of my ethnic/race course. ‘Let me introduce myself. My name is Juan and I am a white Puerto Rican!’”

It was then that she realized this was a subject that needed further research and scholarly discourse. As an African American, Reid-Merritt said it was important to her to give a voice to the sizable Afro-Hispanic/Latino populations as well to those, who by virtue of their "Brown" complexions, acknowledge contributions of their African ancestry.

“It is my hope that this book provides insight into the very diverse nature of the Hispanic/Latino community and the recognition that both racial and ethnic identity have significantly impacted the view of themselves as well as how they are perceived by others," Reid-Merritt concluded.

Rodriguez regularly teaches a course at Stockton that focuses on how people think about race, particularly in terms of the underlying assumptions of race discourse in the U.S.

When reflecting on the course and the questions it poses on race, he says, “Is it a fixed essence or a socially constructed identity? The first assumption is largely discredited by scholars but still resonates in the popular imagination. The second is highly political and fluid because identity is not just self-identity but also how we are defined by others. Who decides one's identity, the individual or others, and what should be primary - self-definition or other-definition? I am fascinated by how students grapple with the complexities of these questions both personally and intellectually.

“The book bears witness to my own intellectual journey in matters of identity.  As a fourth-generation Mexican American, my family has been in the United States since the annexation (or, incorporation) of Texas. I am often bemused when asked where I am from,” Rodriguez said. “My usual response of ‘I'm from Texas’ is often met with the rejoinder, ‘No, but where are you really from?’ That's when I smile and say, ‘San Antonio.’ That exchange reveals a misconception about Hispanics the book attempts to dispel - that Latinos are ‘in’ but not ‘of’ this country.”

The book is available for purchase here.