Meg White, associate professor of Education at Stockton, recently collaborated with colleagues to publish the book, “William Frantz Public School: A Story of Race, Resistance, Resiliency, and Recovery in New Orleans,” which highlights the amazing stories of school desegregation in New Orleans and the impact of Hurricane Katrina on public education.

“We have recounted public education in New Orleans from the late 1930s to the present via a place-based narrative centered on this school. The book focuses specifically on issues related to race, poverty and the privatization and charter movements,” White said.

White, who has been at Stockton since 2013, said the research for this book began three years ago.

“What started out as research for an article, soon became an idea for a book. Many people have written about civil rights, segregation, white flight and New Orleans during pre- and post-Katrina. But what we learned in our research is it’s hard to isolate these stories,” White remarked. “To understand what happened in New Orleans requires one to know the whole story and how it is interconnected. What happened in the 1950s and 1960s had a direct impact on the next 50 years, especially with regard to public education.”

It’s important to know where we came from so we can be better about where we’re going.

Much of White’s work at Stockton focuses on recruiting and training pre-service teachers to be effective educators in urban environments. “I am an advocate for public education and our work in the School of Education prepares students to succeed in whatever environment they choose to teach,” she said.  “Most teaching vacancies are in urban areas where we need our most dedicated and prepared teachers. Our program strives to fill this need with students who have had a variety of fieldwork experiences and are prepared from day one to teach in any classroom.”

When asked what she hoped a reader would take away from the book, White said, ”I hope readers would gain an understanding of how systemic racism - evident in New Orleans in 1960 when a Black six-year-old girl named Ruby Bridges entered the doors of William Fra 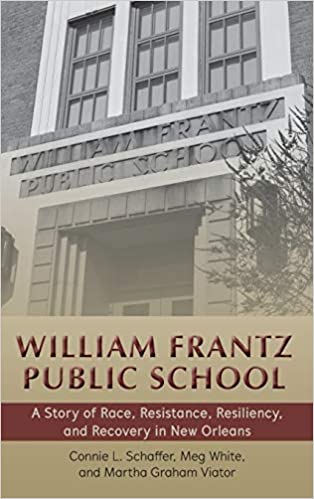 ntz Public School and faced a crowd of angry White protestors, to 2003 when, after the devastation of Hurricane Katrina so-called educational reformers seized the opportunity to turn New Orleans Public Schools into an almost all charter-school network - has had a strong voice in our history. While our book focuses specifically on New Orleans, a similar story of systemic racism can be told about so many urban cities in this country.”

White also reflected on why these stories are still relevant now, saying, “It matters that society has historically marginalized Black students and continues to do so. It matters that attempts to dismantle systemic racism in schools and other institutions still face strong resistance and these issues continue to deeply divide the United States. It matters that discrimination and systemic racism in public education is indicative of that which occurs in other social institutions. It’s important to know where we came from so we can be better about where we’re going.”