The team of Vincent Nelson from Bayville, Geno Copertino from Brigantine and Alex Lee from Linwood was ranked sixth in the conference going into the playoff tournament. The games were played remotely from March 16-18. 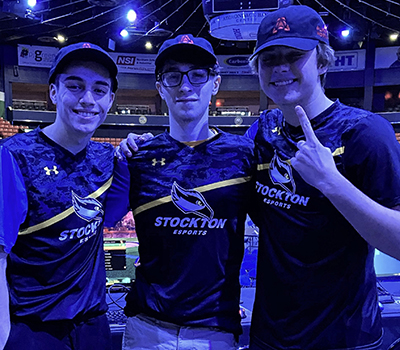 “Stockton’s Rocket League team has consistently performed at an extremely high level, winning several tough match ups to make it into the 2020 CRL playoffs, and ultimately defeating Rowan in the semis.  They really stepped their game up this season and are playing so well together.” said Demetrios Roubos, esports program manager and coach, and Associate Director of Information Security at Stockton.

The same team also won the Alpha North Esports “Battle of the Colleges” on Feb. 8 at the Adirondack Bank Center in Utica, New York.

“We are really proud of the success of our esports teams,” said Stockton Chief Information Officer Scott Huston, who helped organize esports at Stockton. “We are only in our second year, and Stockton esports teams have already developed a national reputation.”

Stockton esports also compete in Fortnite, Overwatch, League of Legends, Smash Brothers and Hearthstone. In 2019 the Fortnite team won the ECAC Championship.  More information on esports at Stockton is at esports.stockton.edu.