Galloway, N.J. - The Stockton labs were busy over break as more than 150 girls in 6th-8th grade spent a day in college during the fourth American Association of University Women (AAUW) Tween Tech. The program offered workshops in science, technology, engineering and math, and is sponsored by Stockton's School of Education. Dean Claudine Keenan said the fourth annual program introduced girls to STEM fields through interactive and fun workshops, many taught by women in those fields including Stockton faculty. 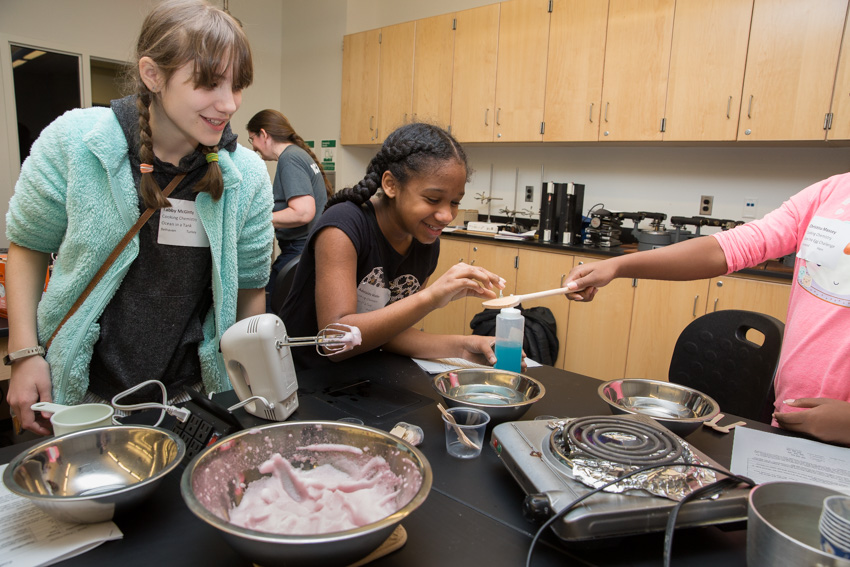 Professor Elizabeth Pollock wore the message, “Chemistry is a lot like cooking—just don’t lick the spoon,” on her shirt. Tweens got a taste of science, literally, as they cooked up chemistry with edible ingredients in Pollock’s workshop. Gelatin-based caviar in a variety of colors and hot cocoa were on the menu. 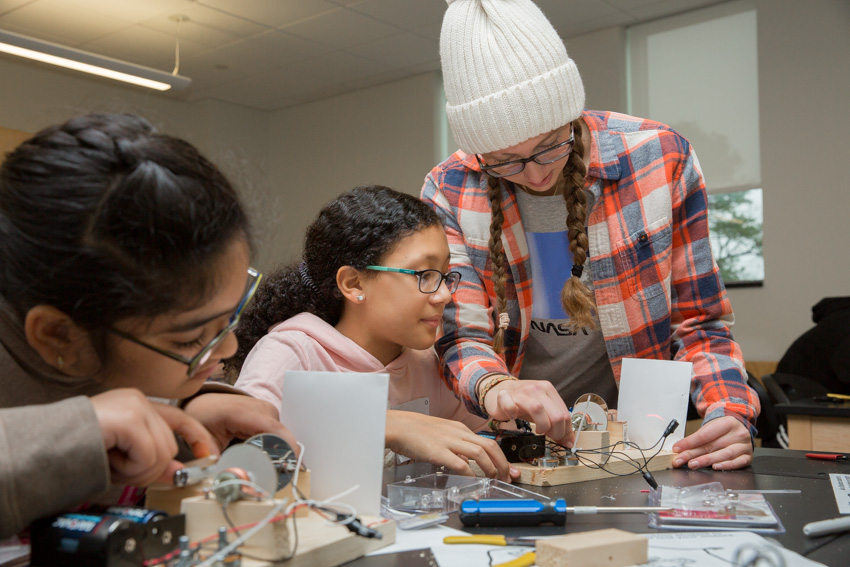 What happens when two sine waves collide at a right angle? The answer is a Lissajous figure, which is better seen than described. Professor Joseph Trout helped students create their own figures by generating them with a laser beam powered by an electric motor. Sine waves are simulated as a laser beam is directed at one of two oscillating mirrors positioned perpendicular to each other. The beam reflects from the first mirror onto the second mirror and then draws a spiraling circle pattern on a paper screen. 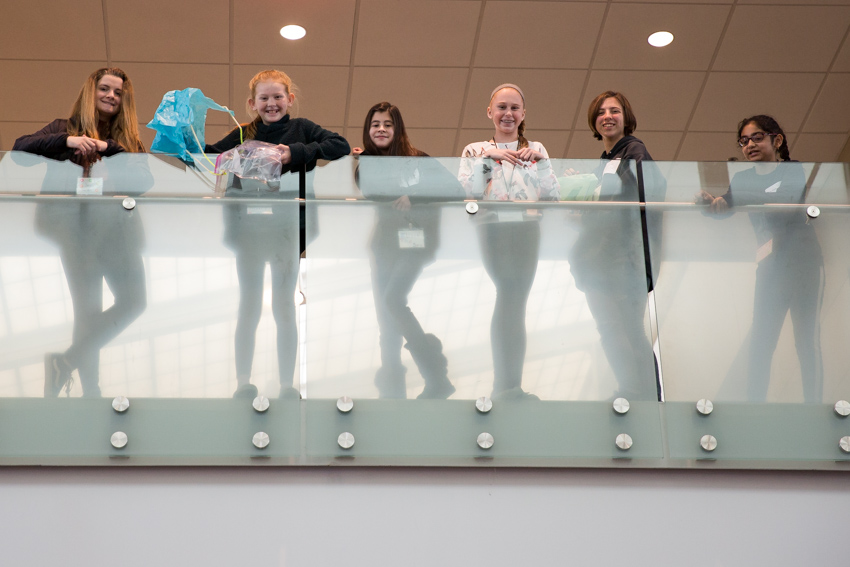 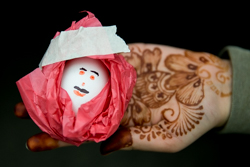 Countdown 3, 2, 1…egg drop. Precious cargo was intentionally dropped from the Campus Center balcony to test parachute designs. The engineers anxiously awaited safe landings. Jackie McGuinness, a teacher at Burlington County Institute of Technology, stood alongside a plastic sheet at ground zero of the testing zone. As soon as each egg landed, the girls quickly made their way downstairs to see the results. McGuinness carefully untangled the parachutes and unwrapped the eggs, revealing their painted faces. Teams with cracked eggs went back to analyze where the parachute failed and crafted re-designs. 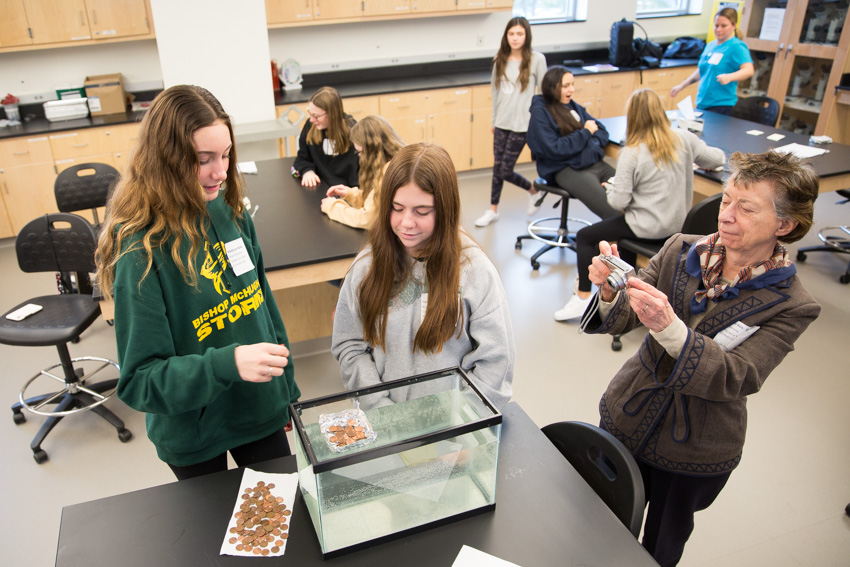 Professor Anna Pfeiffer-Herbert compacted a piece of aluminum foil and dropped it into a tank of water. As it sank to the bottom, she challenged the girls to build a buoyant boat from just a piece of aluminum foil. Each design was given the chance to float, and seaworthiness was measured in how many pennies it could carry. It took 79 pennies to sink one of the best designs. 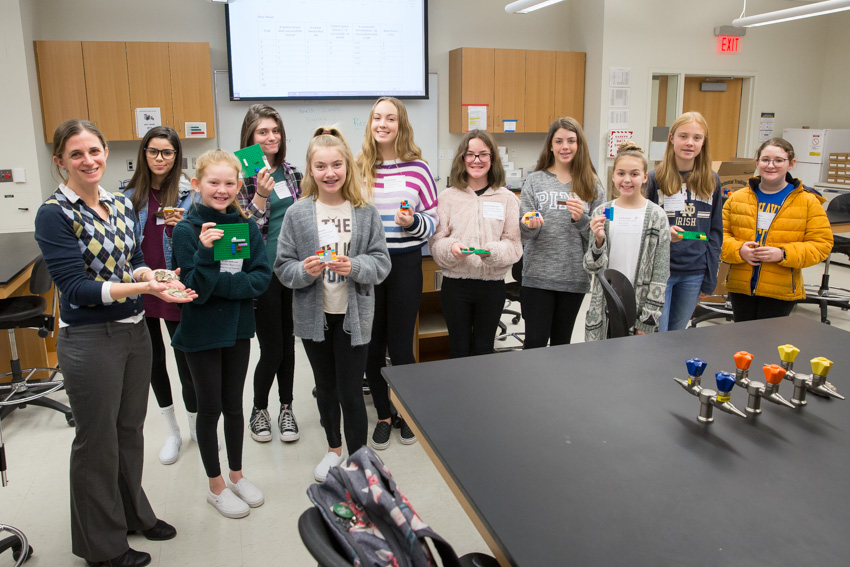 Oysters were once so abundant, they could filter all 18 trillion gallons of the Chesapeake Bay in a few days. Overfishing and disease have caused a population decline, but Professor Christine Thompson is working out how to help bring them back. She refers to oysters as “ecosystem engineers” for their ability to create reef habitat that supports a variety of marine life and can help to stabilize shorelines. Students simulated how oysters reproduce and build reefs through musical chairs and Legos. When the music stopped, anyone who was next to a base added their Lego piece to simulate recruitment of larval oysters to a reef. A dice roll then added fate. A cold winter, hot summer or too much rain removed Lego bases from the reef, and favorable current, lots of food and no predators added bases to the reef. After a few rounds, 70% of the larvae had settled on a Lego base and survived the environmental conditions. 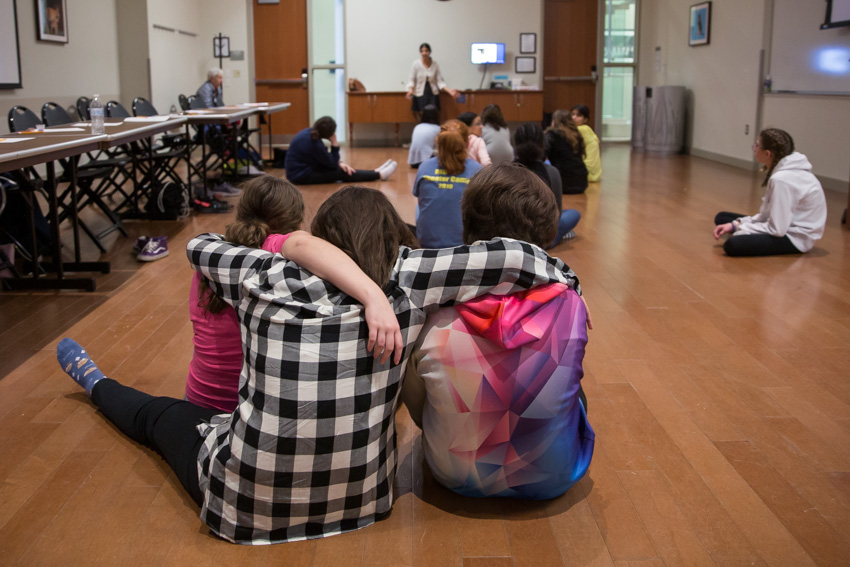 Girls sat quietly as they counted the beats in a song. Professor Shanthi Rajaraman helped them explore the space where music and math meet.  Students listened carefully to hear how musical rhythm moves in patterns.