Almost 100 students from Atlantic City, Pleasantville, Egg Harbor Township and Absegami High Schools participated in the event, which included a panel discussion and small group discussions on the theme “The Role of Youth in the Movement: Changing the Disenfranchised to Engaged.” 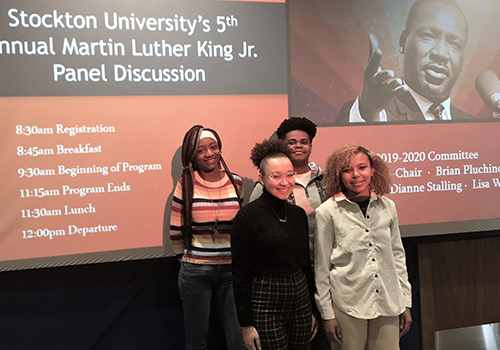 “We continue to be challenged by incidents that question the progress we have made,” said Brian Jackson, chief operating officer for Stockton Atlantic City. “We need to listen, understand and interact with each other. There are roles for each of you.”

Brian Pluchino, assistant director of residential life at Stockton, led the panel and began by asking the four students what they see as the role of young people today.

“We have the stamina and optimism to make change,” she said.

“We have to keep each other positive to make positive change,” said Tanijah Smith, 15, a sophomore at Pleasantville High School.

“We can take the baton that has been passed on to us and take it to another level,” said James Scott, 18, a senior at Absegami High School.

The students said they have felt disenfranchised, or not heard, though there are also people who welcome and support them.

“We have to be open to new ideas and what we can do together, and how we can have the most impact,” said Mecca Muhammad, 18, a senior at Atlantic City High School.

Todorovski said there are many ways that people feel different besides age, including where they come from and their experiences.

Pluchino noted that non-whites will make up about a third of all voters in the next election, the largest percentage ever. He asked the students if that would be a motivation to get involved.

“We know that people say their vote won’t count, but we have to raise awareness that it will matter,” Todorovski said, adding that making sure everyone has access to polling sites is also important.

“It does give us hope that our opinion will matter,” Muhammad said, “especially young people who don’t like what is going on in the country.”

Students encouraged creating safe spaces where people can share their opinions and talk openly, whether it be at school or in the community.

“We have to create a safe space where people can safely speak their minds and create the opportunity to make change,” Scott said.

“Sometimes we are afraid to speak up because no one wants to be ‘that person’ who speaks out,” Muhammad said, adding that safe spaces should also encourage listening.

“The ability to listen and accept other opinions is part of a safe space,” she said.

Smith said the first safe space can be at home, where parents can encourage discussion and build confidence, and several students said they were encouraged at home to speak up.

“What I say may change the world slowly, but surely,” Smith said. “You change your school, your community. I keep that mindset.”

Students also talked about the difference between fact and opinion and struggled at times to define the difference. They said while some facts may be universal, others may be affected by context or experience.

“Looking at a fact from different perspectives can change it,” Scott said.

“If something is a fact to me, I’m going to believe what I believe,” Muhammad said.

This year’s panel was held in the Fannie Lou Hamer Event Room, named for the Mississippi civil rights activist who spoke at the 1964 Democratic Convention in Atlantic City in protest of the all-white state delegation.