Galloway, N.J. - Lt. Tracy Stuart opens the rear passenger door of her police vehicle and sitting next to Stockton University’s favorite chocolate lab is a young golden retriever waiting anxiously for her name to be called.

“Come on Freya,” Stuart said, and then with puppy energy, Stockton's K-9 in training sprang into action from the back seat to scope out the Pomona Road athletic field.

Veteran K-9 Hemi peeked through the seats to watch out the front window. The sun highlighted a few silver strands in the chocolate fur around his face. On June 22, the two-time USPCA National Detector Dog champion will celebrate his 11th birthday, making him nearly 65 in dog years. 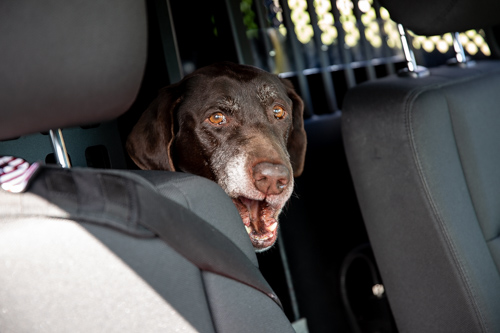 A few minutes prior, Stuart had stashed a small bag of gun powder, known as a “hide,” four feet high on a chain link fence and a towel in her back pocket. As Hemi prepares for retirement, Stuart is training Freya to become her new K-9 partner.

Stuart paused at the field entrance with Freya, and then looked back to say, “okay, we’re going to start the search.”

They entered the field in detection mode to run a search drill.

Stuart guided Freya who sniffed the ground and air. As the handler, Stuart must calculate how scents are traveling in the wind and make sure her K-9 sniffs high and low and into every crack and crevice.

“It’s my job to make sure my dog’s nose gets everywhere it’s supposed to get. If the odor from the compound isn’t hitting the air, the dogs don’t have the opportunity to get it. You’ve got to work hard to get the dog’s nose to a seam because the odor might be stuck in one little nook or cranny,” she explained.

As they reached the fence, Stuart drew her hand up along the posts and said, “up.” Freya followed her command by leaping up to sniff. They traveled down the entire length of the fence until Freya honed in on a strong scent and sat down.

Stuart reached into her back pocket for the rolled up towel and rewarded Freya with a little tug-of-war play.

Freya has been training in a variety of locations, but this was the first time on the athletic field.

“If a dog hasn’t trained it, they might not know it, so that’s why it’s so important for dogs to be introduced to so many environments with different sounds and odors. They say dogs see in pictures. It’s important to introduce as many different pictures to your dog as possible and it becomes part of their file cabinet,” Stuart said.

Stuart and Freya were supposed to start the State Police Canine Academy on March 16 for a 14-week class, which has been postponed. In the meantime, the two are training locally to get a head start. 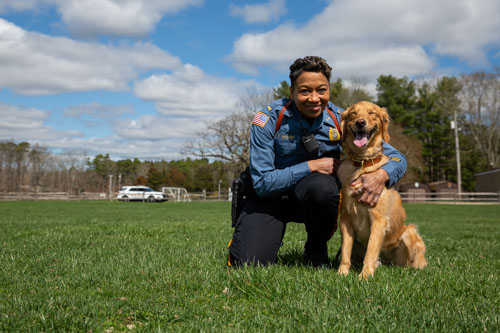 Their focus now and at the academy is on imprinting odors of explosive compounds. “When you introduce a dog to an odor repeatedly and it enters their memory bank, it’s called imprinting,” Stuart explained.

When Freya was tested to determine if she could be a K-9 candidate, she immediately proved that she has “an unlimited amount of potential."

Freya and Hemi are both very social, being in the lab family, but they have unique personalities.

Stuart discovered Freya’s sass one night when a motion sensor light kicked on and she lunged toward the shadows of the woods. “She went right for them. She’s protective, but sweet too,” Stuart said.

The name Freya means strong, beautiful lady. “Every day, I see how that name is so fitting,” she said.

Hemi and Freya are both foodies, but Stuart makes sure they eat healthy. Their favorite snacks are bananas, apples and baby carrots. Much to Stuart's dismay, Hemi also enjoys an occasional bonus snack from the Big Blue bleachers after sporting events.

Some days she finds them snuggled together and other days Hemi steals Freya’s blanket and balls it into a pillow (even though he has his own Wonder Woman and Scooby-Doo blankets). They constantly keep Stuart entertained.

“Hemi will never be replaced. Freya is his successor,” Stuart said.

At the thought of Hemi’s retirement, Stuart held back emotions. For nearly a decade, Hemi has been by her side every day at work and home through the good times and challenges.

Four-year-old Freya has big paws to fill, and she can’t wait to meet everyone on campus.

Watch one of Freya's Training videos.