Author Says Fight to Ratify ERA is Not Over

Galloway, N.J. – It is not too late to finish the fight for the Equal Rights Amendment, Professor and author Julie Chi-ye Suk told an audience of more than 500 at the virtual Constitution Day lecture held this year on Sept. 22 via Zoom.

Suk, a professor of sociology, political science and liberal studies at the Graduate Center of the City of New York, and author of the book “We the Women: The Unstoppable Mothers of the Equal Rights Amendment,” said the U.S. Constitution has many “founding mothers.” 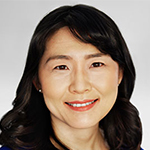 “The book tells of the generations of women who should be recognized,” Suk said. “They were forgotten, but they were unstoppable.”

Stockton Professor of Political Science Linda Wharton, who coordinates the annual Constitution Day lecture, said Ginsburg was a fierce advocate for the ERA.

“As a legal scholar she worked tirelessly for equal rights,” Wharton said.

Suk said Ginsburg is a “founding mother” for the work she did on equal rights, but that she stood on the shoulders of many women before her.

Suk cited the Seneca Falls Convention of 1848 as the first women’s rights convention in the United States. That event launched the women’s suffrage movement to ensure women the right to vote, which was not ratified as a Constitutional Amendment until 1920 after decades of work by hundreds of women.

The first version of the ERA was written by Alice Paul and Crystal Eastman in 1923, and after decades of debate was reintroduced by Martha Griffiths in 1971. However it had difficulty obtaining the required ratification by 38 states by the extended deadline of 1982.

Suk said the story of the political stalling and anti-ERA movement is also important and demonstrates how men in power made passage difficult and how even some women, including, most famously Phyllis Schlafly, opposed it.

The ERA did gain the three additional states in 2017, 2018 and 2020, but the debate now is whether the deadline should be extended again to allow for the additional three states to count, or even whether there should have been a deadline at all.

“It’s not too late to complete the work,” Suk said. “It is more urgent than ever before.”

Stockton President Harvey Kesselman also paid tribute to Ginsburg. He had cited her as an example of fighter in his 2018 Commencement address, a recorded portion of which was included in the program.

Interim Provost Michelle McDonald, who introduced Suk, recalled her great-grandmother, who died in 1998 at age 101, and how she and her sister, as children, would try to list “all of the things that were younger than Nana.” Nana would have been 23 when women got the right to vote, McDonald said.

“She worked to put both of her daughters through college and I thought of her when I read (Suk’s) book.” McDonald said.

Constitution Day is sponsored by the American Democracy Project/Political Engagement Project, Office of the Provost, Office of Development & Alumni Relations and the Stockton University Foundation & the William J. Hughes Center for Public Policy.

A recording of the talk can be viewed at:  https://stockton.zoom.us/webinar/register/WN_893x2U0GTNqwaxSnca-j6g