Galloway, N.J. – Early Monday morning, Stockton’s Unified Science Center smelled of cocoa butter and almond oil. The grooving bassline of Billie Eilish’s “Bad Guy” coupled with giddy laughter could be heard echoing through the halls as a group of middle school girls created their own lip balms during the first day of the fifth annual Tech Trek summer camp.

“Science can be overwhelming, especially to this age group,” said Ashley Brown, volunteer teacher at Tech Trek leading the cosmetic chemistry workshop. “We’re trying to help them see the fun in science by utilizing stuff that they use every day, like lip balm.” 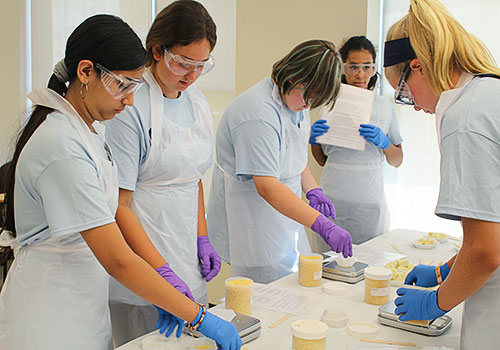 The goal of Tech Trek is to give girls the opportunity to immerse themselves in a world that empowers and encourages them to think about themselves as future scientists, engineers, mathematicians, and computer specialists. Stockton faculty, staff, students, and alums participate by leading classes on STEM topics.

While Brown’s class worked to craft the perfect lip balm recipe, other campers started building rain barrels out of recycled car wash containers, which they would install at the Cape May Zoo during a field trip on Friday. 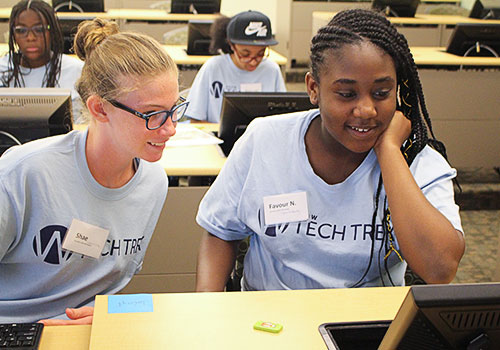 The group also learned all about global and local water issues, even exploring the water crises occurring within their own hometowns and the methods they can take to improve the water supply.

Another group of campers delved into the world of aerospace engineering, building their own model hot air balloons out of tissue paper.

Madison Hardiman, a junior at the Peddie School in Mercer County, attended Tech Trek in 2016, and returned this summer to assist with the aerospace engineering workshops. 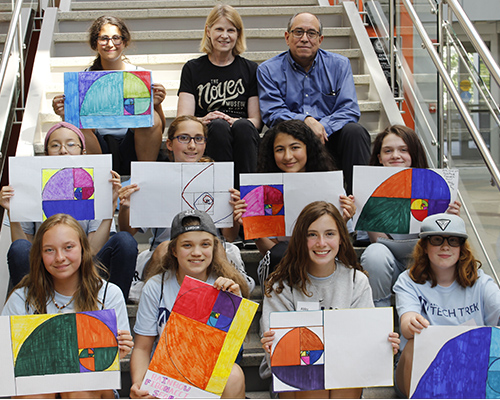 “This camp changed everything for me,” she said. “It made me interested in possibly becoming an aerospace engineer or a fighter pilot for the Navy. When I was here, we visited the Philly airport. I got to ‘land’ a plane, and that was when I knew what I wanted to be.”

Other participating campers engaged in a cybersecurity workshop that addressed the growing issues of cybercrime and identity theft, and even included some computer games. The computer lab was adorned with posters of women in technical fields that read, “Why not you, girl?”

Systems engineer Brian Stein and Saskia Schmidt, director of education at The Noyes Museum of Art  turned STEM into STEAM, leading a workshop that injected art into the math and science theme. In the "Designs of Nature: The Fibonacci Sequence"  workshop, the girls created an artwork based on the Fibonacci sequence, a math formula that describes spiral growth patterns in nature, such as leaves on a stem and seeds in pinecones and flowers. 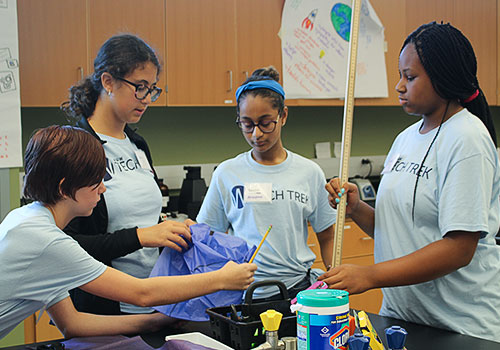 Tech Trek also gives the girls the opportunity to meet and learn from women holding STEM positions. Christina Young, industrial engineer at the Federal Aviation Administration (FAA), Mary Delemarre, electronics engineer at the FAA, and Theresa Basquez, project manager at Veracity Engineering, gave insight into working in STEM. All were enthusiastic about their career choices, and attributed their interest in STEM to their early affinities for problem-solving and puzzle-solving. They encouraged campers to pursue their interests, especially if they are equally as passionate.

This year, the camp extended to the new Stockton Atlantic City campus, and campers got the opportunity to do science on the beach. They also took a trip to the Cape May Zoo where they installed rain barrels they  made during the week.

“Girls who attend this camp tell us every year that they are inspired and motivated to continue pursuing their passion for science, technology, engineering and math,” said Claudine Keenan, camp coordinator and Stockton School of Education dean. “The role models and peers they meet sustain their commitment during inevitable experiences of subtle discouragement or implicit bias. They make lifelong friends and network with other women who also continue to mentor them.”