From left, Brigid Harrison, Senate President Steve Sweeney and John Froonjian discuss the future of the state during a Town Hall at the Stockton Atlantic City Academic Center. 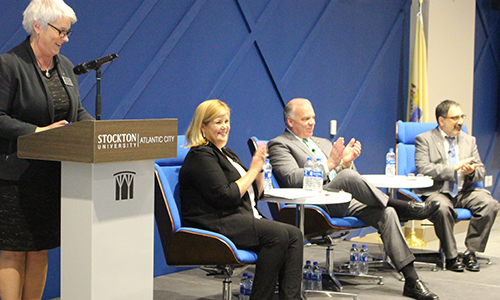 The event was co-sponsored by the Southern New Jersey Development Council and the William J. Hughes Center for Public Policy at Stockton. It was moderated by Stockton alumna Brigid Callahan Harrison, a political science and law professor at Montclair State University and John Froonjian from the Hughes Center.

Stockton President Harvey Kesselman said he was pleased to give the public a chance to hear and question Sweeney. 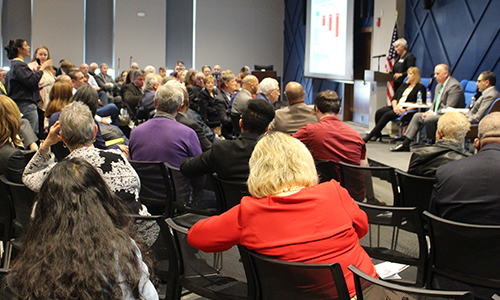 “It is the role of a university to be a marketplace of ideas,” he said. He said he had recently met with other state college presidents, and all agreed that Sweeney has been influential in having a positive effect on higher education in New Jersey.

Marlene Asselta, president of the SNJDC introduced Sweeney, who spoke about how he got involved in politics and outlined the issues he believes are critical to the state’s future.

Following his presentation, Sweeney fielded questions from the audience, including Stockton social work major Keyuana Griffin asked why college is so expensive. Sweeney said it is because the state has not supported the colleges.

Other questioners asked about the future of the pension system, the proposal to consolidate school districts, esports opportunities in Atlantic City, future plans for the Atlantic City International Airport, and the state’s role in Atlantic City.

The Atlantic City event was one of several town hall meetings Sweeney has held around the state.

A video of the town hall event can be viewed on the Hughes Center website at: