Above, Onel (center in red) and her class. Below, the first place winners.

Galloway, N.J. – What’s the most sustainable way to pack a sandwich?

Every year, students in Assistant Professor of Business Studies Naz Onel’s Sustainability Marketing class create videos relating to different aspects of sustainability and present them at a free, open to the public showcase, where audience members vote their favorite. 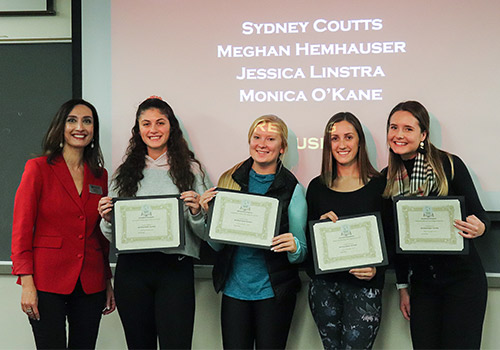 In their winning video, O’Kane, Linstra, Coutts and Hemhauser portrayed multiple versions of the same scenarios and prompted viewers to guess which versions showed the most sustainable decisions. In one scenario, Hemhauser prepared a sandwich before heading to class. In one version  she put the sandwich in a plastic bag, and in another, she put the sandwich into a tupperware container. The correct choice was the tupperware because of its reusability.

“Creating videos like this sets the tone for everyone,” said Coutts, a junior marketing major from Kinnelon, New Jersey. “These videos catch people’s attention, make them take note, and hopefully continue on with the message.”

The winning group received a bundle of sustainable goodies – eco-cups, chocolates and more – nestled in a reusable bag.

“This semester’s students were all brilliant,” said Onel. “They’re really trying to make the world a better place.”