“We know there are issues of vulnerability for people and the economy,” McCabe said. “We think about this a lot at the DEP.”

The event, hosted by the William J. Hughes Center for Public Policy and the Coastal Research Center at Stockton, covered topics related to coastal issues in New Jersey.

McCabe said the impact of climate change for shore communities is a topic everyone should take very seriously. She said sea walls and dunes have been effective but more will need to be done.

“We have hard choices ahead of us,” she said. “That’s why we need a coastal resiliency plan. We’ll have to look at where the funds can be most effective.” 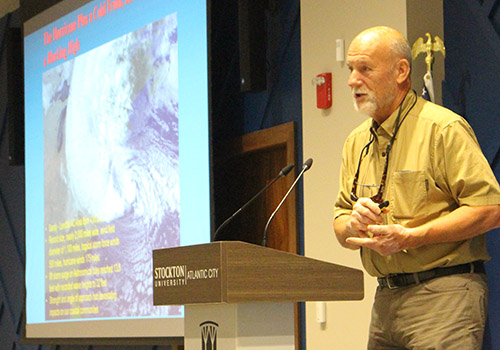 McCabe said while the state of New Jersey beaches and ocean water quality are outstanding, issues including plastic pollution, clinging jellyfish, vibrio bacteria and algae blooms are affecting different areas of the state.

“The effects (of climate change) are being felt all over,” McCabe said.

She applauded towns that have taken steps to curb plastic pollution, and said she has been carrying reusable bags herself for 20 years.

McCabe stressed that the state will continue to fight any efforts the allow ocean drilling of the coast of New Jersey or even testing for wells.

She said the state looks forward to working with Orsted on its proposed offshore wind project, which was recently approved as a pilot project in New Jersey.

McCabe also addressed implementing public access laws to make sure everyone in the state can get access to a beach, and efforts to reduce pollution from vehicles, which makes up 40 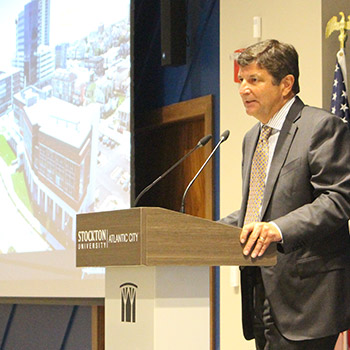 percent of emissions in the state.

She said the beach access issue encompasses not just beaches, but also amenities like parking and bathrooms.

“Ocean policy has been a love of mine for years, back when a group started called SOS for Save Our Seas that was concerned about all the beaches being closed (because of contamination),” Hughes said. “Now there are new crises.”

Stewart Farrell, executive director of the Coastal Research Center at Stockton, said the center monitors the status of 171 beaches along the Jersey shore, and that federal and state funds have helped replenish sand lost to erosion and storms. 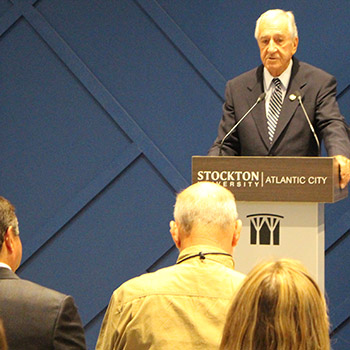 He cited towns like Avalon and North Wildwood that have pioneered the use of back passing, to return sand from where is has collected, to where it washed away.

“It is effective and it does redistribute the sand,” Farrell said.

Rutala said coastal resilience efforts are also a growth industry opportunity for Atlantic City. He cited centers in North Carolina, Virginia and Connecticut that are receiving large grants to do research.  He said Stockton, with its Coastal Research Center, Polling Center, and Levenson Institute for Gaming, Hospitality and Tourism, plus related academic programs, is well suited to host a coastal resilience center.

A feasibility study for the New Jersey Economic Development Authority is expected to be completed by the end of August, and while a full center would take more than three years to develop and build Stockton could establish a Coastal Resiliency Incubator at the Atlantic City campus much more quickly.

“A lot is happening in a short period of time,” Rutala said. “This is important for resiliency, but also for economic development. Atlantic City has a lot to protect.”

John Froonjian, interim director of the Hughes Center, said as the July 4th holiday approaches and the summer beach season gets into full swing, it is important to examine the condition of New Jersey’s beaches and related issues which play a crucial role in the state’s tourism economy.

After her talk, McCabe answered questions from the audience and Froonjian.