Above, the Lohbauers smile for a photo in their matching shirts. Below, see snapshots from Pinelands Summer Short Course classes.

Hammonton, N.J. – Christopher Lohbauer of Pennsauken is a six-year-old birdwatcher, hiker, kayaker, and nature aficionado with an impressive knowledge of the landmark New Jersey Pinelands. He is, sometimes literally, following in the footsteps of his grandfather, Mark Lohbauer, Pinelands Commissioner and environmentalist.

Clad in identical navy blue and white polo shirts, the Lohbauers stepped through the doors of Stockton Kramer Hall in Hammonton on July 18, eager to spend the day learning all about their favorite ecosystem at the third annual Pinelands Summer Short Course. This was the second year that the duo has attended what has become a tradition and bonding activity for them.

“I am excited for the blueberries!” said Christopher Lohbauer, referring to the Atlantic Blueberry Company tour on Weymouth Road happening later that day, where attendees receive a tour of the company’s blueberry factory and fields. 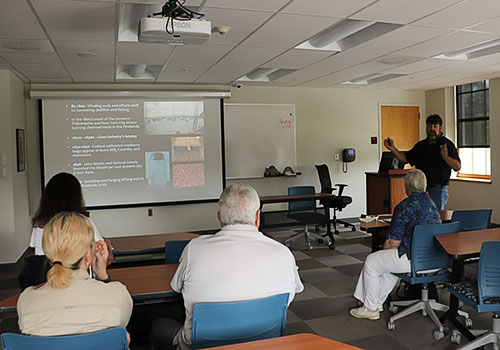 d by the N.J. Pinelands Commission and Stockton University.

This year, Joel Mott, principal public programs specialist at the N.J. Pinelands Commission led a discussion titled “Pinelands 101,” where he detailed the history of the Pinelands. He discussed former booming industries – like charcoaling and ironworks – and how they led to tourism in the area, and he also discussed revolutionary battles and other skirmishes that took place there. He also revealed a few fun facts about the Pinelands.

“Mason jars actually come from the area,” he said to a surprised audience. “In 1858, John Mason, a tinsmith, and Samuel Crowley, a glassblower, worked together and invented the Mason jar somewhere near present-day Green Bank, New Jersey. Now you know!”

Environmental educator and bird enthusiast Josh Grant presented a slideshow on “Backyard Birds,” detailing facts about birds common to the Pinelands. Grant touched on bird sounds, bird habits, and even bird camouflage, such as the female cardinal’s dull appearance serving to deter predators from making them their lunch.

William Zipse, supervising forester of the New Jersey Forest Service (NJFS) led a session titled “Game of Cones,” in which attendees were able to “jump” into the lives of trees through a fast-paced, hands-on game. During the game, Zipse discussed traits of different trees and how they react to different stimuli, such as fire. Some trees produce pinecones that are serotinous, which means that they only open and release seeds when contacted with fire.

Christopher Lohbauer particularly liked this session; he has his own serotinous pinecone collection at home.

Bernard Isaacson, assistant regional forester at the NJFS, led a presentation on the ecology of forests and forest culture. He stressed the idea that our actions towards forests have serious consequences. 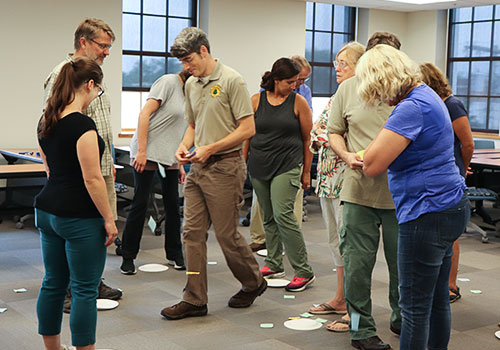 “What we’re trying to do here is communicate forestry concepts so people can make decisions and have a better understanding of science,” said Zipse.

Steven Yergeau, Rutgers University cooperative extension and environmental resource management agent of Ocean and Atlantic counties, dived deeper into the topic of water. His presentation, “Using Water Wisely,” began with an explanation of the hydrologic cycle, progressed to how urbanization disrupts this cycle, and ended with suggestions for water conservation practices that can be used in one's own yard.

The Lohbauers are already planning to attend.