Picture Stockton…Suiting Up for Science While the Surf’s Up

Atlantic City, N.J.-- On their way to the beach in front of Stockton University Atlantic City, waves from a 9-foot southeast swell rolled over a series of scientific instruments installed by Stockton’s Coastal Research Center (CRC).

These were the waves that Alex Ferencz, a student in the Professional Science Master’s in Environmental Science program, had been waiting for.

Ferencz, who is also a geospatial analyst and GIS program director at the CRC, has tracked coastal storms for years in pursuit of the perfect waves to ride on a surfboard, but this spring, he needed a storm that would give him data for his master’s thesis.

The instruments collected wave height, frequency and direction from 1,500 feet offshore all the way up to the dunes, and Ferencz is translating the numbers into a narrative that will tell how a storm can reshape a beach. His project will illustrate how the current moves sand on the seafloor and where exactly that sand ends up after the storm passes.

Wind-driven energy travels through the ocean as waves that eventually break when they reach shallow water, sending surges of seawater dune-ward. The shoreline is an ever-changing landscape.

Ferencz is analyzing data that will describe exactly how an extreme event from the southeast will impact the Atlantic City beach in front of Stockton's campus, from the dunes out into the nearshore waters.

Kimberly McKenna, principal investigator and director of sponsored programs at the CRC, secured funding from the New Jersey Sea Grant Consortium, an extension of a federal funding program, to make the project possible. This project marks the CRC’s first Sea Grant-funded initiative.

McKenna said, “We want students to look out the windows in Atlantic City and see the opportunity to do research on the beach.”

Eddie Waltz, a sophomore taking an independent study in coastal research, Matthew Deibert, an Environmental Science graduate and a geospatial analyst at the CRC, and Anna Pfeiffer-Herbert, assistant professor of Marine Science, also helped to prepare and deploy the instruments.

A concurrent experiment was conducted by the University of Delaware on a Delaware beach that has coarser sand grains and no sandbar. The results of that experiment combined with the Atlantic City findings will show how beaches with varying characteristics responded to the same storm.

View the photo story below by Susan Allen 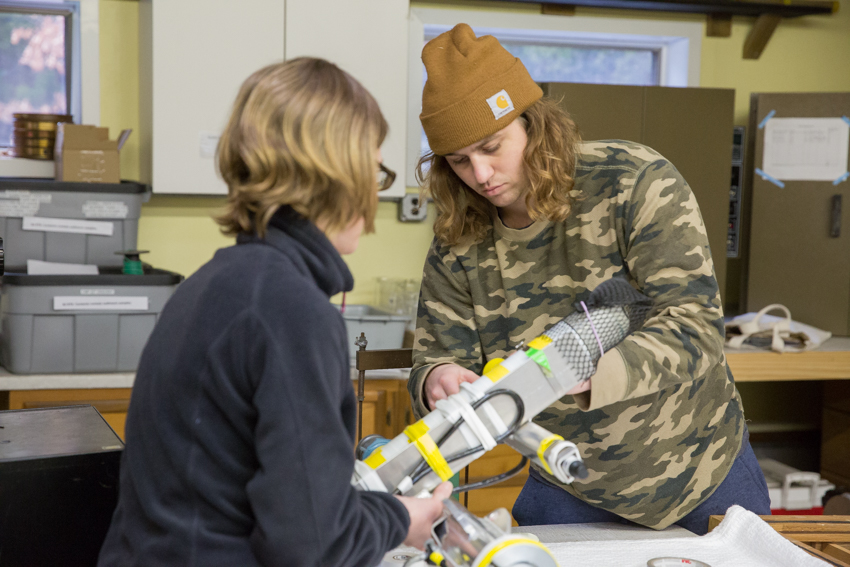 Anna Pfeiffer-Herbert, assistant professor of Marine Science, and sophomore Eddie Waltz, who is learning about marine instruments through an independent study, prepare an Acoustic Doppler Current Profiler (ADCP) to be deployed in the nearshore waters off Atlantic City. Waltz grew up in Sandy Hook just a walk away from the beach and enjoys surfing, fishing and boating. "I'm passionate about the ocean and want to get a head start on my major to figure out how I can get the most out of my major," he explained. 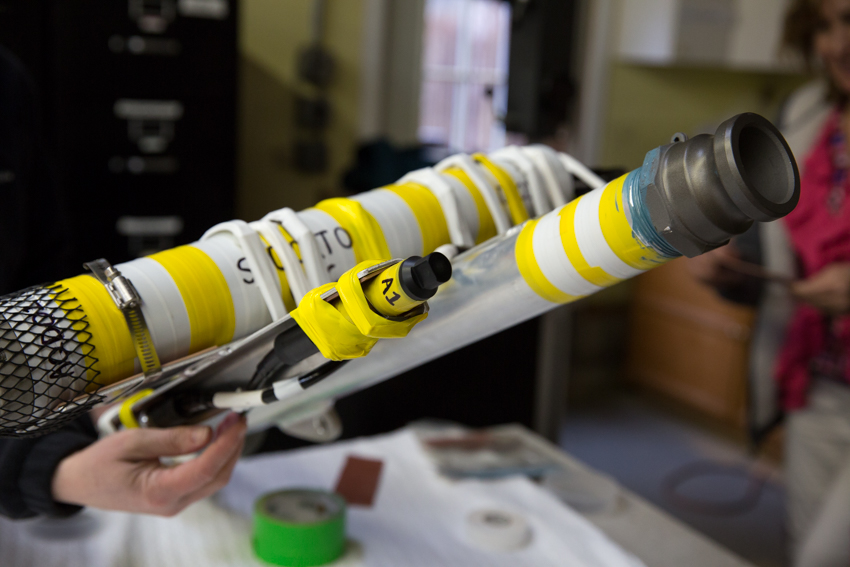 The ADCP instrument emits sound in the water column to collect wave height, frequency and direction. An optical backscatter instrument (A1) shoots out a laser beam that collides with the fine particles of suspended sediment. 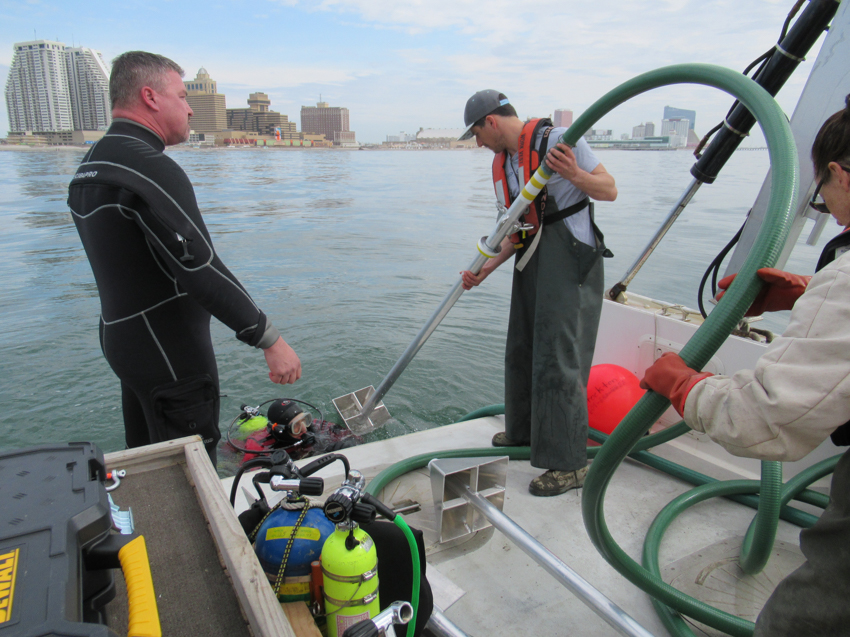 Steve Evert, associate director of Stockton's Marine Field Station, and scientific divers worked from the R/V Petrel to deploy the ADCP instruments in the nearshore waters. Pictured, Alex Ferencz lowers an anchoring device to a diver. The attached hose aids in burying the anchor into the sand. Photo: Kimberly McKenna 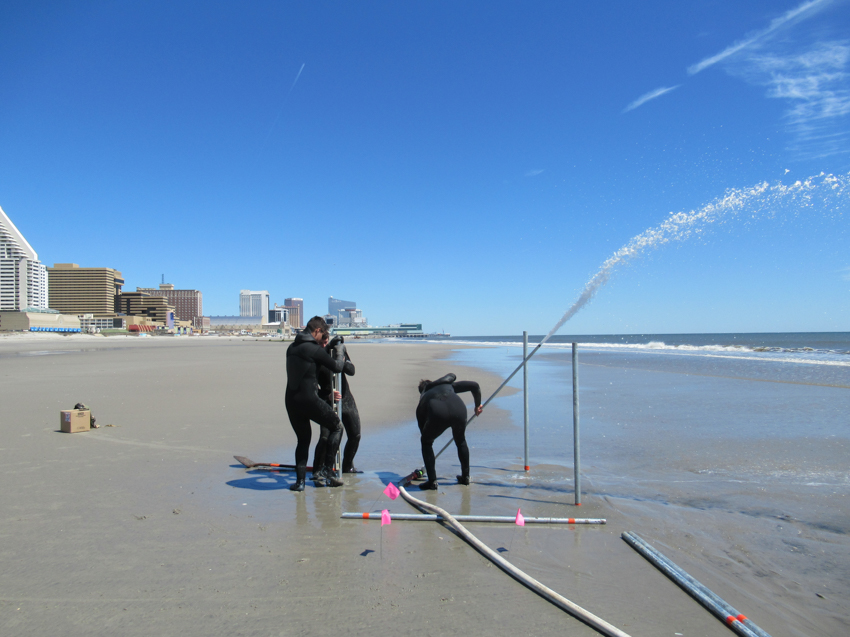 At low tide, the team installs the scaffolding structure that will hold a current meter in place. The blowout wind conditions around the approaching full moon offered a lower than usual tide. Photo: Kimberly McKenna 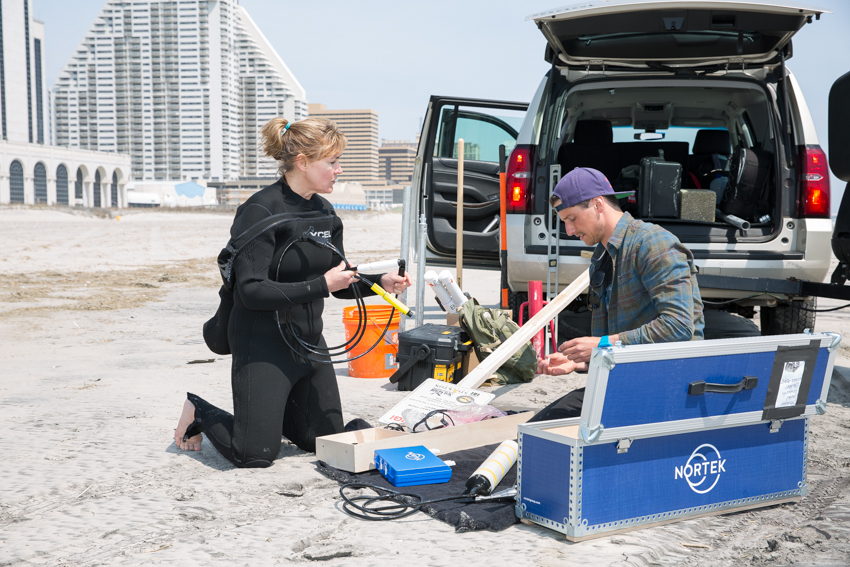 Kimberly McKenna, principal investigator and director of sponsored programs at the CRC, and Alex Ferencz, a PSM student who is also a geospatial analyst and GIS program director at the CRC, unpack the current meter. Before collecting his own data for his thesis, Ferencz worked with offshore current data from NOAA to compare how northern and southern New Jersey beaches react to storms. 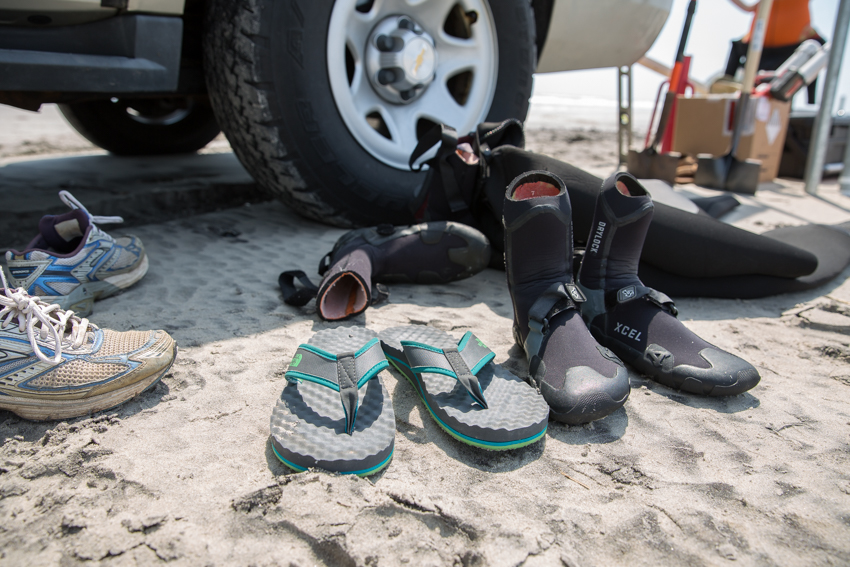 With the ocean water temperature hovering around 50 degrees, the team changes into wetsuits and booties before wading into the surf zone. 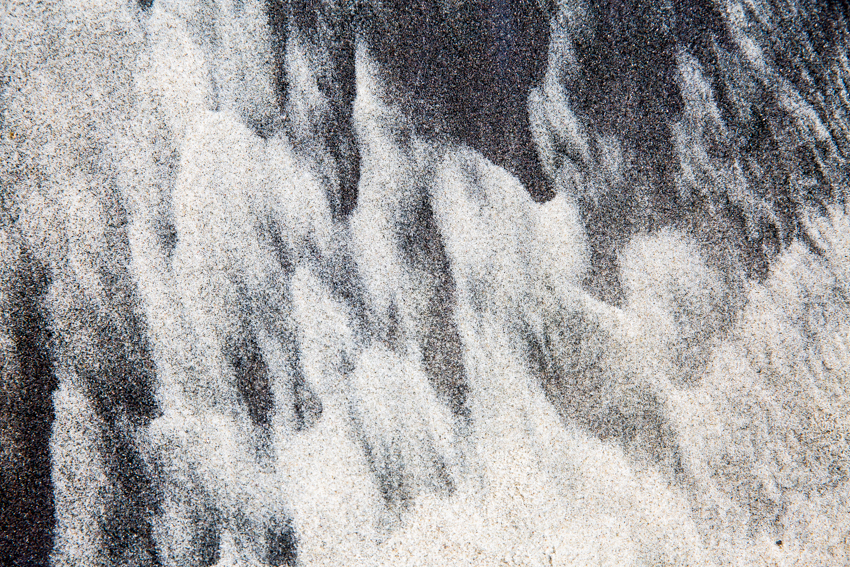 Kimberly McKenna points down to the black sand, explaining that it is rich in heavy minerals. "The heavy minerals were initially derived from erosion of the Appalachian mountains that were carried to the ocean during the last glacial period. They were deposited in the New Jersey coastal plain during the last high sea stand and made their way to the current beaches by way of waves that erode the offshore portions of those deposits," explained McKenna. 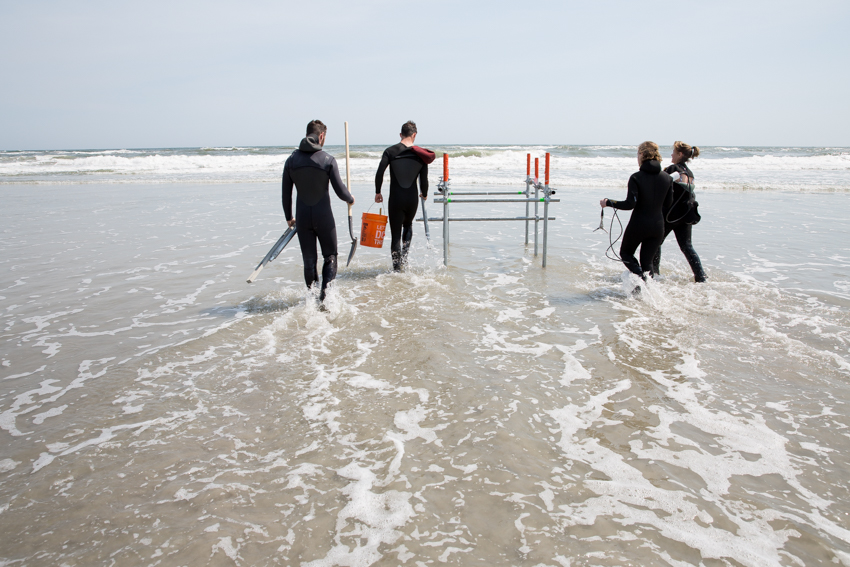 The team brings the current meter to the scaffolding cage for installation a couple days before the storm sends bigger waves to the beach. 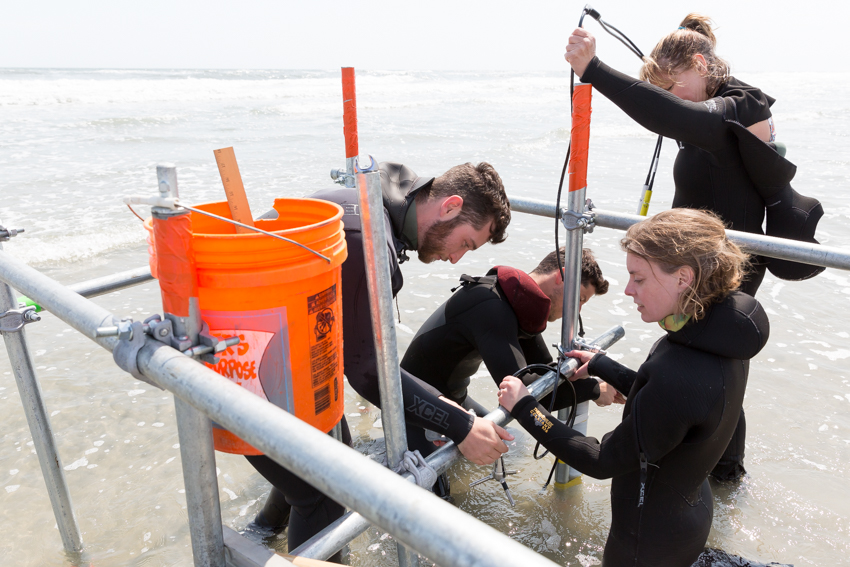 Rippled patterns in the sand are formed by moving currents. The current meter will measure the changes on the seafloor as current transports sand. 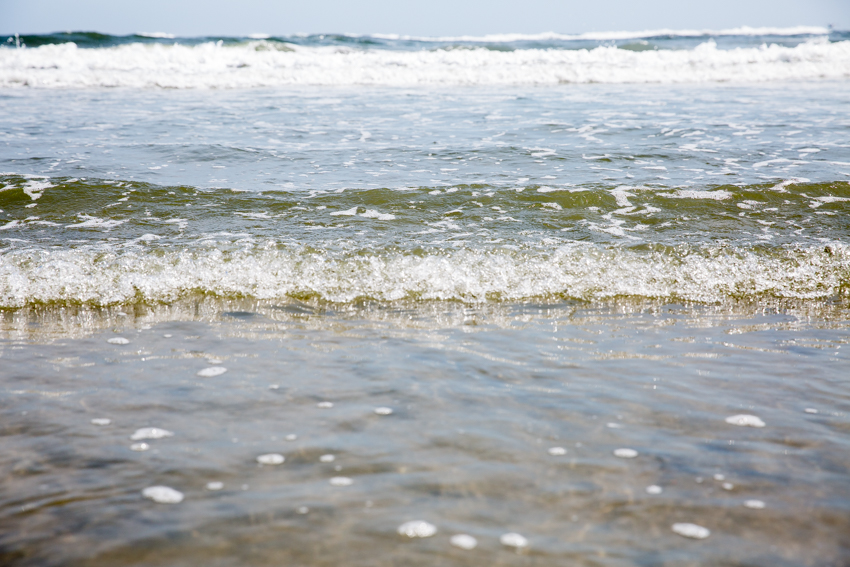