Horseshoe crabs crawl out of the Delaware Bay at high tide to spawn at Kimble's Beach. They will bury tiny blue-green eggs in sand placed on the beach by Stockton's Coastal Research Center.

Migratory shorebirds en route to their Arctic breeding grounds make a pit stop on the Delaware Bay to refuel on eggs laid by spawning horseshoe crabs. From the sea and the sky, these species meet on South Jersey’s sandy bay shores.

Horseshoe crabs are arthropods (not true crabs) that pre-date dinosaurs. Fossil evidence dates their existence as far back as 450 million years ago. Red knots and other shorebirds sync their migratory stopover with the horseshoe crab spawn to double their weight on eggs.

Birds aren't the only species that depend on horseshoe crabs. They are also in demand by humans for bait and for their blue blood that has a clotting agent used in the biomedical industry to test for bacterial contamination in drugs and prosthetic devices.

Sand replenishment and oyster reef projects are helping to sustain the sand that is critical to the survival of both species.

Sandy stripped the thin sand layer that covers the saltmarsh, exposing organic mass and peat below, explained Steven Hafner, assistant director of the CRC, who coordinates the habitat restoration work with the American Littoral Society, U.S. Fish and Wildlife Service and biologist Larry Niles, of LJ Niles and Associates.

Decomposing organic matter releases gases that are toxic to the development of crab eggs.

The absence of sand could be a death sentence to the crabs as well as the shorebirds that bulk up on their eggs.

In 2013, the stretch of shoreline from Reeds Beach to Pierce’s Point in Cape May County, which is prime foraging habitat for migratory shorebirds, was replenished just in time for the crabs’ and birds’ return post-Sandy. Sand nourishment projects typically last for 3-4 years, depending on storm frequency and intensity, explained Hafner.

This year, the CRC is developing a plan to transport sand to the nearby but less accessible Bay Cove beaches with a tracked dump truck. At the end of the summer, three reefs will be built off of Cook’s Beach, which received new sand in April.

There is a science to the sand placement. The crabs have preferences when it comes to beach slope and width as well as sand grain size.

“A beach with a steeper slope is easier for crabs to enter and exit the water. On a wide flat beach, crabs get pushed up at high tide and have a greater chance of getting disoriented,” Hafner explained.

With no decline leading them back into the water, crabs can get confused. Their meandering tracks often decorate a flat beach at low tide. Those that get lost, hunker down into the sand and wait for the tide to rise. The less fortunate that get flipped upside down are in danger of drying out and becoming a meal for gulls.

Beach width, defined as the length from the dune to the mean high water line, needs to be wide enough to accommodate the mass of crabs that arrive together on full and new moon high tides. “More crabs means that they are more likely to overturn the eggs of crabs that spawned before them. This disturbance known as bioturbation is bad for the crabs, but helps the birds [because the eggs are brought to the surface],” Hafner said.

“Horseshoe crabs have to have a wide enough beach to deposit a density of eggs that will ensure their own survival and feed foraging birds,” he added.

The best sand has a medium-course grain size to allow enough oxygenation during the tidal cycles and to support the right amount of beach slope. Fine sand grains could suffocate eggs.

Stockton’s partners and biologists work with volunteers to tag horseshoe crabs and band shorebirds to learn more about their movement, survival rates and behaviors. The CRC will continue long-term monitoring of the beaches’ physical changes to help inform future beach designs that will help two species that depend on sandy beaches for their survival.

The success of a living shoreline is evident this season with horseshoe crabs spawning and flocks of shorebirds feasting on the very beaches that were designed and constructed by the Coastal Research Center. 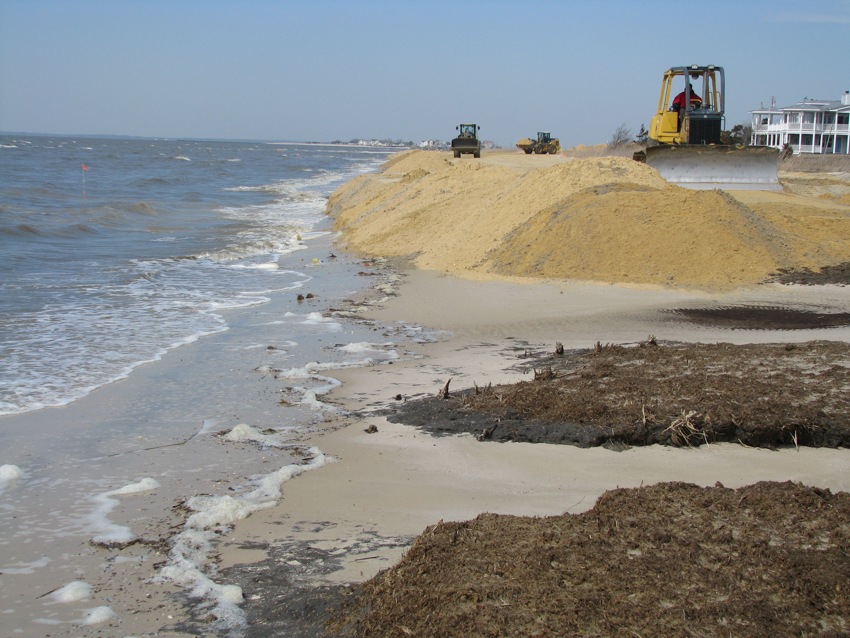 The Coastal Research Center designed a restoration project to cover saltmarsh exposed by Hurricane Sandy with sand needed by horseshoe crabs for spawning at Kimble's Beach. Sand must be thick enough to buffer buried eggs from the toxic gases that are released by the organic marsh material below. 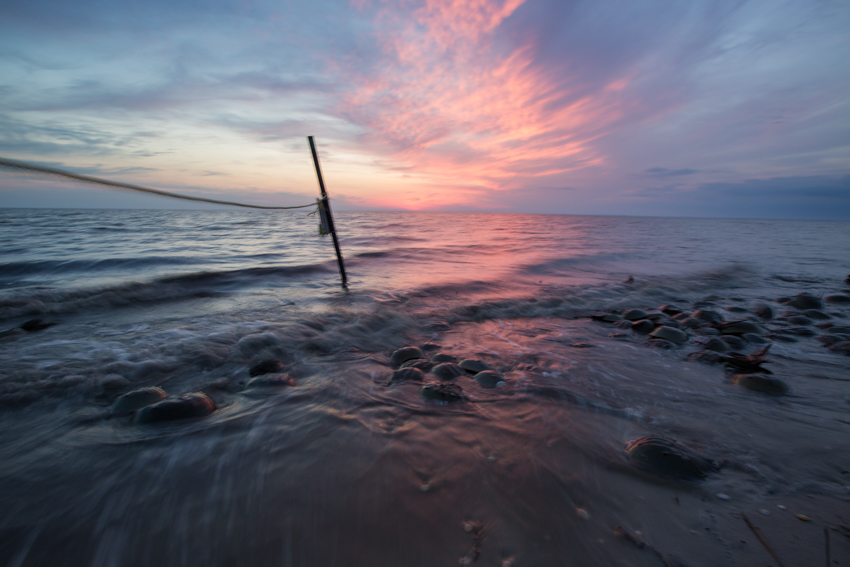 This May, spawning crabs at Kimble's Beach illustrate the success of the habitat restoration project. Crabs still face threats from overharvest for bait and their blood. 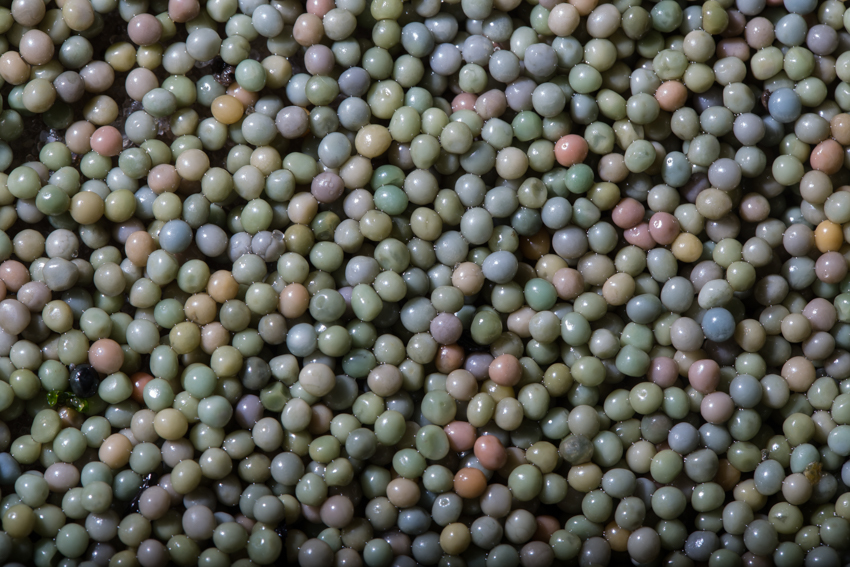 At the end of the 2018 spawning season, a mass of multicolored horseshoe crab eggs washed ashore at Fortescue Beach. Daniel Hernandez, associate professor of Biology, explains, "Shoreline discontinuities like jetties usually collect the greatest amount of eggs. The variation in egg color is due to a few factors. Natural variation in the colors and age of the egg in the environment--'older' eggs--will take on various colors as they age due to the various bacteria that colonize the egg. Adult crabs vary in color too." 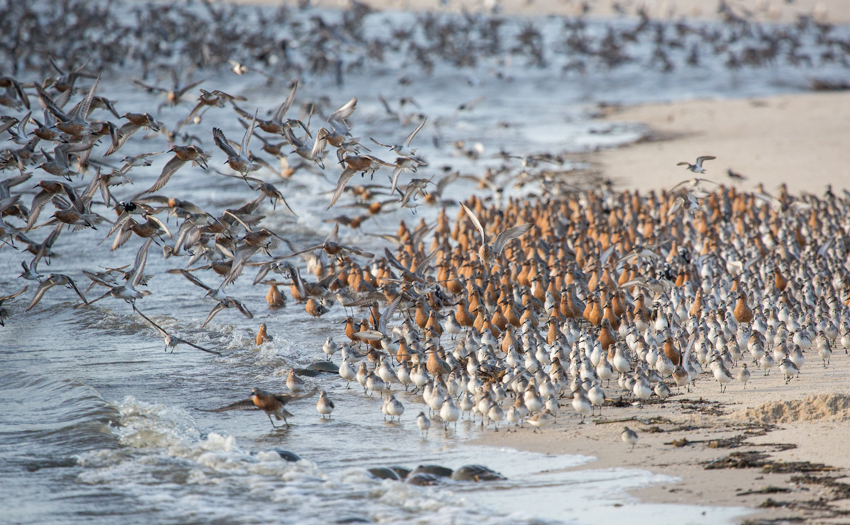 Red knots and other shorebirds forage the shoreline for eggs exposed by disturbances such as the tide and crabs. Threatened and endangered shorebird species are banded by biologists led by Larry Niles. Re-sightings by citizen scientists contribute valuable data points to the broader story of shorebird migration and survival. One red knot, banded with the code B95, traveled the distance to the moon and about halfway back during its lifetime, earning the nickname Moonbird.

After Sandy, a community living along Moore's Beach in Cumberland County abandoned their homes. Rubble, which can trap crabs, was removed by the U.S. Fish and Wildlife Service, and then the CRC designed a beach restoration project. 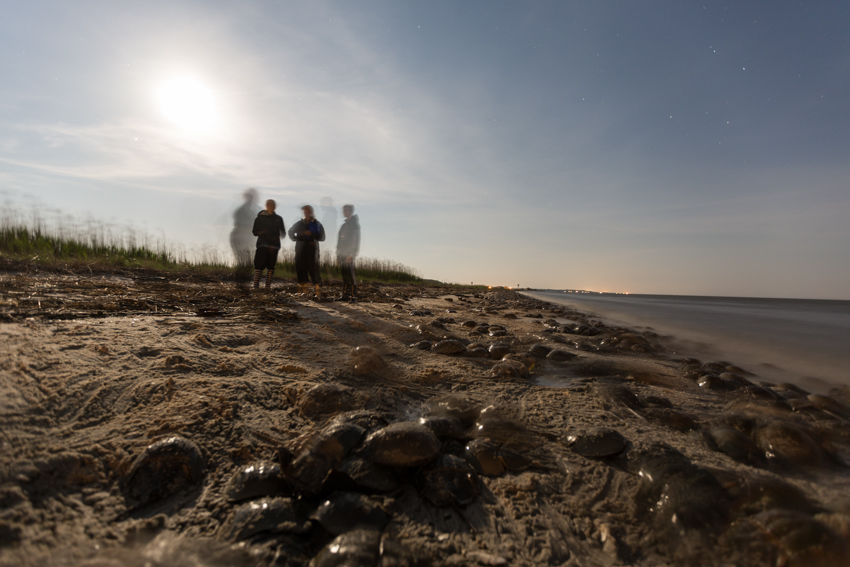 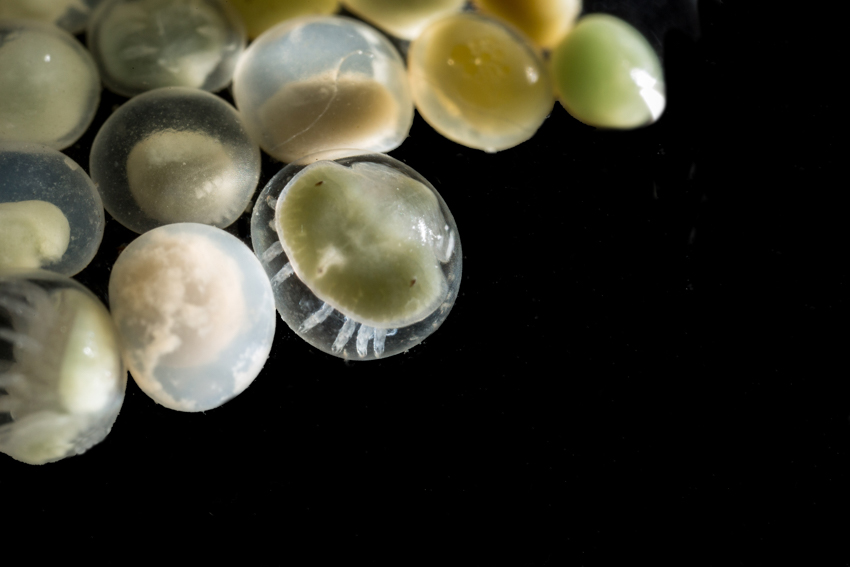 Horseshoe crab eggs can hatch as quickly as 14 days under optimum temperature and egg density conditions. Just before hatching, the embryo can be seen somersaulting in the translucent egg case. 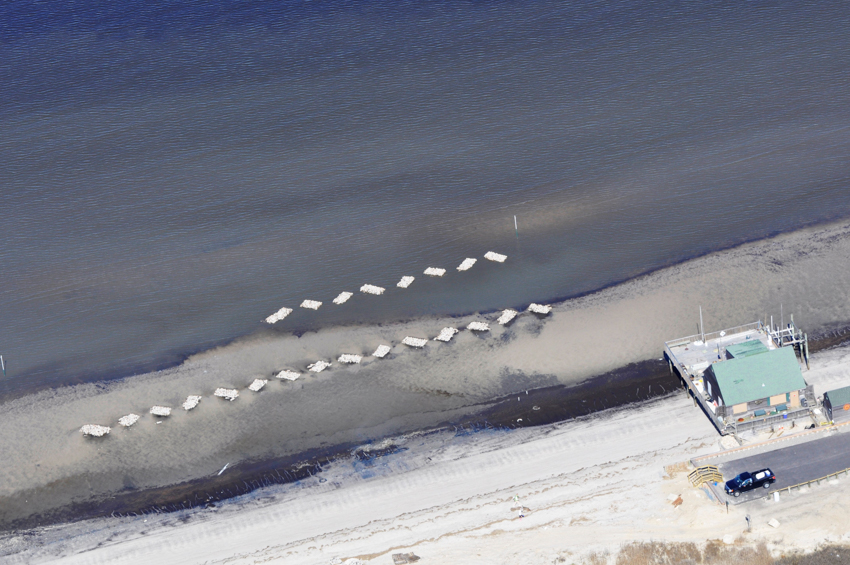 An aerial view of the Reeds Beach oyster reef shows the herringbone pattern with gaps that serves to funnel incoming crabs to the beach. A research project installed fencing along the sides of the reef to compare how many crabs accessed the beach through the reef and from outside the reef. The study found that the crabs were able to pass through without casualties. Photo: Ted Williams 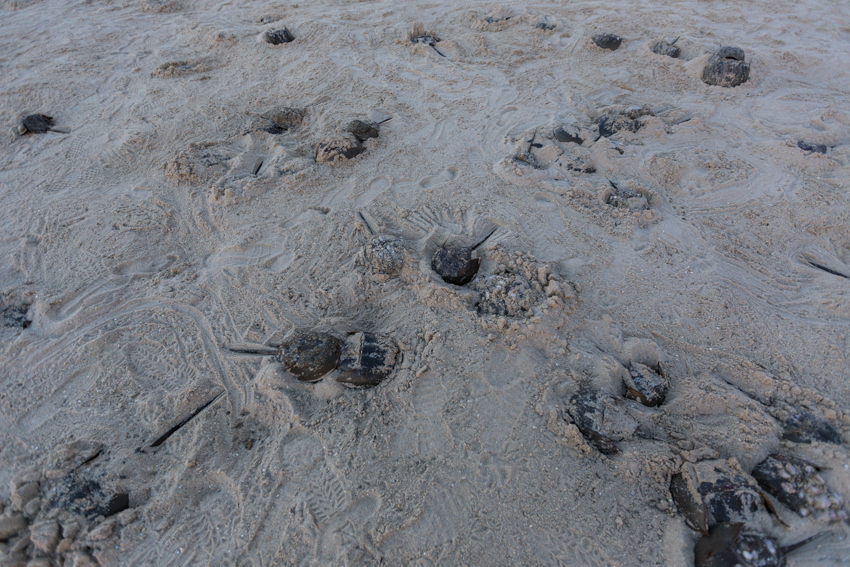 Horseshoe crabs seek shelter in the sand at low tide. Only tracks remain from the crabs that already returned to the bay. 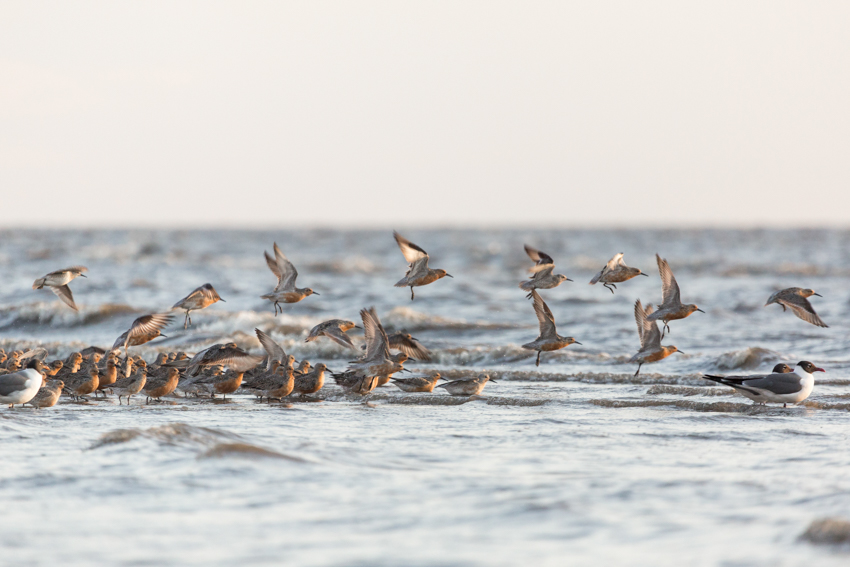 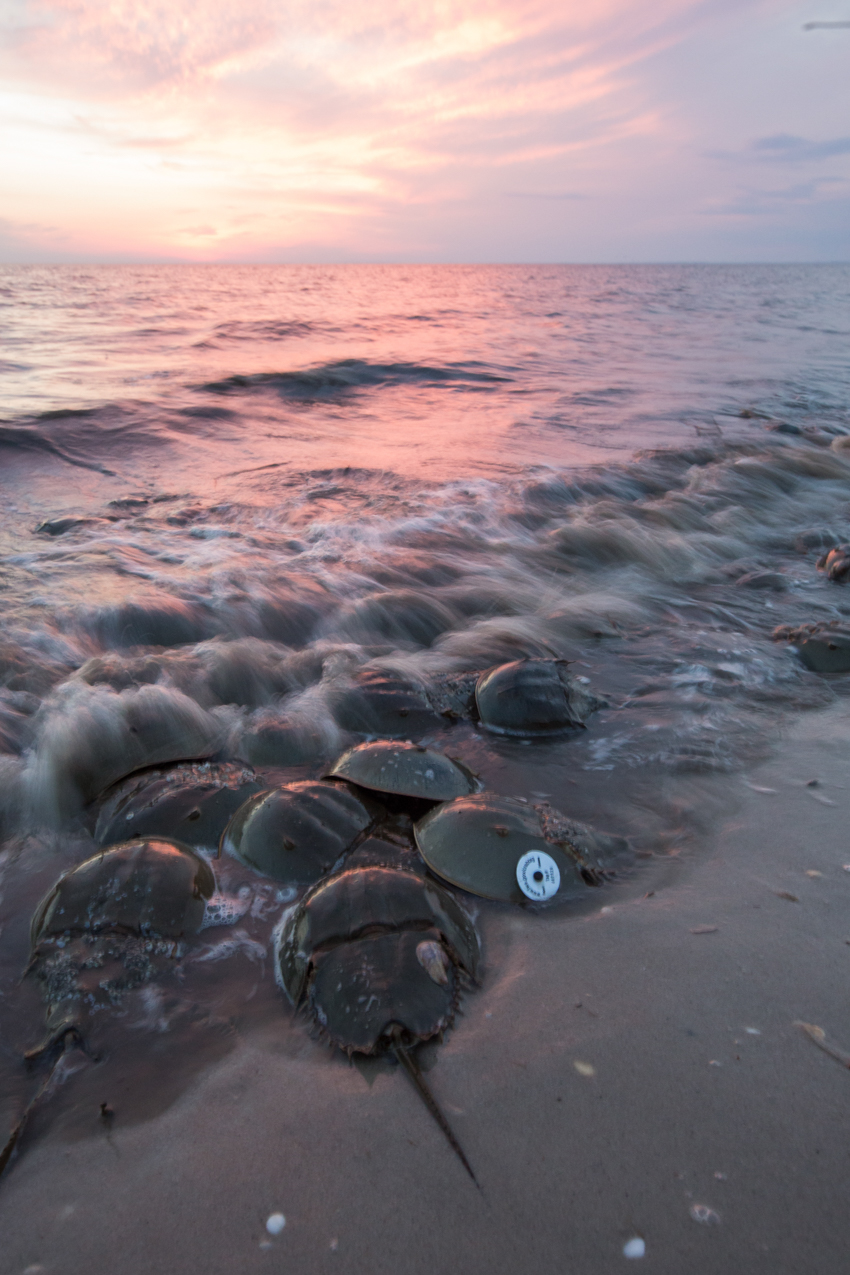 The white disc is a tag with a unique code that can be reported to the website or phone number printed on the tag along with the crab's condition, location and the date of the sighting. Biologists need the help of citizen scientists to gather re-sighting data that draws an overall picture of crab movement and helps determine survivorship and other behavioral patterns such as site fidelity and spawning frequency. 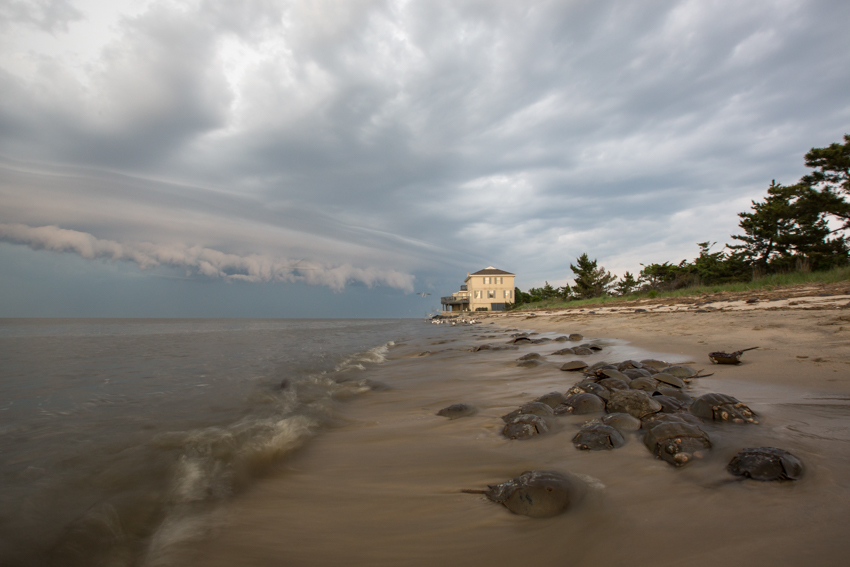 To observe the natural wonder that replays annually along the Delaware Bay, head to the beach in late May and early June at high tide on full and new moons. Look for tags on horseshoe crabs and bands on shorebirds to help fill in missing gaps of the story.