In December 2018, the ocean uncovered hidden history. What remains of an old wooden ship is now visibly resting on the beach at Stone Harbor Point.

Last month, the ocean uncovered hidden history. What remains of an old wooden ship is now visibly resting on the beach at Stone Harbor Point in the intertidal zone. As the ocean recedes, sturdy oak timbers forming the ship’s ribs jut out from the sand until they are covered again by the high tide.

This rare glimpse at a piece of the past has drawn hundreds of curious beach-goers during the off-season. One of the visitors was marine archaeologist Stephen Nagiewicz who teaches underwater science and exploration at Stockton University.

We asked Stephen Nagiewicz to describe what he observed and to share the scientific detective work that goes into telling a ship’s story long after its days working on the water.

There are an estimated 4,000-8,000 shipwrecks resting along the New Jersey coast, and there could be as many as 60 at Hereford Inlet between Wildwood and Stone Harbor, he explained.

An attempt to confirm the wreck’s identity would require an archaeological group to claim ownership of the remains and take them apart to study the intricacies of the frame work and unique structural design. “It could be a jolly boat from a sailing ship, a whaling boat, a lifeboat from one of the nearby lifesaving stations or a piece of a much larger vessel like the D.H. Ingraham,” he said.

Whaling was once prevalent along the Jersey coast. “The wreck’s sturdy construction and size (what remains is about 25-30 feet long) would have made it possible to bring in a whale,” he explained.

The solid build of the remains makes it less likely a row boat for lifesaving, since it would be more difficult to push off the shoreline in a rescue situation, he explained.

The D. H. Ingraham, a schooner headed to Richmond, Va. from Rockland, Me. carrying the mineral lime, ran aground 132 years ago in a snowy nor’easter near the site where the unidentified wreck lies. The Ingraham also caught fire, which could have been caused by the cargo of lime, which can ignite in flames when wet.

Obvious evidence of burning wasn’t detected by Nagiewicz during his short examination of the wreck, but it’s possible the charred pieces have disappeared with other parts of the wreck over time. Although the wreck isn’t proven to be the D.H. Ingraham, Nagiewicz said, “I hope that it’s true because it could bring great closure to a historical and courageous lifesaving story.”

The Anglesea Lifesaving Station sent out a team in the dark knowing the endangered Ingraham crew’s chances of survival overnight were slim, and all five were rescued.

The wreck’s possible white oak timbers suggest that it was built in New England or Canada whereas red cedar construction might indicate an origin of New Jersey, Virginia or south to the Carolinas.

The wood and iron pegs used in construction help to narrow down the potential age. Iron pegs make it younger than a ship with bronze pegs, and the wood pegs were used during the late 18th and early 19th centuries as a less expensive option to metal pegs.

Additionally, “there was some evidence of copper sheathing which was used to protect the ship’s hull from damage from wood-boring animals and worms that eat the cellulose in the wood,” he added.

The wood can be dated by analyzing a core sample drilled from a piece of the remains with at least 70 rings of seasonal growth. Counting the rings reveals the age of the wood.

Nagiewicz noted the excitement surrounding the shipwreck as families and visitors hiked to the end of Stone Harbor and photographers sought out creative angles to document history. The scene reminded him of an artist’s sketch of the Dora Baker washed up in Long Branch, N.J. that was published in the Newport News in the late 19th Century.

“People are fascinated when a piece of history underneath the beach becomes visible. They feel a sense of history even if they don’t know the whole story. They know it’s old, important and interesting,” he said.

While the wreck is exposed, it risks being damaged by waves as they crash over the remains and being taken away in parts as souvenirs.

Only time will tell how long the shipwreck will stay visible, but Nagiewicz notes it could be covered up again as soon as the next storm.

Note: Stockton University’s Marine Field Station, located in Port Republic on Nacote Creek, supports student and faculty research to document local shipwrecks. In 2014, Stockton digitally mapped the Robert J. Walker, a U.S. Coast Survey steamer that sank just before the Civil War began, with sonar technology. Currently, Nagiewicz and his students are using sonar to map Revolutionary War shipwrecks in the Mullica River, tied to the Battle of Chestnut Neck, and nominating them to the National Parks Register of Historic Places. 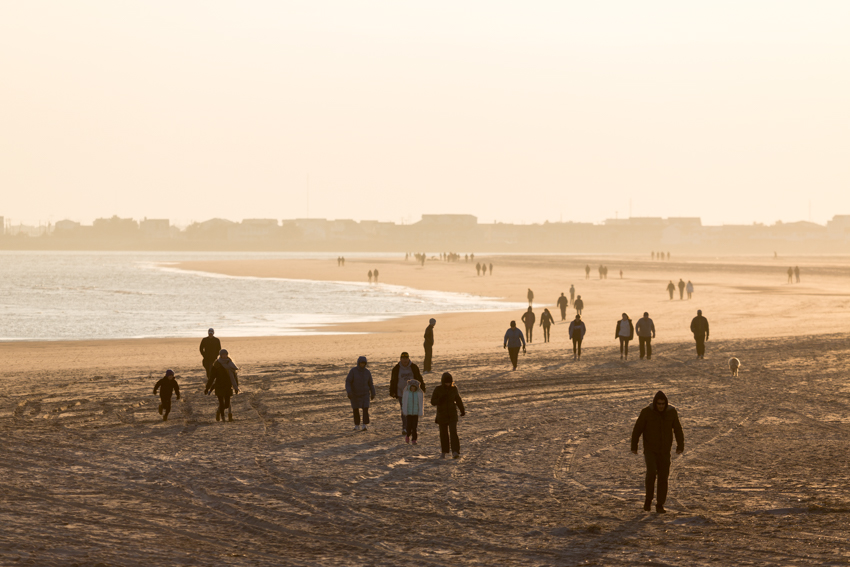 Dozens of curious beach-goers make the hike to the end of Stone Harbor Point to see the recently revealed shipwreck before it's covered up again. 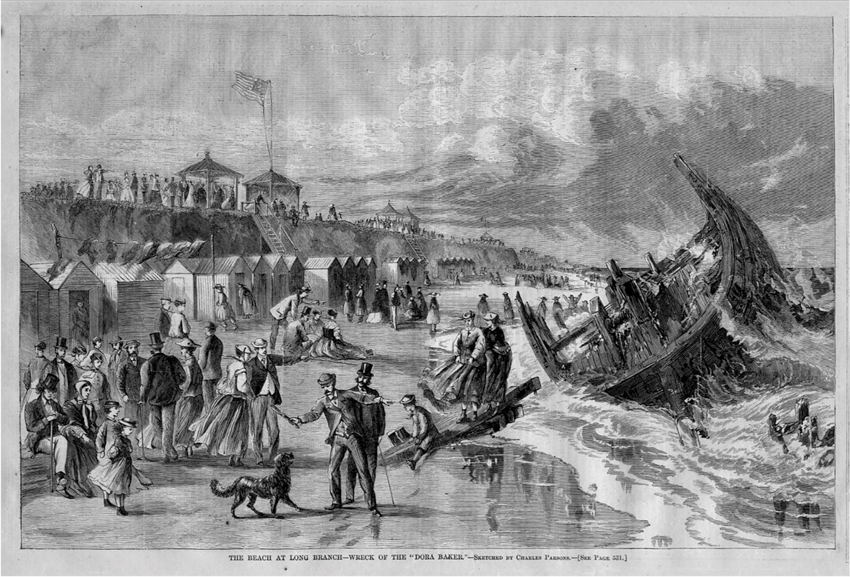 This artist's sketch of the Dora Baker washed up in Long Branch, N.J. in the late 19th Century shows that shipwrecks have historically attracted visitors. Image credit: Mariners’ Museum 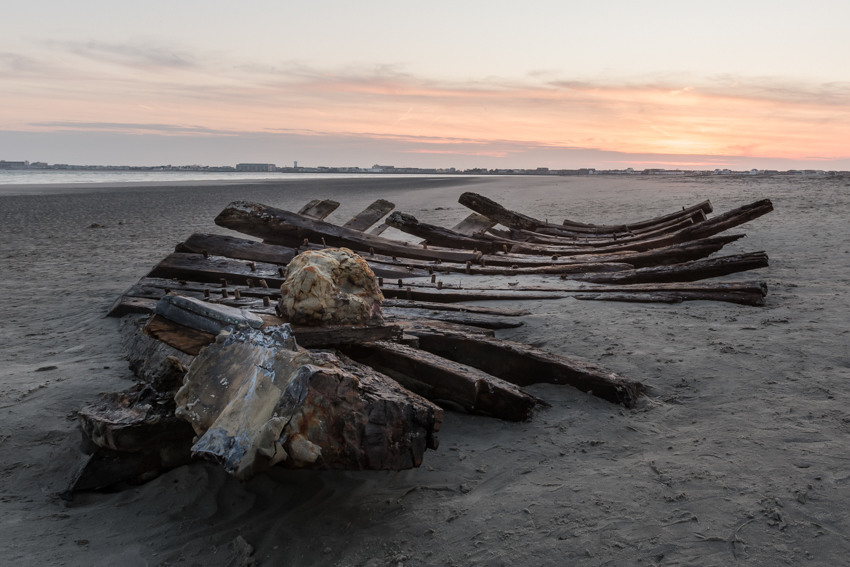 The copper sheathing used to protect the ship’s hull from wood-boring animals and worms is visible in the front of the image. 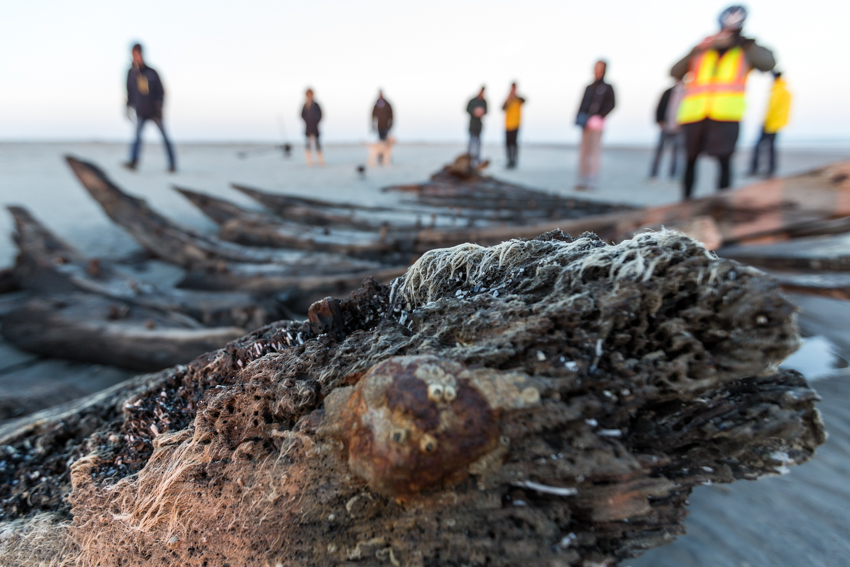 Barnacles and marine life cling to the wreck as observers take in history and document the scene with their cameras. 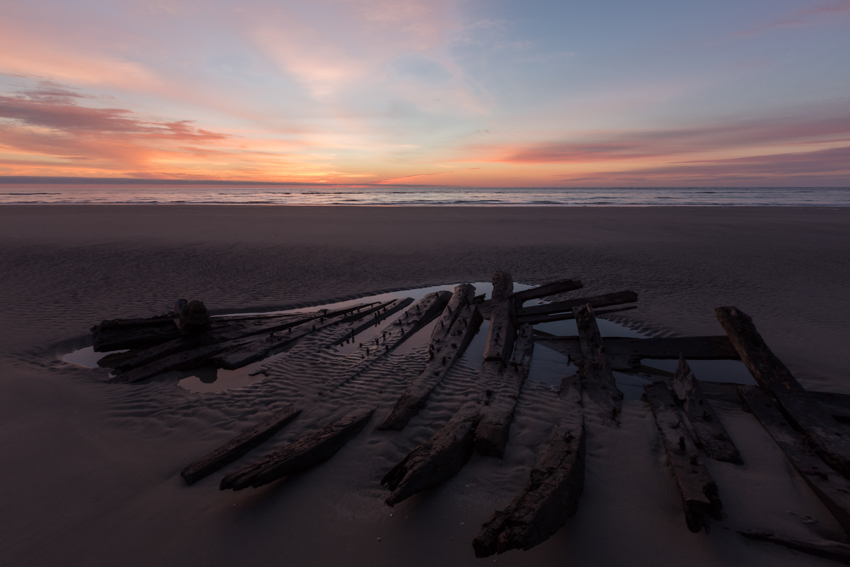 The wreck rests in a puddle at low tide. 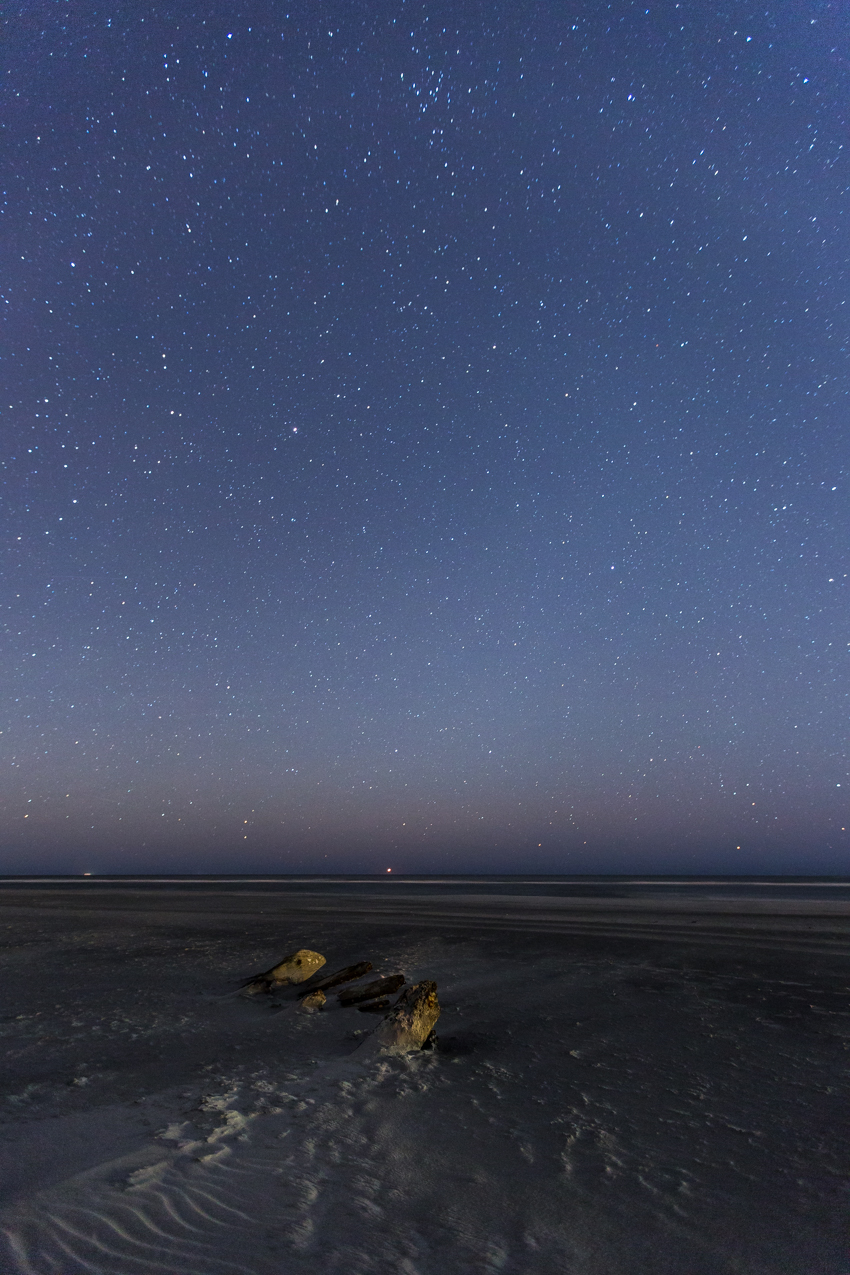