When a female Diamondback terrapin gets struck by a car, there is still hope for her eggs.

This season, The Wetlands Institute in Stone Harbor rescued 884 eggs from 763 female terrapins that were hit by cars before they could dig nests to lay their eggs. This winter, 401 of the hatchlings will be raised by John Rokita, assistant supervisor of Academic Lab Services, in Stockton's new and more spacious vivarium, a facility for raising animals, which moved from F-Wing to the Unified Science Center II.

The terrapin conservation project, a joint effort between Stockton and The Wetlands, extracts eggs from terrapin carcasses for incubation. The hatchlings then enroll in a head start program at Stockton, where they grow strong over the winter months, for release the following season. A head-started terrapin is 2-3 times larger than a wild terrapin of the same age.

Community members deliver injured terrapins and hatchlings rescued from storm drains to both The Wetlands and John Rokita for rehabilitation and special care. Every year, dozens are rescued by Tim Glenn III, a Stockton Foundation Board member and president of Glenn Insurance Inc.

Glenn Insurance is located next to a saltmarsh, so many of Glenn's rescues come from that property. This fall, Glenn joined John Rokita, Lester Block, of the School of Natural Science and Mathematics, and Melissa Laurino, animal care specialist, to release the terrapins he rescued the previous season that were ready to re-enter the wild.

The release took place in the saltmarsh behind Veterans Memorial Park at Glenn by the Bay in Absecon, a place Tim Glenn once called home. His appreciation for nature that inspires his conservation efforts began right there. When his parents moved, they donated the property to Green Acres, and it is now a terrapin safe haven.

See Stockton's new vivarium space and follow the terrapins as they re-enter the wild in the photo story below. 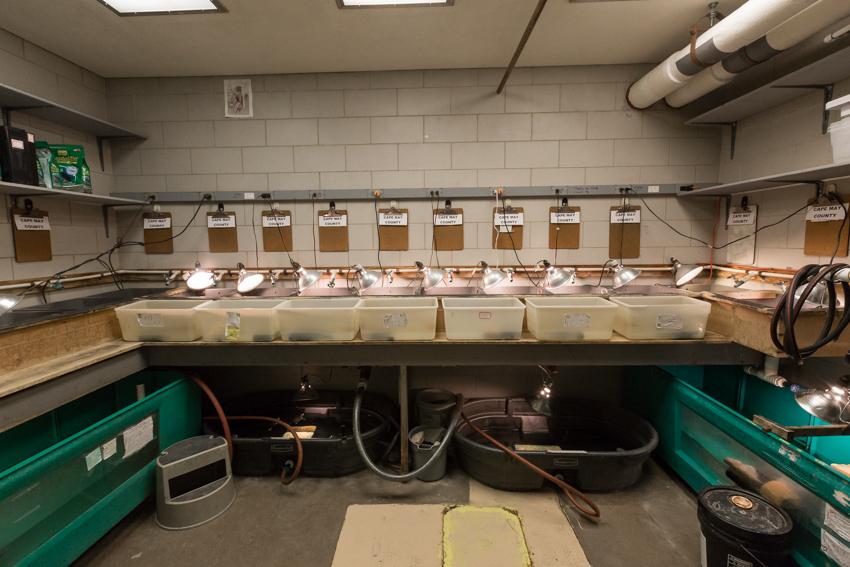 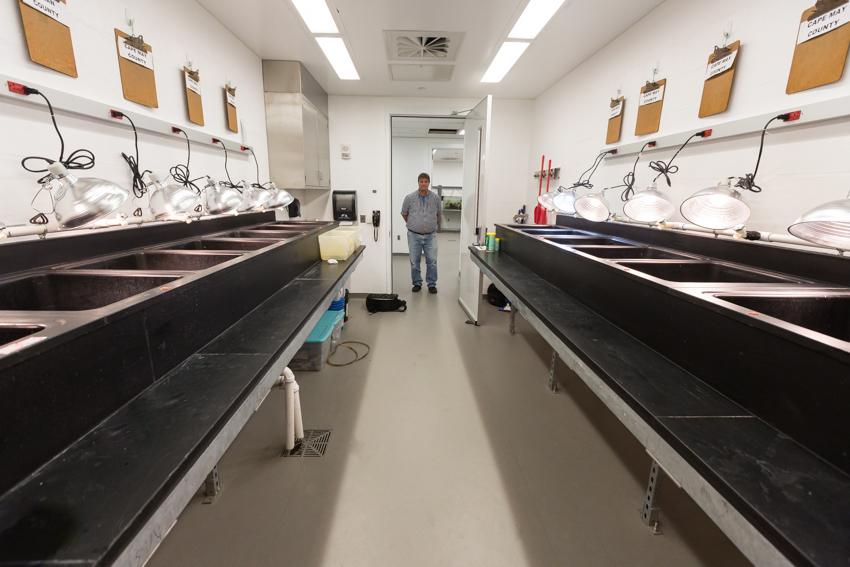 The new terrapin room in the vivarium, located in USC II. 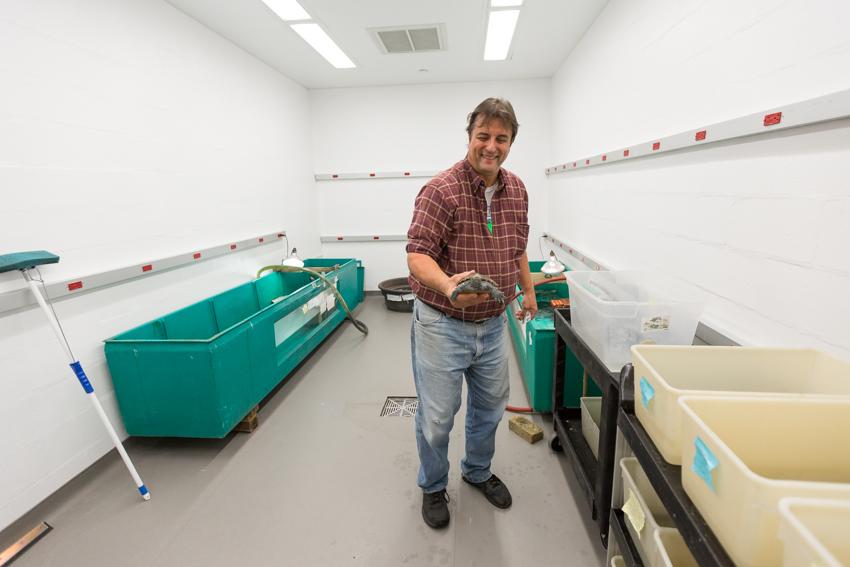 John Rokita holds a terrapin healing from a shell injury in a second terrapin room for rehabilitating adults in the new vivarium.

The terrapin conservation project began in Roger Wood's attic three decades ago. Wood, former director of research at The Wetlands and retired professor of Zoology at Stockton, needed a more controlled environment to raise the terrapins, so his project moved to Stockton. Initially, the terrapins were reared in 10-gallon tanks that filled John Rokita's office until a laboratory space was designed for the project in F-Wing. Now, the terrapins live in the Unified Science Center II. Pictured is the former terrapin room in F-Wing and its new location in the vivarium. 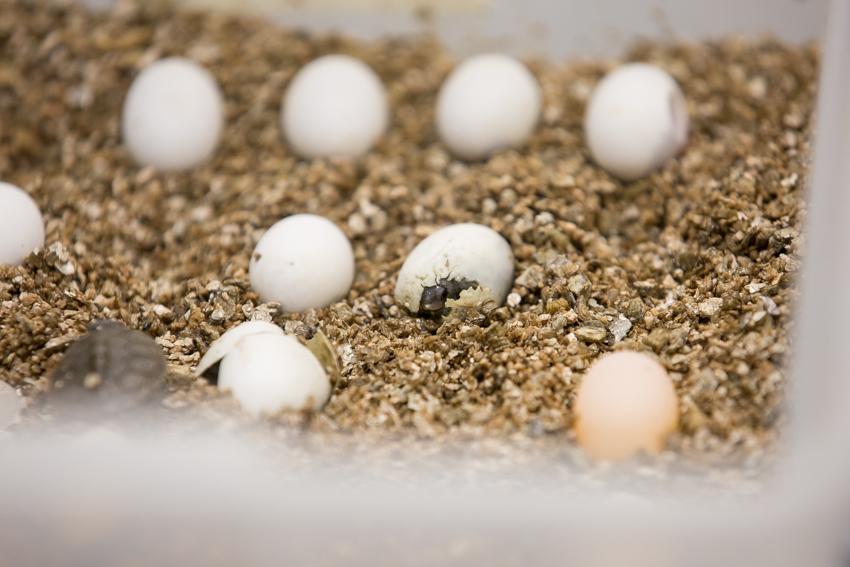 A terrapin breaking through its shell. 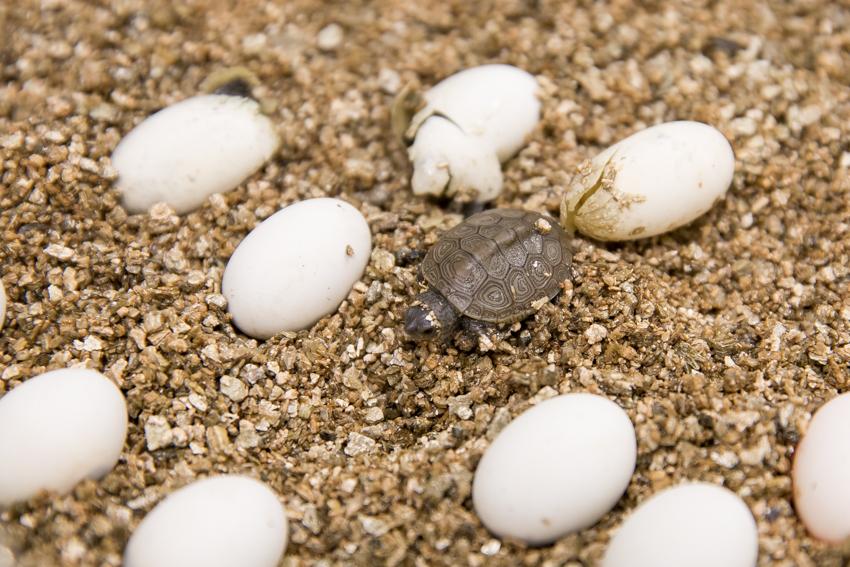 This terrapin isn't in a hurry to hatch. It can take days for a terrapin to fully emerge. An egg tooth helps them make the initial breakthrough from inside the shell. Eggs, removed from their road-killed mothers in an eggectomy surgery, are incubated at both the Wetlands and Stockton. 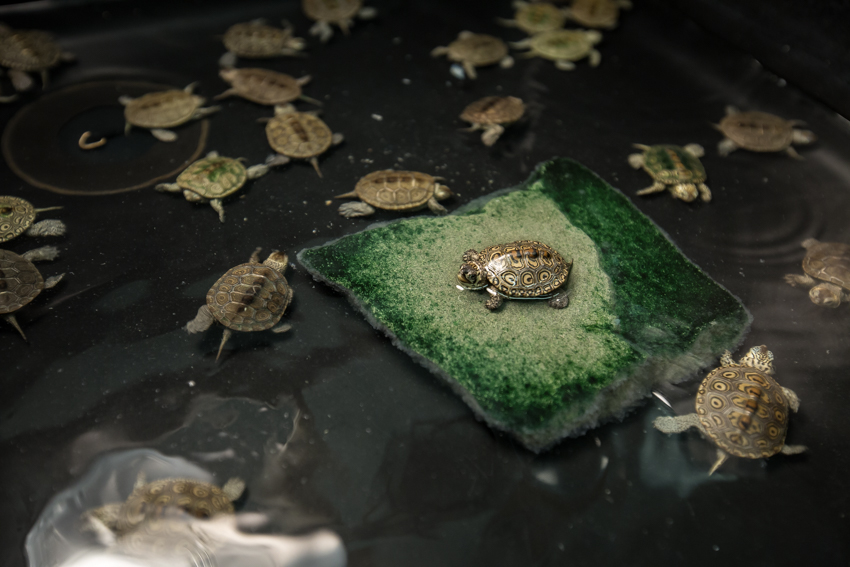 This season's hatchling terrapins have entered the head start program. In the wild, they would hibernate in the saltmarsh, but in the heated vivarium where they are fed all winter, they will grow strong. 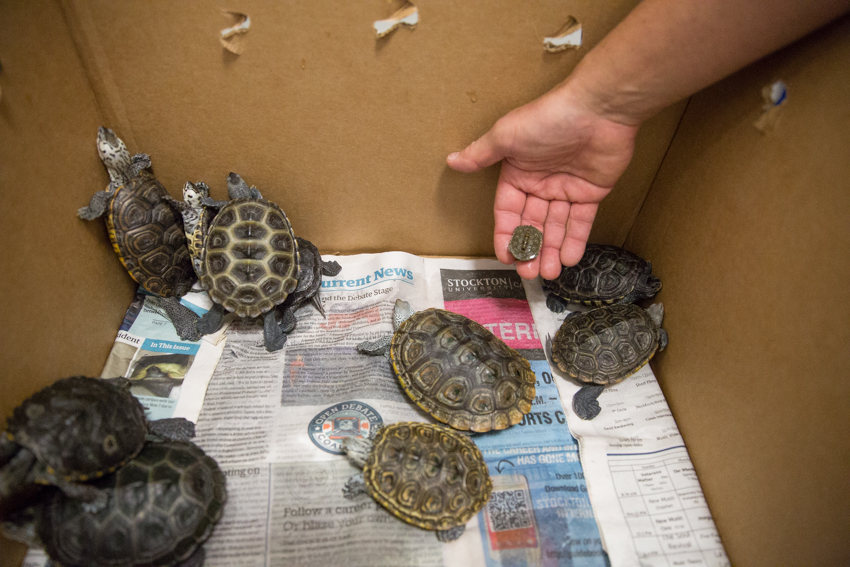 The majority of terrapins are ready to graduate from Stockton's head start program after a year. On move-out day, transportation boxes are ventilated with air holes. John Rokita holds a hatchling from this year next to the ready-for-release terrapins that are about a year old to illustrate the growth. 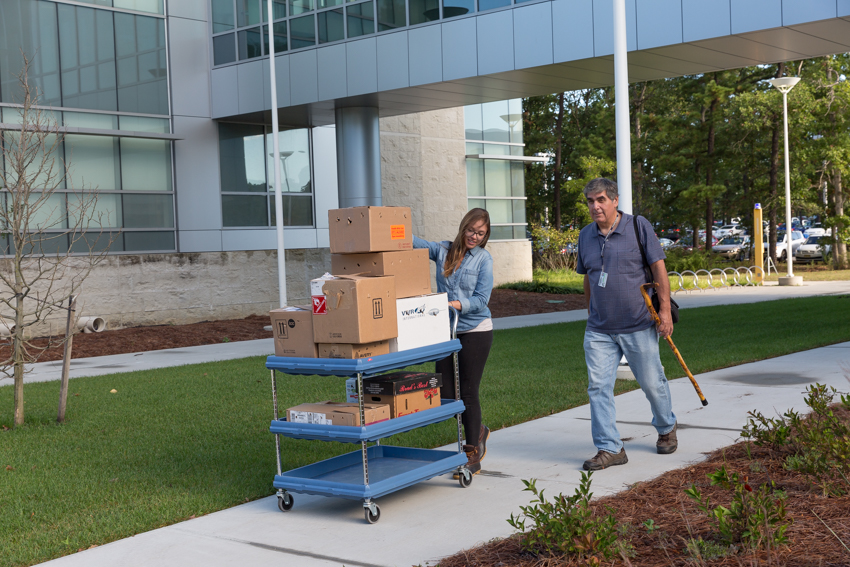 Melissa Laurino and Lester Block cart the terrapins out of the Unified Science Center II for their ride to the saltmarsh. 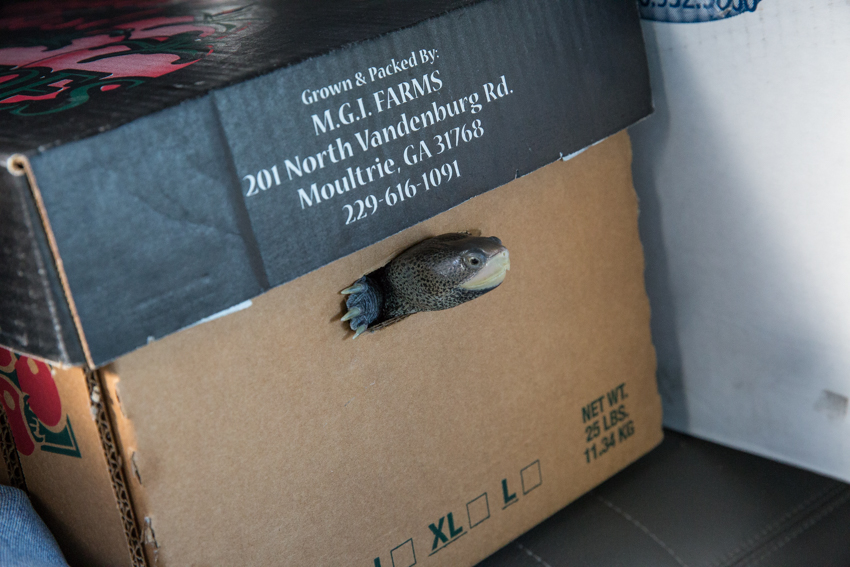 During the van ride, a curious passenger peeks out an air hole. Sounds of claws scratching cardboard came from anxious-to-be-free terrapins. 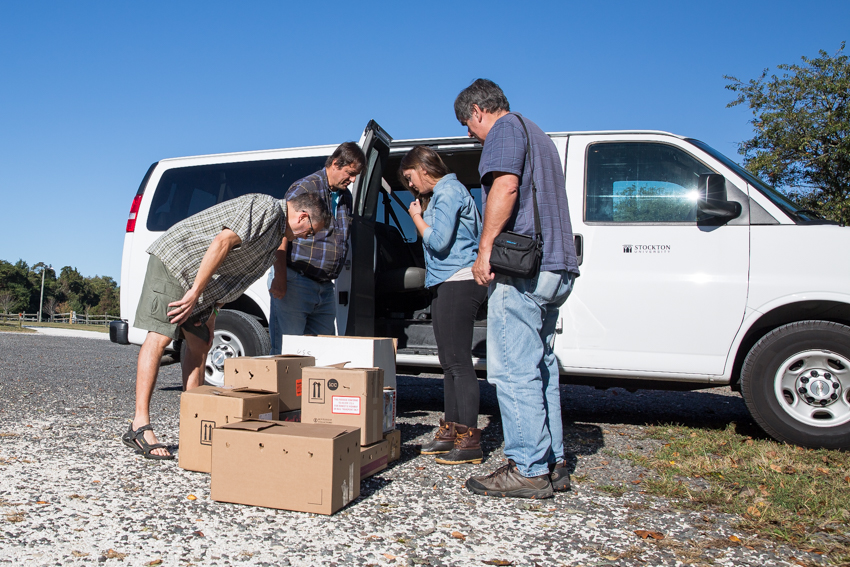 Just over two dozen terrapins from Atlantic County are unloaded for a walk to the saltmarsh. A second terrapin release took place a couple weeks later. That second group of terrapins came to Stockton in 2017 after being confiscated by the U.S. Fish and Wildlife Service from a poacher who illegally harvested them. Stockton cared for the terrapins that were evidence while the case was being investigated. 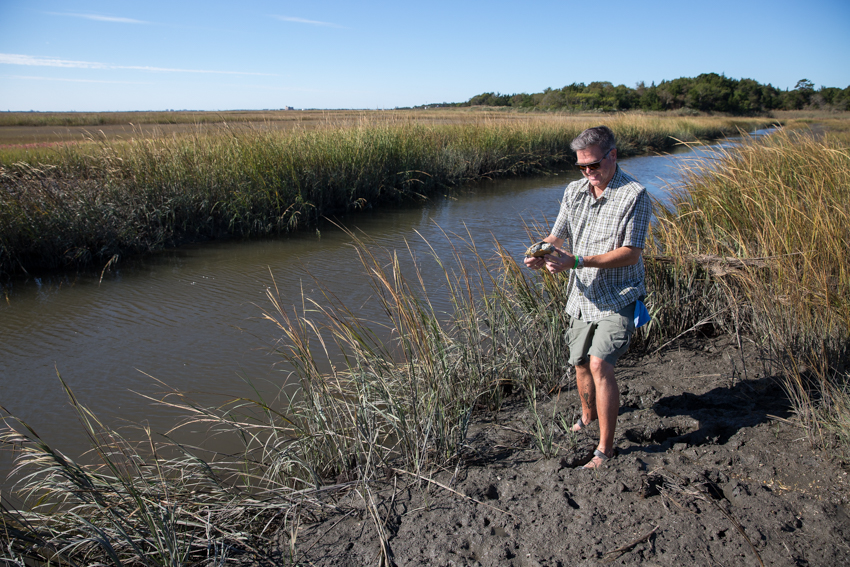 Tim Glenn prepares to send a terrapin back home. 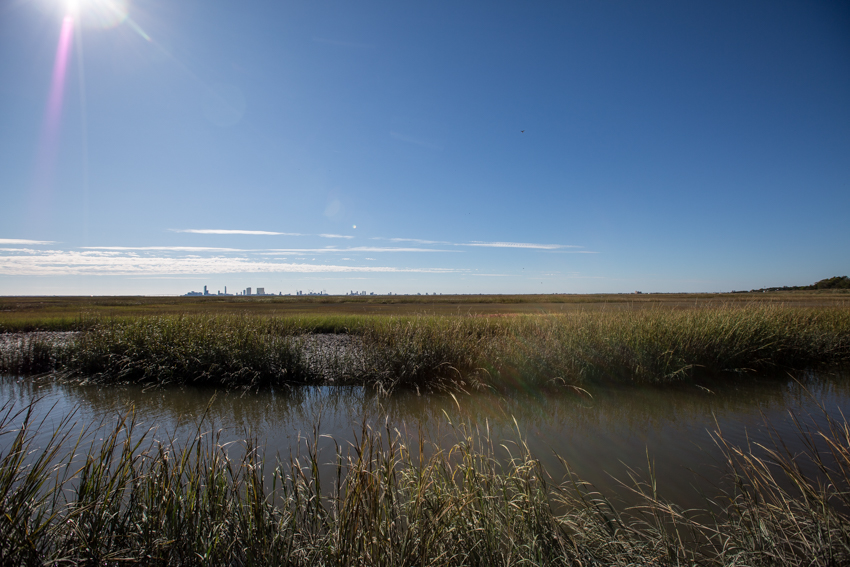 In the distance, a view of Atlantic City is visible. 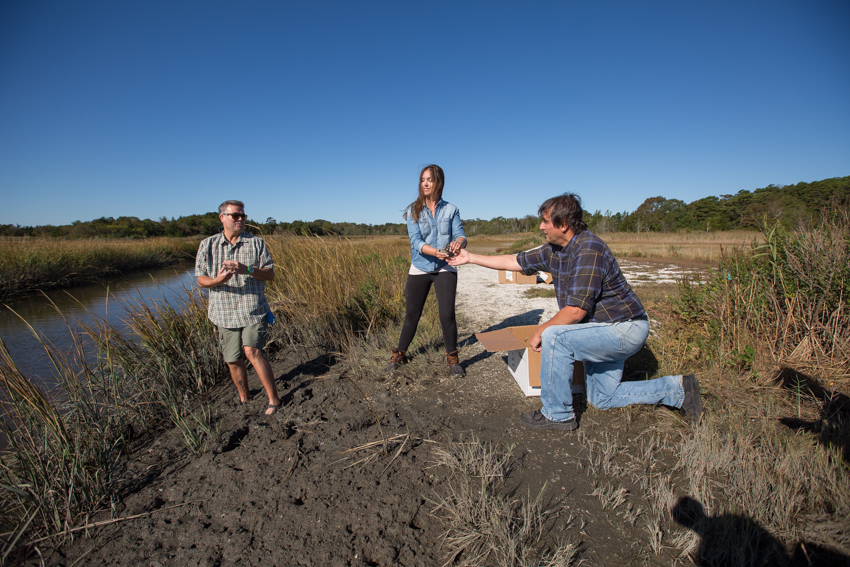 John Rokita hands off terrapins for release. All of the terrapins are females. The species has temperature-dependent sex determination, so incubators are set to 30 degrees Celsius to hatch only females. The terrapins that are killed on roads are females seeking nesting sites. Males do not follow the females to nest. 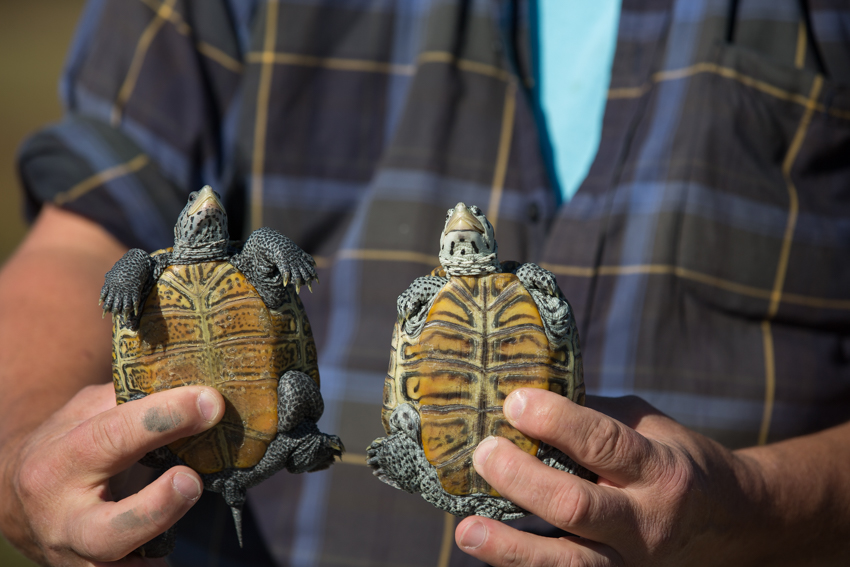 Terrapin coloration and patterns can vary between individuals. 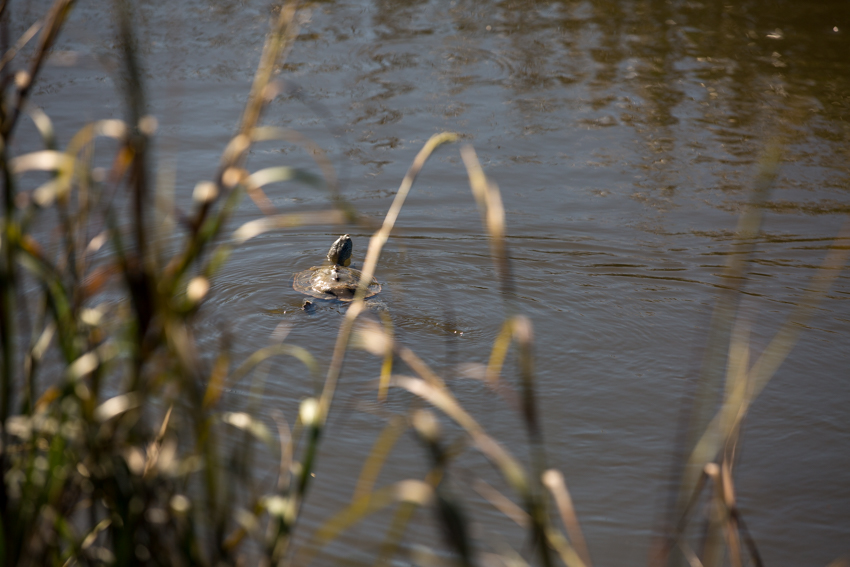 A terrapin resurfaces, maybe pausing to say thanks, before swimming off down the creek. Brian Williamson, research scientist at The Wetlands, shared that 10 adult head-started terrapins were spotted laying eggs along the property's trail this season. "Some of these head-started females return each year up to 3 times to lay eggs along our trail. We anticipate that many more are out there, some nesting in other locations where we may be less likely to encounter them. Interns, volunteers and staff protected 102 terrapin nests on The Wetlands Institute’s property (this year)," he explained. 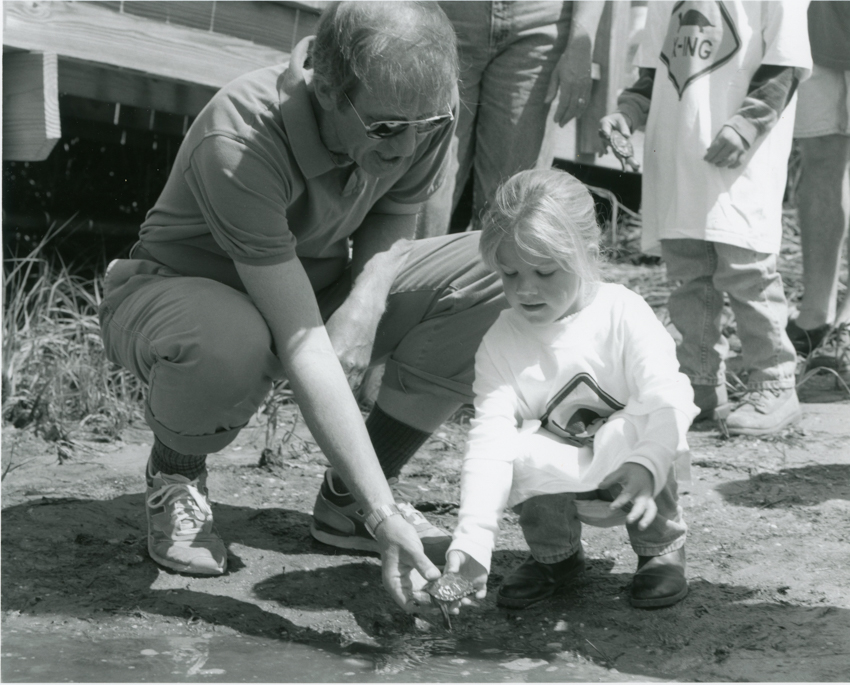 In this image from the University Archives, Roger Wood helps a young volunteer release a terrapin at the end of The Wetlands Institute's saltmarsh trail.