Easily overlooked evidence of a landscape shaped during the Ice Age becomes visible on a walk with a geomorphologist through Stockton's Pinelands campus.

Mark Demitroff, an adjunct instructor who studies the Ice Age and reconstructs what the Pine Barrens environment looked like over time, guided a campus nature tour to show students in his class, "The Pine Barrens," that hints from the frozen past are hiding in plain sight.

There was a time when Galloway Township was within 100 miles of a massive continental ice sheet that ended at Exit 11 on the New Jersey Turnpike. Although the ice sheet never reached Stockton's campus, the cold, dry and windy conditions still had an impact on our climate and geology.

"For extended periods during the last 2.5 million years, a time known as the Pleistocene, there were no pine trees here. Instead, the vegetation was often sparse and even nonexistent—desert-like—in  the most extreme episodes," said Demitroff.

When Demitroff describes how the campus landscape formed, it sounds foreign in comparison to what we see today. "Raging winds blew the campus sugar sand into long dunes and sheets. Desert dust clouded the sky," he said.

Last month, Demitroff and others presented their research on Pine Barrens sand dune fields at the Geological Society of America's annual meeting.

Back in the classroom, Demitroff pointed out the window and said, "There's a laboratory out there."

The class reviewed an aerial image and then headed to the outdoor classroom in the Pinelands.

"I want you to read the landscape like a Piney. With new eyes, you can wonder why the landscape looks the way it does. Look for the old sand dunes and river terraces," Demitroff said.

Evan Yunker, an Environmental Science major, grew up in the pines, but he's learned a lot about his home. "When you think about things with that scale (looking back to the Ice Age), it puts things into perspective," he said.

Maxine Livingston, a Marine Science major, has camped in the pines and explored Wharton State Forest, but she wanted to study the science connected to nature's playgrounds.

Seemingly ordinary places on campus now have a new meaning to students who have walked alongside Demitroff. 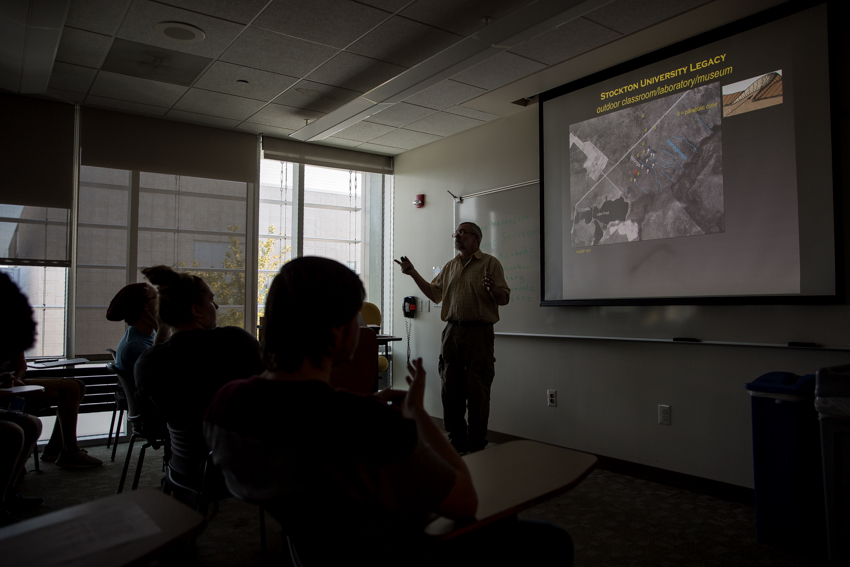 Students look at a circa 1931 aerial image of the campus with markers labeling round ponds called spungs and hairpin-shaped dunes. Mark Demitroff, an adjunct instructor in the School of Natural Science and Mathematics, keeps his lecture brief. "One hour out there is equivalent to three hours in here," he says. 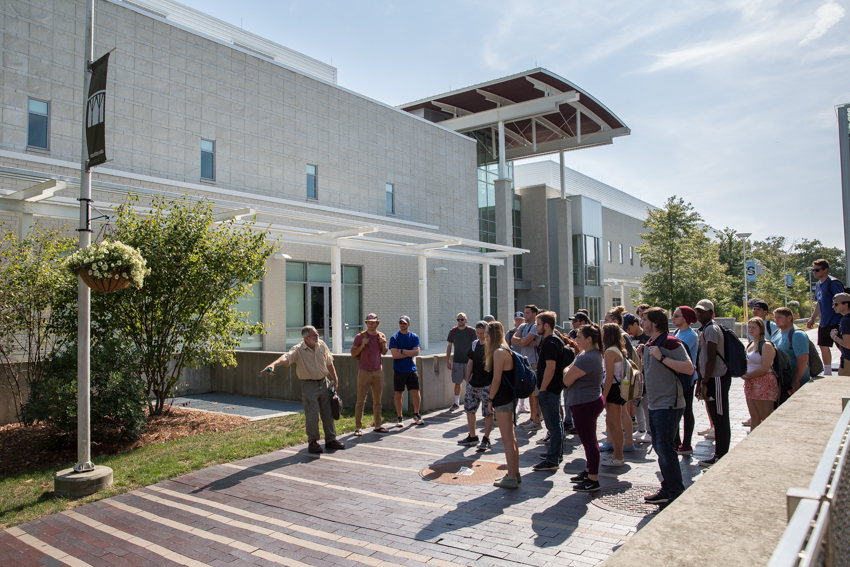 The class stops at the top of the hill that leads down to the D-Wing Circle. "We are standing on a river terrace. This was the bank of an old river in the Ice Age, " said Demitroff. The gravel surfaces that remain of old rivers make stable ground to build on, he explained. 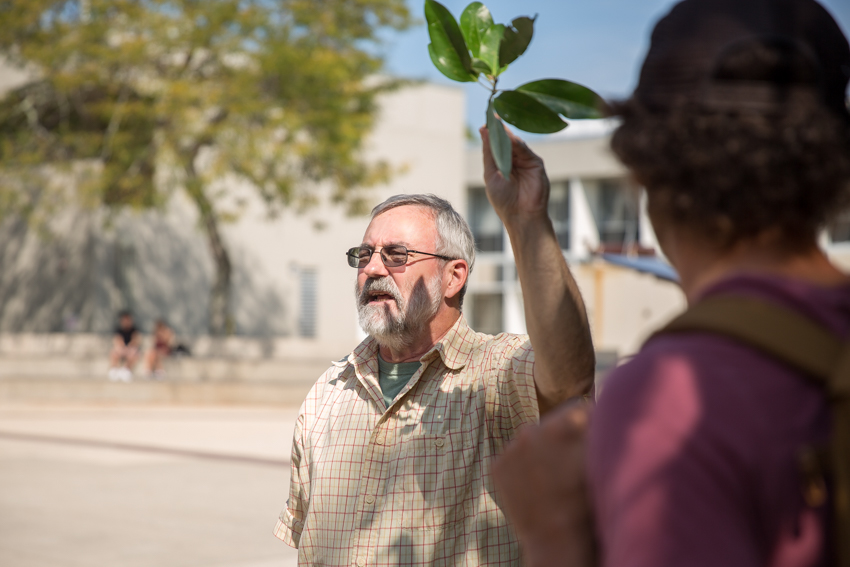 Demitroff points out a native tree called the sweetbay magnolia, named in part for the lowland basins they thrive in called Carolina Bays. Spungs are called bays in Delaware and further south. Further down the path he identified june-berry, also called a shad bush after the fish that lives its adult life in salt water and returns to freshwater to spawn. "The shad run used to begin right when the white flowers bloomed, as did the river herring run. In high school, we would be excused from class for the herring run. We’d catch 100 per hour," he recalled. 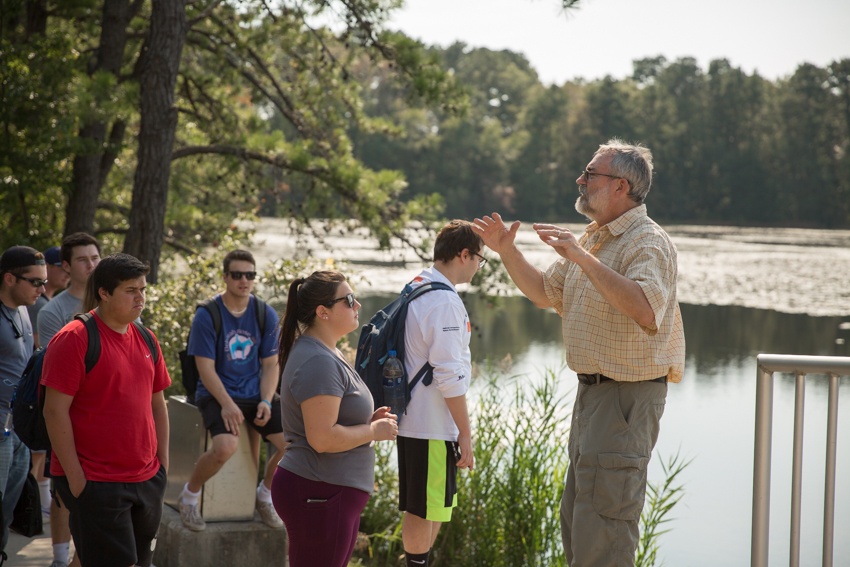 "You are looking at the remains of a cranberry bog," said Demitroff when the class stopped in front of Lake Fred. A concrete dam on Moss Mill Stream formed the cranberry bog that we know today as Lake Fred. Beach plums also grow nearby. "In the Pines, beach plums grow on the south side of rivers. That’s where sand dunes are found. During the Ice Age Pine Barrens rivers would quickly dry up after the brief snowmelt floods, leaving their sandy bottoms high and dry. Strong winds flowed like water off the nearby ice sheet, traveling northwest to southeast. Strong winds plucked sand off the mostly dry river bottoms and redepositing that sand along the southern shores of waterways. Native Americans called the dune side of the river the ‘warm side,’ and often in preference built their trails there," explained. 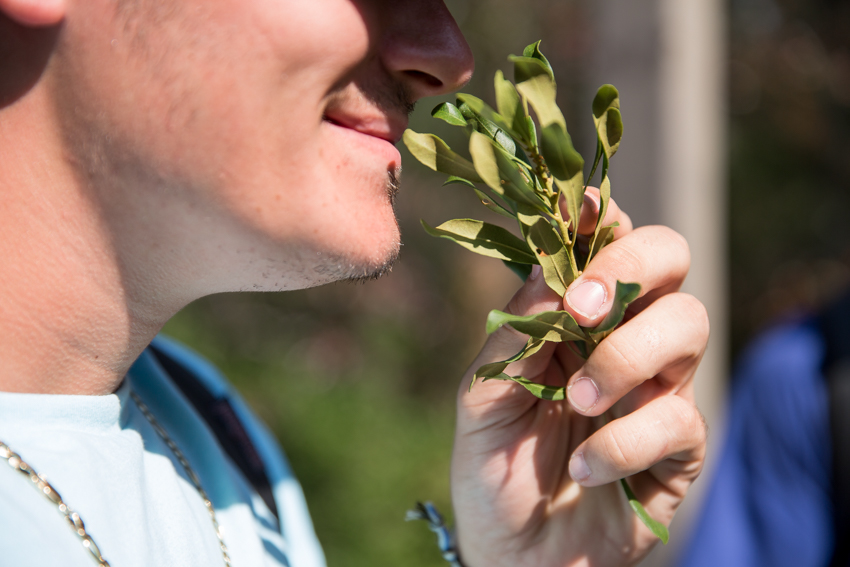 "Pull off a leaf and crush it. What does it smell like," asked Demitroff. Bayberry, a plant common near beaches, grows along Lake Fred and is another clue hinting at the ancient sand dunes that are now covered in vegetation. 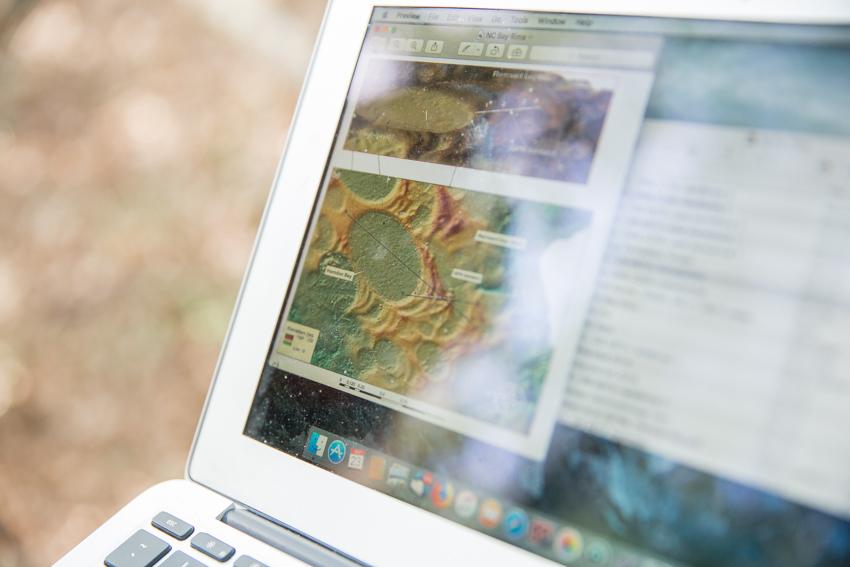 The simple definition of a spung is a closed basin wetland that was carved out by the erosive power of strong winds during the Ice Age. "Sand was plucked from the ground then blown away by wind-action. These are seasonal ponds that are often circular to oval in shape, and further south become mile-wide oriented lakes called Carolina Bays," Demitroff said. This fall, during the class field trip, a spung near the campus police station was mostly dry, but in a few months it will begin to fill up. “In the winter, the trees will no longer pump groundwater to make carbohydrates through photosynthesis, and the water table rises,” explained Demitroff, “and like the back-and-forth of a cha-cha-chá dance, spung water-fill rises and falls with the fluctuating groundwater table." 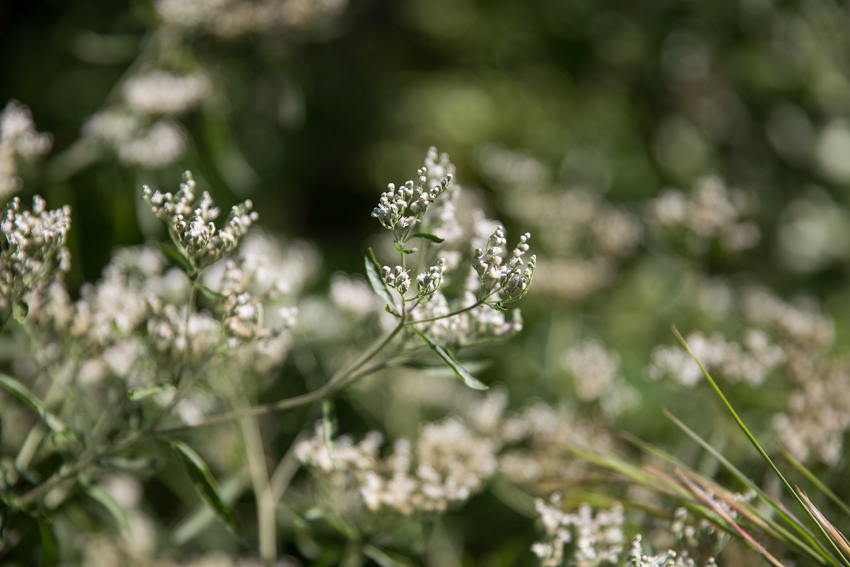 Milk can be made toxic when a cow has ingested a plant from the genus eupatorium. Abraham Lincoln's mother died after drinking milk from a cow that had eaten eupatorium, although on its own, the plant is harmless. Picture is a close relative, the hyssop-leaved boneset, in full bloom on campus. The boneset is particularly valuable to the survival of beneficial insects and was used as a cure for rattlesnake bites. 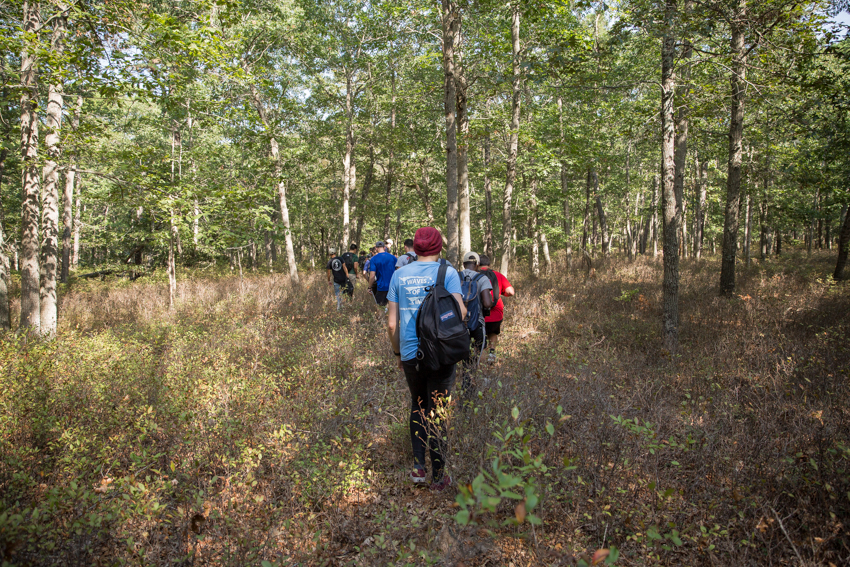 Students walk up to a currently dry spung on campus. "This is connected to an old river, and the water is still flowing beneath us. Native Americans and musk ox could have been found here getting drinking water purified naturally by the sand. This was an oasis," explained Demitroff. Emma Witt, a hydrologist who teaches Environmental Science,  is currently studying this region that is a breeding site and nursery for Wood frogs during the winter and spring. She is monitoring the water level and temperature at the spung with students in her Watershed class and pairing the hydrology data with biological data from Wood frog surveys. They want to answer questions like how long does it take to fill up after a dry period, how much water can it hold, where is the water coming from and what is the overall water budget. 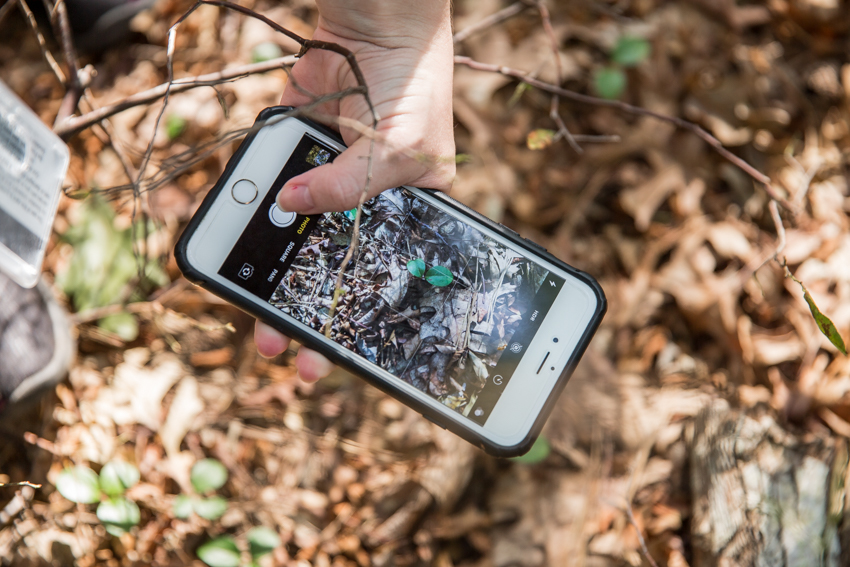 A student photographs a wintergreen (teaberry) plant that is used to make tea and to flavor gum and candy. 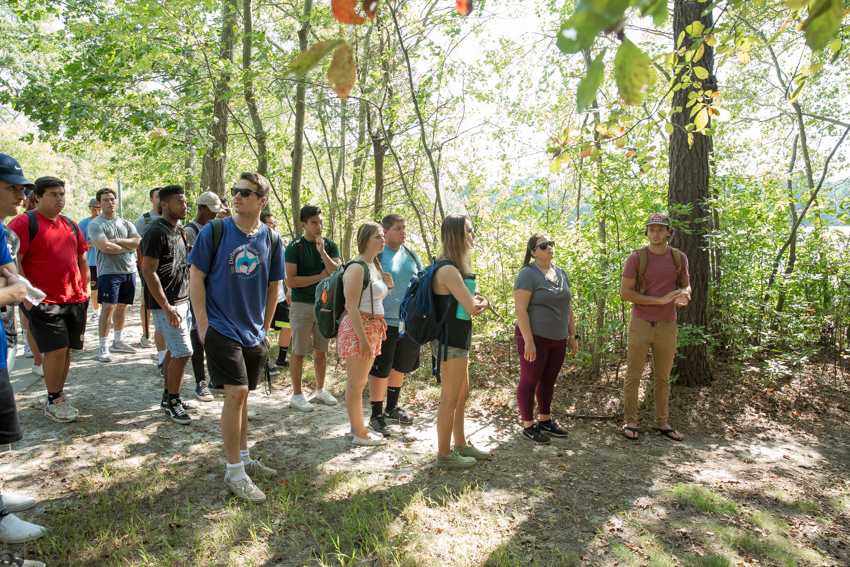