Galloway, N.J. - More than 50 students shared their research projects at the School of Natural Sciences and Mathematics (NAMS) Symposium on April 23 in the C-D Atrium. 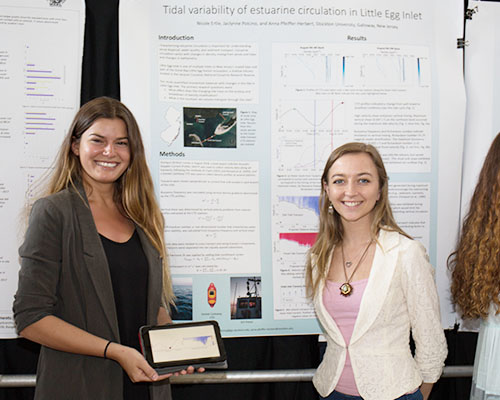 m showcases the many opportunities students at Stockton have to do undergraduate research with faculty,” NAMS Dean Peter Straub said. “It also gives them the opportunity share that work with their peers.”

He said the work was done both at Stockton and at internship sites, and gave students a capstone project they can use if they apply to graduate school.

“This has been growing every year,” Straub said. “It’s a wonderful experience for the students.”

Projects honored at the event were:

Analysis of Soil Bacteria for Production of Antibiotics

Due to the rise of antibiotic resistant bacterial pathogens, the need to discover new antibiotics has never been greater. One approach to the discovery of new antibiotics is through testing soil bacteria for the production of antimicrobial compounds. A typical 10 gram soil sample can contain up to 2 billion bacteria, each producing hundreds of different organic compounds. Considering that most of the known antibiotics are produced by soil bacteria, some of these compounds could have antimicrobial activity. In this study, soil bacteria from the New Jersey Pine Barrens were isolated, cultured, and screened against non-pathogenic bacteria closely related to common pathogens. Organic compounds were extracted from these soil bacteria and subsequently characterized using gas chromatography-mass spectroscopy (GC-MS). Of the compounds in the extract, some are known for their antibiotic activity (e.g. phenazine). The bacteria were identified by DNA sequencing of the 16S ribosomal RNA gene. Preliminary sequencing results suggest some belong to the genus Burkholderia. The following study improves our knowledge of antibiotics produced by soil bacteria. In addition, this study offers novel compounds with possible antibiotic activity.

Due to the advancement of space age, all spaceflight-associated health risks should be studied in detail. Mistakes in double-stranded DNA break (DSBs) repair can lead to carcinogenesis. Previous studies reported contradictory results regarding the effect of microgravity on DSB repair. Cells have two major mechanisms that repair DSBs: homologous recombination (HR) and non-homologous end joining (NHEJ). HR requires a second, good copy of the damaged DNA for repair, while NHEJ adheres two DNA ends together. The goal of this experiment is to determine how spaceflight impacts NHEJ. To accomplish this goal, we will use the budding yeast Saccharomyces cerevisiae as an experimental model. Yeast have several advantages for this line of investigation: 1) Their NHEJ repair mechanisms are well conserved with humans; 2) Their fast proliferation rate generates sufficient material for cellular and molecular analyses; 3) Yeast can live as either diploids or haploids; haploids must exclusively use NHEJ to repair DSBs; 4) DNA damaging agents have been well-studied in this model. Using the confines of a NanoRacks MiniLab, we have engineered an experimental system which will expose proliferating haploid yeast to bleomycin, a DNA damaging agent. Preliminary experiments have identified an optimal bleomycin concentration (1-5 μg/mL) and a sufficient cell density (2.5 x 106 cells/mL). Using these parameters, we will measure NHEJ in both an experimental sample sent to the International Space Station and an Earth control. The results of these analyses will be crucial in forwarding our understanding of NHEJ in space.

Characterizing estuarine circulation is important for understanding larval dispersal, sediment transport and water quality. Estuarine circulation varies with buoyancy inputs, mixing from winds and tides, and changes in bathymetry. This study aimed to quantify momentum balances with changes in the tide in Little Egg Inlet, New Jersey, a major connection point between coastal bays and the Atlantic Ocean. During a 14-hour survey in Little Egg Inlet, an Acoustic Doppler Current Profiler (ADCP) was used to collect velocity data along set transects and a Sontek CastAway CTD was used to collect density profiles at several stations. Results presented here pertain to the Outer Inlet transect which spans from Little Beach (Pullen Island) to Holgate. Velocity data were used to determine vertical shear, and vertical density gradients were used to determine the buoyancy frequency. The Richardson number, a non-dimensional number that characterizes water column stability, was calculated from buoyancy frequency and vertical shear. Over the tide cycle there was variability in the tendency for the water column to go from turbulent mixing during the flood tide to slightly stratified conditions during the ebb tide. Overall net volume transport was landward (573.44 m3 s-1), and varied laterally across the inlet. The results add to our collective understanding of estuary-ocean exchange in well-mixed estuaries and can inform development of hydrodynamic models of the study area.

New nickel complexes of primary amido-​functionalized N-​heterocyclic carbene ligands have been synthesized, characterized, and evaluated for their catalytic activity for transfer hydrogenation, which is the addition of hydrogen across a π-bond using a dihydrogen surrogate. The nickel complexes show moderate catalytic activity for base-​free transfer hydrogenation of ketones under aerobic conditions. Synthesis of half-​sandwich ruthenium complexes featuring these ligands has also been explored. Current work is focused on studying the scope of the catalytic reactions with the nickel complexes, modifying the nickel catalysts for increased activity, and improving the synthesis of the ruthenium complexes. Once the ruthenium complexes have been successfully synthesized, they will be assessed as catalysts for base-​free transfer hydrogenation in air.