Galloway, N.J. – A map outlining 55 places in South Jersey included in the “Green Book” travel guide is part of an exhibition of art, photos and artifacts titled “Driving While Black” currently featured at the Noyes Museum of Art at Stockton University at Kramer Hall, 30 Front St. in Hammonton. 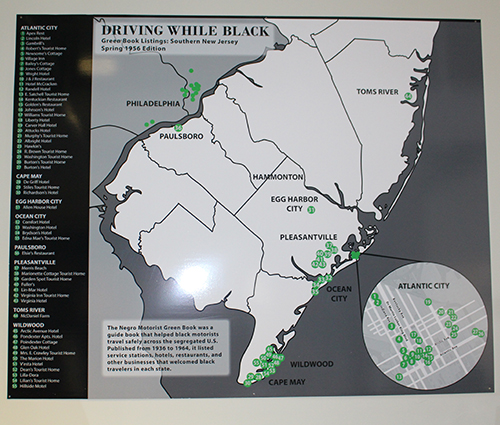 A copy of the map is also on display at the Noyes Arts Garage, 2200 Fairmount Ave. in Atlantic City.

The movie “Green Book,” this year’s Oscar-winning best film, got its name from  The Negro Motorist Green Book, first published in 1936, that helped black motorists identify service stations, restaurants, hotels and other businesses that would serve them as they traveled during the era of segregation.

The map identifies 55 South Jersey locations in the book, including three in Cape May, 11 in Wildwood, four in Ocean City and 27 in Atlantic City.

The exhibition, which runs through May 26, will also feature several special events, including a preview showing of a portion of Ric Burns’ new documentary “Driving While Black.”

Noyes executive director Michael Cagno said a discussion with a colleague who is working on the documentary led to the film preview and the exhibition, which uses art, photographs and historical artifacts to tell the history of why “driving while black” required defensive measures.

“We are looking at the past through the present,” Cagno said. “And the root of it is slavery.”

The exhibition includes a ball and chain, Ku Klux Klan robes and photos from a colorful children’s book “Ruth and the Green Book” written by Floyd Cooper.

A tapestry by Derrick Adams gives new meaning to the phrase “Are We There Yet?” and a collage by Lavette Ballard is displayed on reclaimed wood fencing.

The exhibition also includes more recent work by Dread Scott, and a collection of photos from the Preserve the Baltimore Uprising 2015 Archive project that depict protests after the 2015 shooting of Freddie Gray in Baltimore.

Several events are planned around the exhibition:

Photos of other items from the exhibition are on flickr.

For information on the exhibition contact Saskia Schmidt, Noyes Museum Director of Education, at 609 626-3420 or education@noyesmuseum.org