Galloway, NJ – The popular television show Game of Thrones has made its way onto Stockton’s campus. For the past four years, a course titled “Game of Thrones: Premodern History in Literature and Film” has allowed students to learn about the medieval world, focusing on themes like power and politics. 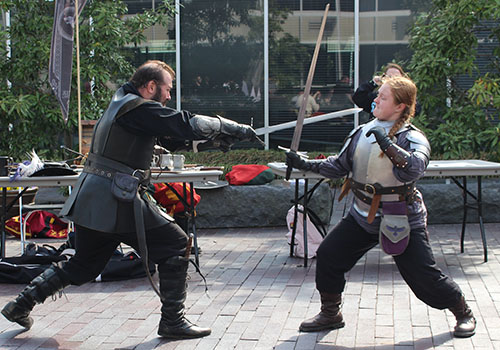 On April 18 Associate Professor of Critical Thinking and First-Year Studies Geoffrey Gust, who teaches the class, and the Knights of Crossford brought a taste of the class to Independence Plaza with a Game of Thrones Extravaganza and Medieval Marketplace.

His students, as well as students from a music appreciation class, were present for the two-hour event that displayed combat, music and revelry.

“We wanted this event to be a kickoff for the start of the show’s new season,” said Gust. “We want people to appreciate the show and the history that goes into it.”

Gust’s students, as well as students from a music appreciation class participated in the two-hour event that displayed combat, music and revelry.

Stockton’s Game of Thrones course includes history and writing and allows students to analyze the history of film. This year is Gust’s third time teaching the course and he was very excited to host the event with his students. Students displayed projects on topics they have covered in the class. 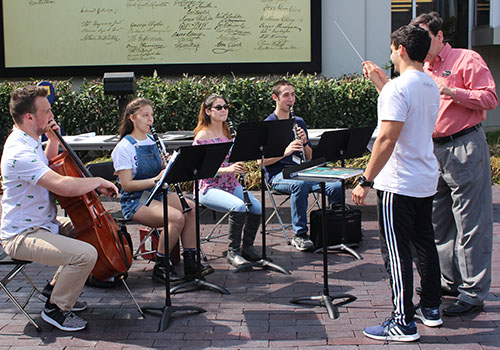 For the first half-hour of the event, the Iron Throne Stockton Musical Ensemble performed medieval music for the marketplace. Students from the music appreciation course were also invited to practice conducting the group for a hands-on learning experience.

The finale of this event was performed by the Knights of Crossford Armored Combat Troupe, which displayed numerous pieces of armor and medieval weapons, and then used them to perform both choreographed and unchoreographed fights for the crowd. Items like swords, whips and shields were used in the battle demonstrations.

Students at the end were invited to practice using the whips and swords under the supervision of the troupe members. This group is also very active in the New Jersey Renaissance Fair and performs the same battles there as well.