Froonjian has been a researcher at the Hughes Center since 2011. He has managed the Stockton Polling Institute since the academic public opinion polling center was established in September 2012. He also teaches journalism as an adjunct professor at Stockton. 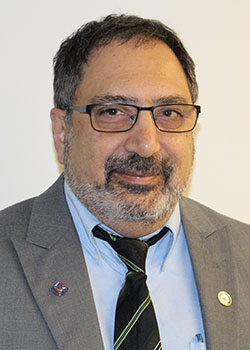 “John’s polls have represented the views of New Jersey residents on topics of vital interest in the state,” said President Harvey Kesselman.  “His broad knowledge of South Jersey issues and politics will enhance the mission and reach of the Hughes Center in the region and the state.”

Before joining the Hughes Center, Froonjian worked for 32 years as a reporter and editor at The Press of Atlantic City, including as a New Jersey Statehouse political reporter, investigative reporter, long-term projects reporter, database journalist and city editor.

“We find inspiration in the record of former congressman and ambassador Bill Hughes,” Froonjian said.  “He was a national leader on the environment, coastal issues, criminal justice, law, economic development, transportation and so much more. These issues remain vitally important to New Jersey.”

The Hughes Center will also build collaborative partnerships with Stockton University faculty, staff, policy centers and students to advance its mission of civic engagement and education.

He also hopes to take advantage of the experience and skills of the Hughes Center’s Steering Committee in guiding the center to a new level of success. The advisory board of high-level business and community leaders is chaired by Dr. Edward Salmon, former president of the N.J. Board of Public Utilities and chairman of Salmon Ventures, Ltd.

Froonjian received his Master of Public Administration degree from Rutgers-Camden, and will receive his Doctor of Education degree (Ed.D.) in Organizational Leadership from Stockton on May 7.