Galloway, N.J. – Opportunity was the theme of Stockton University’s second Diversity Dinner, which brought more than 75 prospective students and their families to the Campus Center on March 22 to celebrate the university’s commitment to providing a high quality college education to every student.

“We want you to get to know us and better understand our core values and principles,” President Harvey Kesselman said in his welcome remarks. “At Stockton we firmly believe that while our commonalities unite us, it is our differences that enrich us.” 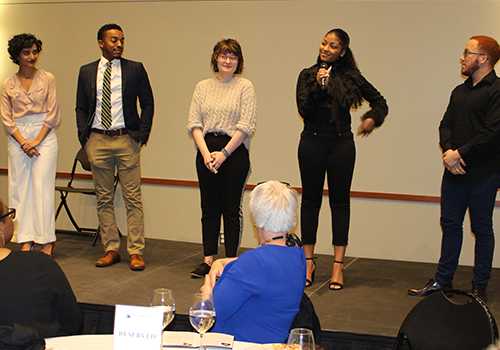 Assistant Director of Admissions Ryan Terrell, who developed and coordinates the dinner, said it is his belief that the best way to get to know someone is by sharing a meal with them.  Members of the Stockton faculty and staff sat at each table and answered questions about the university.

Stockton alumnus and guest speaker Ike Ejikeme said he was very, very nervous when he arrived on campus as a transfer student in 2014.  The son of parents who came to America from Nigeria, he said he worried about fitting in and succeeding in college.

“I was so scared,” he said. “I called my parents for sympathy, and they just said ‘get up there and do what you gotta do.’

So he got involved, ran for Student Senate, and was later chosen to be a student member of the Stockton Board of Trustees.

Now working in Washington, D.C. for the Department of Homeland Security, Ejikeme told the prospective students that they absolutely belonged at Stockton.

“No matter where you are from, you belong here,” he said. “You worked hard to get here.”

A video featured several Stockton students talking about their experiences at Stockton.

Deputy Secretary of Higher Education in New Jersey Diana Gonzalez told the students they are starting a legacy and that it is important that their voices be heard in the public arena.

“I’ve gone into meetings where I am the only woman, and I’ve grown comfortable with that,” she said. “I want to be at the table when the decisions are made.”

She noted that the percentage of African American and Hispanic residents who have college credentials is far lower than the state average, and that is a statistic she wants to change.

“When you hear that voice (inside) that says you don’t think you can do it, just ‘shush’ and say ‘don’t got time for that’,” she said. “You can’t win if you don’t play. You deserve to play. You’re ready.”

She told the students to claim their own positive narrative and not let others write one for them. She also advised them to ask for help when they need it.

“College can be hard,” she said. “Everyone asks for help.”

In his closing remarks, Terrell said the goal of a college education is liberation, and Stockton’s goal is to make sure everyone is competing on equal ground.

“What we do every day is level the playing field,” he said, adding that a degree is not given, it is earned.

“You bring value to the degree, not the other way around,” he said.

View a gallery of photos of the event on flickr.