Local historians share stories about the war efforts made in South Jersey in the special expanded Summer 2018 edition of SoJourn, Stockton University’s journal of South Jersey’s history, culture and geography. 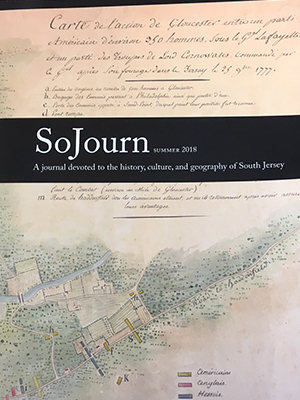 Dedicated to the late Dave Munn (1941-2014), a historian from Gloucester City, this special edition issue is particularly special to Paul W. Schopp, Assistant Director of the South Jersey Culture & History Center (SJCHC).  Schopp noted how impactful Munn was to the South Jersey community.

“His imprint on local history will be long remembered, as will his imprint on me and my career as a historian,” Schopp said in the dedication of the issue.

SoJourn is written by a combination of Stockton students, local historians, and SJCHC staff. It is produced by SJCHC students, center Director Tom Kinsella and Assistant Director Paul W. Schopp.

The new issue is available at the Stockton University Bookstore, Second Time Books in Mt. Laurel, the AtlantiCare Regional Medical Center gift shop and Amazon. The journal can also be purchased from Kinsella or Schopp at Stockton. The price for this special expanded edition is $15 and all proceeds go to the SJCHC publication fund.

Articles in this issue include:

“The Battle of Iron Works Hill” by Salvatore D. Gabriele

“The Battle of the Kegs” by Francis Hopkinson

“Should New Jersey be Considered the Crossroads of the American Revolution?” by Zachary T. Baer