But, the real winners of the partnership were graduates of the program who have benefitted by obtaining jobs at the university and scholarship funding.

“I can’t tell you what it means for our program to have this relationship,” said Superior Court Judge Mark Sandson. 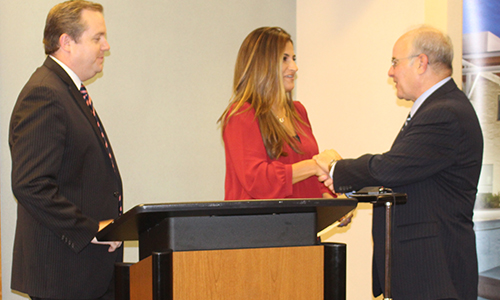 After meeting with Sandson in March, Stockton officials developed a program that so far has offered employment to three Recovery Court participants, and provided scholarship funding to help another, Luana Cordeiro, who never finished her degree in criminal justice from Kean University after becoming addicted to cocaine and heroin.

Stockton President Harvey Kesselman credited Sandson and Assignment Judge Julio Mendez for their “outside the box” thinking about how to help participants.  He told the other participants in the program attending the event that he hopes more of them also have the opportunity to attend Stockton.

“We want more of you as Ospreys flying around,” he said.

Cordeiro, 34, said she was in her final semester at Kean in 2009, preparing for final exams, when she lost control of her addiction to cocaine and heroin.

“All I had left to do was finals to graduate,” she said. “I had been a dean’s list student. But I never took those finals and I never graduated. I got high instead.”

She said she spent the next five years mourning her lost chances by getting high, getting arrested and losing custody of her children. She resisted rehab opportunities and finally in 2014 was turned into police by her mother.

“I wanted to die,” she said. “I thought I was never going to be more than an addict.”

But she finally went to rehab, then Hanson House, and now works at Enlightened Solutions in Atlantic City.

“I thought college was a lost dream,” she said. “But then (Prosecutor Damon) Tyner came up and asked what they could do to help me go back to school. When I got the call that said Stockton would help me, I hung up and cried.”

Cordeiro, who is also raising her three children, said life is not always easy, but she is grateful every day for the opportunities she has.

“I am on a good spiritual ground,” she said. “I pray every day and I go to meetings. I am an addict.”

Participants in Recovery Court attended the event and Sandson said he wants them to know they can also have a better future.

Sandson, who presides over the Recovery Court program, said Stockton has been a tremendous partner.

After meeting with Sandson, Stockton developed a multi-faceted program under the coordination of Marissa Levy, Interim Dean of the School of Social and Behavioral Sciences.

The university currently has eight beds on reserve as Recovery Housing for students recovering from substance abuse. Three Recovery Court participants were offered conditional employment in custodial jobs with the hope that they can become permanent. The Stockton Center for Community Engagement has also been involved with community partners to develop employment opportunities.

The president’s office, Stockton University Foundation and the School of Social and Behavioral Sciences contributed funds toward Cordeiro’s scholarship which covers her tuition, fees and textbooks. Stockton Chief Development Officer Daniel Nugent presented Cordeiro with a certificate recognizing her participation.

The Foundation will also be looking for grants and other outside funding to expand scholarship opportunities to more Recovery Court participants.

Mendez said about 800 people participate in Recovery Court programs in Atlantic and Cape May counties.

“We are helping some 800 people deal with addiction,” Mendez said. “We want to position them into employment. They need stability in their lives, and education is part of that.”