Galloway, N.J. - New Jersey Governor Phil Murphy will be the keynote speaker at Stockton University’s Spring 2018 Commencement Ceremony at 12 p.m. on May 11 at Boardwalk Hall in Atlantic City. 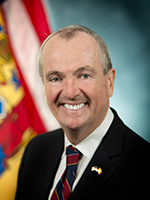 “We are honored that Governor Murphy has accepted our invitation to speak,” Stockton President Harvey Kesselman said. “As we prepare to open our Atlantic City campus in fall 2018, we are thrilled that the Governor will be here to share our enthusiasm for the city and its future.”

Murphy was elected the 56th governor of New Jersey in November 2017.

His father never graduated from high school and his mother worked as a secretary. They inspired Governor Murphy and his three siblings to pursue their educations and be active participants in civic life. He served as New Jersey’s representative on the board of the NAACP, and Finance Chair of the Democratic National Committee. He has led national task forces on education.

Murphy is a graduate of Harvard University and the Wharton School at the University of Pennsylvania. After retiring from Goldman Sachs, he served as U.S. Ambassador to Germany from 2009 to 2013.

This will be the second year that Stockton holds its Commencement ceremony at Boardwalk Hall. This year’s class includes almost 2,000 graduates and more than 10,000 people are expected to attend.