Atlantic City, N.J. - The Noyes Museum of Art at Stockton University is sponsoring a solo exhibition of the “Polipop” work of Mina Cheon, aka "Kim Il Soon", at the Noyes Gallery at The Claridge Hotel in Atlantic City through June 24.

A reception and talk with the artist will be held from 1-3 p.m. April 21 at the gallery. The event is free and open to the public. 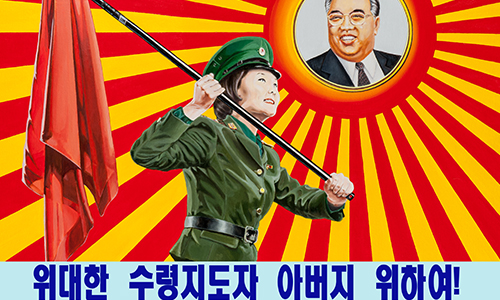 Cheon is a Korean-American new media artist, scholar, and educator.  She has exhibited her political pop art, known as “Polipop”, internationally. Polipop draws inspiration from global media and popular culture and makes work that intersects politics and pop art in subversive yet provocative ways. In particular, the artwork focuses on geopolitical and contested spaces and political pop icons while responding to Asia’s relationship with the Western world. Her work is expressed in diverse mediums such as new media, video, installation, and performance as well as traditional media such as paintings and sculptural objects.

Cheon has assumed different artistic pseudonyms during the past 20 years. Her latest avatar and alter ego is Kim Il Soon, a North Korean artistic persona who is a social realist painter.

“As a Korean, the idea of having two artistic identities, South Korean Mina Cheon and North Korean Kim Il Soon, is an obvious reflection of the country’s state of being divided,” she said. “It makes all the sense in the world that if a country is split, so should the artist in practice”

A faculty member at Maryland Institute College of Art, Cheon divides her time between Baltimore, New York, and Seoul, South Korea. Her debut in the United States was with Ethan Cohen Fine Arts at Art Asia Miami in 2012.