Galloway, N.J. – Stockton University women’s lacrosse team (11-7) captured its first postseason championship with an 11-7 victory over Marywood University (13-8) May 13. The Ospreys won the 2018 Eastern College Athletic Conference Division III Championship for the first time in the five-year history of the program. Tamara Torales (Basking Ridge/Ridge) led the team with three goals on the day and was selected MVP of the ECAC Tournament. 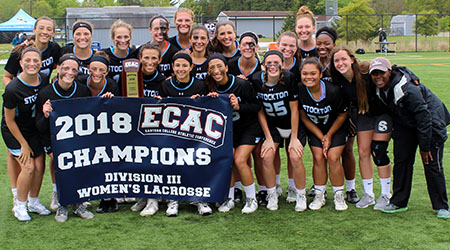 The women’s teams fought a defensive battle early in the first half. Stockton took the lead for good when freshman Nicole Jandras (Egg Harbor Township/EHT) and Abbey Yannacone (Manahawkin/Southern Regional) scored to give the Ospreys a 4-2 margin with 15:43 remaining in the half.

The Pacers sliced the lead to 4-3 before Stockton ripped off three consecutive tallies to forge a 7-3 advantage. Gaby Ojeda (Galloway/Absegami), Michaella Butrico (South Plainfield/South Plainfield) and Danielle Graham (Cherry Hill/CH West) hit the net with 2:29 left until the break. The visitors added one more marker to set the halftime score at 7-4.

The Osprey defense clamped down in the second half, holding the Pacers to three scores in the period. Marywood tallied the first goal of the frame and then Torales potted two goals, including a highlight-reel backhand tally, along with a Kristen Russo (Wayne/Wayne Hills) score for a commanding 10-5 lead. Marywood outscored Stockton 2-1 over the final 16:16, but time ran out and the game ended in favor of Stockton 11-7.

The squads alternated the first six goals of the game for a 3-3 tie midway through the second quarter. Colin Shea (Rumson/Rumson-Fair Haven), Gallo and Ellis were the scorers for Stockton. The Ospreys then took the lead with three straight markers in a span of 2:01. Swedlund potted the first two and Joey Tiernan (Voorhees/Eastern) added the third to make it 6-3, with Caposella assisting on all three goals.

Muhlenberg got one back before halftime and pulled within 6-5 a minute into the third quarter. Stockton answered with tallies by Gallo and Zack Aho (Shamong/Seneca) to extend to 8-5. The Mules again got within one at 8-7 before the Ospreys created some distance with a four-goal run. Swedlund and Caposella scored just 15 seconds apart, both assisted by Gallo.

Tallies by Swedlund and Ellis upped the lead to 12-7 with 11:32 remaining in the game. Muhlenberg made one last charge, scoring three in a row to cut the gap to 12-10 with 5:31 on the clock. Just 20 seconds later, Swedlund ended the rally attempt with his fifth goal of the game. Gallo scored the final Stockton counter with 1:25 to go and Stockton captured the ECAC title with the 14-12 triumph.