Galloway, NJ _ U.S. Supreme Court Associate Justice Neil M. Gorsuch told some 500 students and guests at Stockton University Tuesday that it is up to the younger generation to understand and continue to uphold the ideas on which America was founded.

“The Founders gave us a republic,” he said. “It is up to each generation to keep it.”

Justice Gorsuch spoke at Stockton at a special event arranged through the William J. Hughes Center for Public Policy at the University. Gorsuch and William J. Hughes, Jr. attended school together in their teens in Washington, D.C., and have remained friends for some 40 years, despite coming from politically different families. The Hughes are Democrats and the Gorsuch family is Republican.

“We have known each other since we were 14,” Hughes said in introducing Gorsuch. “His sense of duty to our country and Constitution is second to none.” 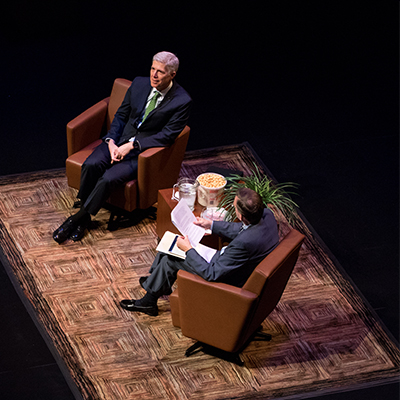 Hughes Center Director Michael Klein welcomed the students, guests and Gorsuch on behalf of the center that carries on the traditions and example of service set by Ambassador Hughes.

Stockton president Harvey Kesselman said the University encourages the exchange of different points of view and aims to be a leader in civil discourse. He cited Hughes and Gorsuch as examples of how two people can be close friends despite differing political backgrounds.

Gorsuch began his talk by honoring Ambassador Hughes and his late wife Nancy as examples of civics and civility in government and life, and his talk revolved around those themes and their importance to America.

“I think we face some serious challenges on both of those fronts,” he said. “America is bound together by ideas, and ideas have to be taught and learned anew every generation in order for our republic to endure.”

He added that keeping a republic is not just about passing along knowledge, but about acting on that knowledge, again citing Hughes as an example to follow.

“If you don’t tackle the issues facing the country today, somebody else will,” he said.

He said civility is also an essential element of civilization. That means listening and engaging with different ideas rather than just ridiculing them.

“To preserve civil liberties we have to work on being civil to one another,” he said.

A self-proclaimed “resolute optimist,” he said Americans live in the longest standing republic in the history of the world, and there are people in other parts of the world who consider American to be a wonder of the world.

He urged students to get involved in public service, saying they would never regret it.

“Get involved in a way you can be proud of, with respect for those around you, especially those you disagree with,” he said.  “It is possible to disagree without being disagreeable.”

Following the talk Gorsuch answered questions from Hughes that addressed his personal life and his career as a judge. Gorsuch said judges make mistakes, and do disagree, but they can still sit down and have dinner afterwards because they all share a love for America.

Appointed by President Donald Trump, Gorsuch took the oath of office in April 2017.  He joked that being on the Supreme Court is a bit like being in high school because a buzzer goes off to let them know when the session is beginning, and they all wear uniforms.

Gorsuch said he became a lawyer because he wanted to help people, and while it is challenging, it has also been fun. His second career choices were fly-fishing guide and ski bum the Colorado native said.

He said he does not believe justices should replace laws with their own opinions.

“A judge’s role is to apply the law as it is,” he said. He said the Founders deliberately made it difficult to make laws, and there are often compromises in making them.

“All of us have ideas of how laws should be,” he said. “But the bad guy has rights, too. Sometimes the bad guy wins, but sometimes you want them to win, so you can, too.”

In a lighter moment Gorsuch noted that being a new justice also comes with some practical responsibilities, which for him include sitting on the cafeteria committee, which was able to resolve a complaint that the marinara sauce on the meatball subs had been replaced with cocktail sauce.

Hughes asked what issues will pose the greatest challenge to the Constitution in the next 10 years. Gorsuch said the challenge of applying an old document, the Constitution, to new technology, citing privacy issues and cell phones as an example.

Asked for the best advice he got from his family, he said it was to always be kind.

“You will have regrets and make mistakes,” he said. “But you will never regret being kind.”

During his visit Gorsuch also had lunch with pre-law students and professors Linda Wharton and Claire Abernathy, during which they asked his advice and talked about his career and role as a judge.

Student trustee Ike Ejikeme said he was inspired by Gorsuch, whom he said seemed very humble and grounded.

“I come from a family of immigrants from Nigeria, and they also believe it is important to help others,” Ejikeme said. “(Gorsuch) is very accomplished, but he is also the rookie on the Supreme Court. He’s still the new guy and it is a new challenge.”

Ejikeme said it was also good for Gorsuch to hear what young people are thinking, especially in areas like technology which play such a big role in their lives.

“I think we are more politically engaged now,” he said. “It is good to hear other opinions. We are becoming more inspired.”