Atlantic City, N.J. – Fannie Lou Hamer’s work as a voting and civil rights activist brought her from her home state of Mississippi to Atlantic City in 1964 where she galvanized the nation with her speech at the Democratic National Convention, talking about the beatings she had endured in her fight for the right to vote, and famously noting she was “sick and tired of being sick and tired.”

Stockton President Harvey Kesselman said this is the first time Stockton has named a site after someone not directly affiliated with the university, but the choice could not be more appropriate.

“Who better that someone of the caliber, commitment, courage and strength of Fannie Lou Hamer,” Kesselman said.

Hamer’s connection with Stockton began 15 years ago, when then N.J. Secretary of State Regina Thomas proposed an event at Stockton recognizing her work. Stockton Distinguished Professor of Social Work and Africana Studies Patricia Reid-Merritt said for the first two years the state subsidized the cost of the annual Fannie Lou Hamer Human and Civil Rights Symposium, but when the state funding stopped, Stockton continued the event.

“Stockton stepped up to the plate,” said Reid-Merritt wh 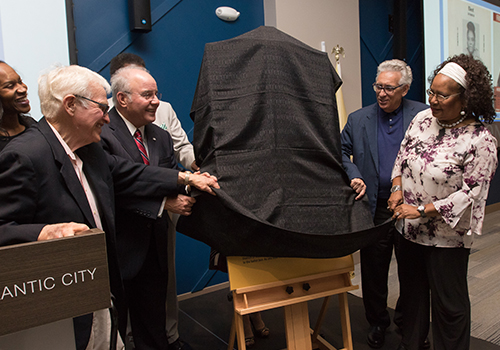 o later also served on a committee to raise funds for a statue of Hamer in her hometown of Ruleville, Mississippi. That statue recognizes Stockton’s contributions.

“Stockton has played a role in preserving her legacy,” Reid-Merritt said.

Reid-Merritt and Professor Emeritus of Philosophy and Religion Joe Walsh brought the recommendation to name the Event Room in Hamer’s honor to the president. Walsh beamed as he walked to the podium for photos, calling it a great day for Stockton.

Atlantic City Councilman Kaleem Shabazz represented City Council, the Mayor’s office, and the local chapter of the NAACP at the event. He read proclamations from the Mayor, and one from City Council that named Nov. 1, 2018 as Fannie Lou Hamer Day.

Shabazz said he was demonstrating outside the Boardwalk Hall convention in 1964.

“This is a humbling day for me,” he said. “I was here when she was in Atlantic City. I want to remind our youth of what she did.”

Hamer’s granddaughter, Jacqueline Hamer Flakes, sent a video message thanking the university. The video was made by Joe Davenport, who is making a documentary on Hamer and attended the 2017 symposium at Stockton.

“My mother would have loved to be there for this occasion,” Flakes said. “She didn’t have the opportunity to get an education afforded to young people these days.”

A large wall plaque with Hamer’s photo from the convention and her story will hang outside the Event Room. 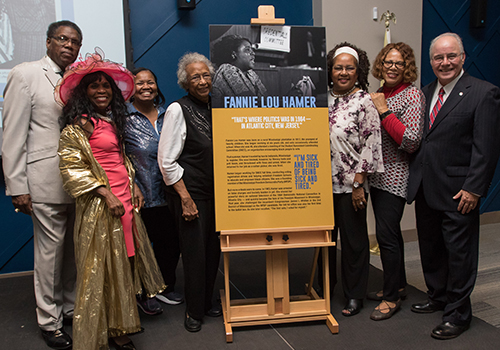 id the room will help educate the public about Hamer.

“So many events are going to be here,” he said. “It will be a hub for the community, and the people who come here will be educated about who she was.”

About 100 people attended the event, including Juanita High, retired executive assistant to former Stockton President Vera King Farris, and a member of the Stockton Foundation. High remembers hearing Hamer speak at the convention.

“I don’t remember how I got in,” she said. “But I remember her saying how she was “sick and tired of being sick and tired,” and thinking about the courage it took for her to get up to speak.”

Stockton Professor of Music Beverly Vaughn brought participants to their feet with a musical tribute that included Hamer’s favorite song, “This Little Light of Mine, I’m Gonna Let it Shine,”

Professor of Communication and Africana Studies Donnetrice Allison, who moderated the event and organizes the annual Hamer symposium, said the naming will allow many who had never heard of Hamer to learn more about her crucial role in the civil rights movement.

“We are doing what no other university is doing,” she said. “We are very proud of that.”