Galloway, N.J. – Atlantic City Mayor Frank Gilliam, Jr. told incoming Stockton University EOF freshmen and guests Thursday that the New Jersey Educational Opportunity Fund turned him into someone who wanted to help his city, not take from it.

“It’s a family,” he said. “You begin to create friendships and opportunities that you would not have anywhere else,” Gilliam said. 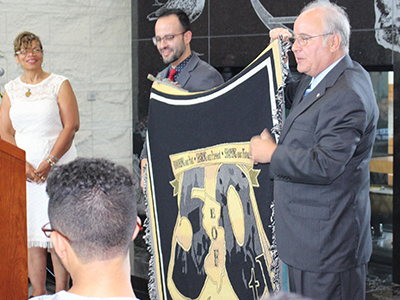 Stockton celebrated the 50th anniversary of the signing of the legislation that created EOF with a program that highlighted a Stockton EOF participant from each of the five decades.

The EOF provides financial assistance and support services to students from educationally and economically disadvantaged backgrounds. But, just as important, EOF provides a safety net and a family of support.

Stockton President Harvey Kesselman, who ran the EOF program at Stockton in the 1980s, said it was the lessons and experiences he had with EOF that helped prepare him for his role today.

“I owe EOF the life that I have at Stockton” he told freshmen. “You are now part of the EOF family.”

Dr. Maralyn Mason, director of EOF, said she felt it was important to recognize a day that has had such an impact on thousands of students who might not otherwise have been able to attend college, or succeed once they got there.

“One act changed thousands of lives for years to come,” she said, noting that this year’s 135 EOF students include 50 from a new Atlantic City program.

Vice President for Student Affairs Christopher Catching said his interested in working at a college started when he was an EOF student.

"You see the world differently," he said. "It stretches you. I remember the names of everyone who helped me during my summer 25 years ago." 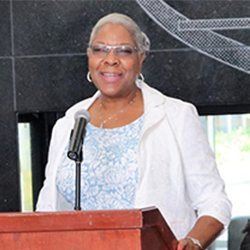 A first generation college student, Stewart-Davis expressed love and gratitude for EOF and the faculty that helped her get to where she is today.

“My parents didn’t graduate from high school but they had dreams for their girls,” she said. “My mom said ‘you go sign up and someone there will tell you what to do.’  That was the EOF.”

She shared how a bad breakup with a boyfriend led to her failing classes, but again the EOF counselors helped her make up the work. 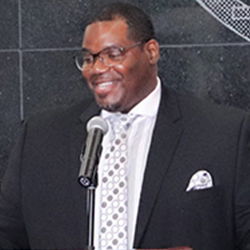 A first generation college student and foster child, Gray said EOF gave him “sense of community and family” that he did not have before. He said the summer program taught him confidence and discipline, and recalled having his last meeting with his case worker when he turned 18 in the same wing at Stockton where he now works.

“EOF was not just a simply a summer higher education prep program,” he said. “This is a program that journeys with you and walks with you through all of your life processes for the rest of your natural born days, and I am a living testament to that.”

He urged students to not just learn, but pay it forward.

You are changing the trajectory of your family tree,” he said. 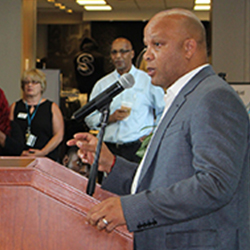 Before he came to Stockton, Frank Gilliam, Jr. admitted he could just as easily have landed in jail.

“In 1993, my world was a whirlwind,” he said. “I had no idea, I had no clue, and I had no vision. I am in Atlantic City doing nothing but wreaking havoc, doing things I know I shouldn’t be doing.  The EOF was a tuning point of my life.”

He shared his journey to show the students that it does matter where you come from because there are always opportunities and EOF will help find them.

“Life is never a clear rod to success,” he said. The only thing that will make you great is belief in yourself. The town I took so much from I am now helping to make great.” 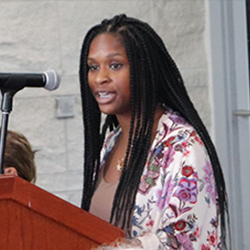 College was Aliya Austin’s first taste of independence and responsibility, and she credits EOF with putting her on a successful path.

“I needed those six weeks of discipline and support,” she said of the summer EOF program “I don’t think I would have made it through college without that training.”

She shared the relationships she formed and how the people she met are her closest friends and biggest support system. She considers herself an introvert and this program helped her come out of her shell and make life-long friends that will always be there for her.

“The EOF guided me through picking classes and financial aid,” she said. “It helped me grow up. EOF was the beginning of my life. Take what  you can from it and succeed.” 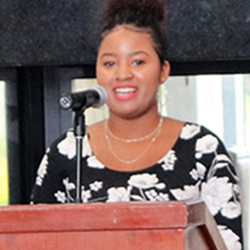 A current student at Stockton University who is still learning about the benefits of EOF, Zaiyana Jackson described it as a “reality check” that always has your back and always has an open door.

“I am still on my journey,” she said. “You think you know what you are doing, and it’s going to be all fun. But studies have to come first.  I am growing into the best woman I can be. EOF is there to say ‘we are your safety net'.”

She is grateful for the support that EOF has given her in regards to making sure her financial aid is in order, her classes are correctly picked out, and her overall wellbeing at the university.

Freshmen attending the summer program said it has been a good introduction to college life and Stockton, even if it does involved getting up around 5:30 a.m. to exercise around Lake Fred before classes.

“It’s worth it in the end,” said Timothy Engram of Pleasantville. “It’s a really good opportunity to make relationships.”

“It’s been good just getting to know the campus, where classes are, and how it’s different from high school,” said Moustafa Maarouf of Egg Harbor Township.