“Efforts to balance gun rights have shaped American history,” said Winkler, a specialist in American constitutional law and author of Gunfight: The Battle over the Right to Bear Arms in America.

Ultimately, he said, it is politics, and not the amendment, which will determine future gun control laws.

“It’s hard to use it today as the founders intended,” he said, Winkler said. 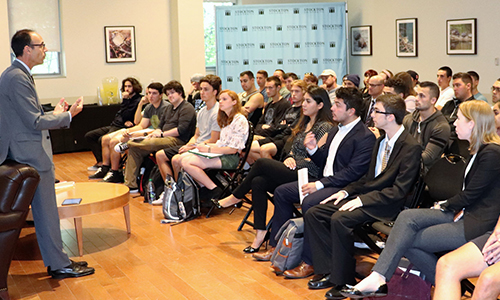 In his talk on “The Strange and Surprising History of the Second Amendment,” Winkler provided a view of history viewed through the use and banning of weapons. He cited laws in England in the 1700s that would later influence the writers of the U.S. Constitution. He noted that King George III imposed regulations on colonists and confiscated firearms.

“Colonists prized their guns because they had no Army,” he said. “They had a citizen’s militia, the Minutemen.”

He said the founders sought a Bill of Rights to protect state rights and individual rights. They feared the federal government should never be able to disarm the people. But, he said, even with the citizen militias, guns were registered to keep track of where they were and who had them.

After the Civil War, the Union army let African-American soldiers keep their guns because they could not pay them, Winkler said. It was the first time blacks in the south had guns. But later on groups like the Ku Klux Klan would hold raids to take guns from the homes of black families so they could not fight back.

Winkler also dispelled the image of the Wild West as a place where everyone carried a gun. He said while a gun was necessary for protection in the wilderness, many new towns actually prohibited guns as way to encourage development and promote safety for people who had to physically take their money to the bank.

“The gunfight at the OK Corral was unique. It became famous because it was not normal,” Winkler said. The gunfight developed because the Clantons refused to turn in their guns when they got to town.

Winkler also touched on how the role of the National Rifle Association has changed from a group that used to advocate for gun control and restricted concealed-carry laws to one that supports few limits on gun ownership.

“President Ronald Reagan said there was no reason a citizen on the street today should be carrying weapons,” Winkler said.

Most recently, in 2008, the U.S. Supreme Court said an individual has an unequivocal right to carry a gun for self-protection.

“But Justice Scalia, who wrote the decision, also said that the right to bear arms is not unlimited,” Winkler said. Certain types of weapons could be banned.

Winkler said the court decision was a middle path, but there is great extremism in society’s view of guns today.

“We don’t have to choose between gun rights and gun control,” he said. “We can find a middle path.”

During Winkler’s visit he also met with and spoke to students in Political Science Professor Linda Wharton’s class.

The annual Constitution Day event is sponsored by the Political Engagement Project/American Democracy Project, the William J. Hughes Center for Public Policy, the Office of Service-Learning and the Office of the Provost.