Winners of the CSTA-SNJ Computer Science Competition pose with Stockton mascot Talon. Below: Lynne Kesselman checks on students' progress and the staff and students who make it all possible. 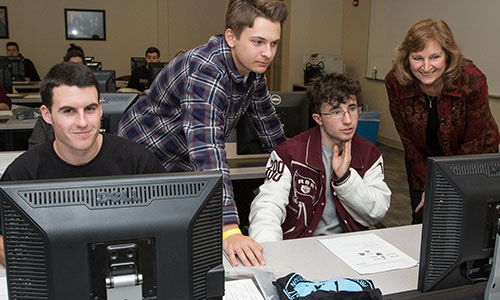 But after more than two hours, just one team successfully solved all eight problems

The Freehold High School team of Melissa Hoff, Kaitlyn Laohoo and Mike Chunko took first place in the competition, winning trophies for themselves and their high school.

“We split up the problems based on our strengths and then helped each other,” Laohoo said. “The problems were challenging, but not so hard we couldn’t do them.”

Eighteen high schools participated in this year’s event, which was almost double the size of last year. 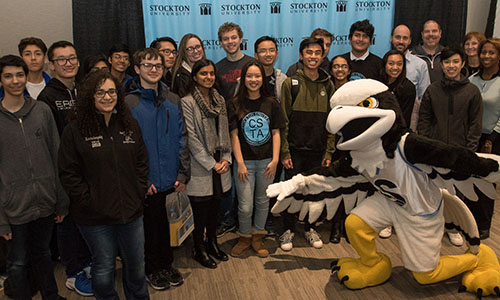 The competition is coordinated by Demetrios Roubos, associate director of information systems and security administrator at Stockton, who develops the problems with his students. He said they try to find a balance, so that problems are challenging but still at the skill level that high school students could solve at least some of them.

“It’s very heavy on applied science this year because we wanted to have problems that were practical and that these students might actually have to do one day,” he said.

Freehold Computer Science Magnet Program teacher James Gill said he and his students were impressed with the problems.

“They really were excellent,” he said. “We just had a discussion about it. It gave them a chance to try things that were a little more difficult.” 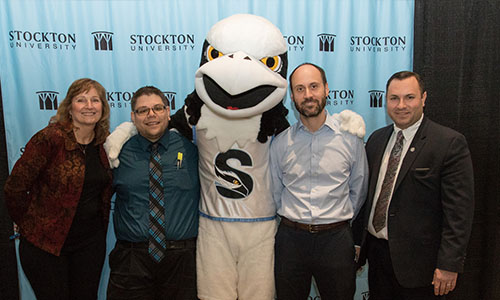 “Computer science is an incredibly important skill today,” he said. “Competitions like this one give you a way to take your skill set to the next level.”

He said more students show an interest in computer science once they realize it includes areas like video game design and robotics. In EHT students are introduced to the field in middle school.

Stockton’s First Lady, Lynne Kesselman, a former computer technology teacher at EHT High School, helped organize the first competition at Stockton. She was thrilled to see how many more schools are participating and said a teacher told her a student enrolled at Stockton after participating in a previous competition.

Stockton offers bachelor degree programs in Computer Science and Information Systems and a Master of Science in Data Science and Strategic Analytics.

Dean of Enrollment Management John Iacovelli invited the students to return for the April 8 Open House or for tours held Monday through Saturday.

More information about Stockton is online at Stockton.edu