The five member delegation led by the President of Zhanjiang Overseas Friendship Association, Mr. Zhong Li, were traveling as part of a North American Tour, with stops in Canada, USA and Mexico. 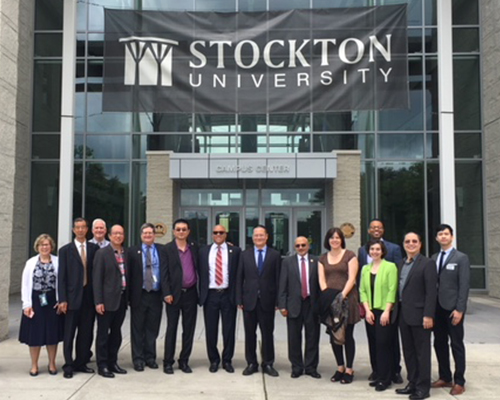 The delegation received a tour of Stockton’s new Atlantic City campus along with two additional Chinese American Businessmen, Mr. Peter Liang and Mr. Ricky Hoang. The group met with members of the Atlantic City Chamber of Commerce after their tour.

This is the second time that representatives from Zhanjiang have visited Atlantic City and met with Stockton officials. The delegation is highly interested in developing cultural exchange opportunities for their students, faculty and Stockton’s as well.

“Atlantic City hopes that by having those students come to Stockton, it will lead to Chinese families considering Atlantic City as a place for second homes and business investment and development,” Jackson said.

Business Studies and Marine Sciences seemed to be the central programs of interest.

“It was clear that they see Stockton as a great opportunity for their students and Atlantic City as an upcoming place ripe with opportunity,” said Jackson. ”Mr. Zhong Li said he would be pleased to send his son to Stockton.”