Galloway, N.J. _ New Jersey’s beaches are in better shape than they were before Hurricane Sandy, and ongoing coordinated efforts by multiple government agencies and researchers at Stockton University to build a statewide system of protection will ensure they remain viable both for residents and tourists.

As the Jersey Shore enters the 4th of July holiday and peak beach season, the William J. Hughes Center for Public Policy and the Coastal Research Center at Stockton University hosted a New Jersey Beach Report at Stockton’s Carnegie Center Wednesday to highlight the status of the state’s beaches.

Stewart Farrell, executive director of the Coastal Research Center, outlined the progress of beach replenishment in New Jersey.  The CRC was created after Hurricane Gloria in 1985 to track and compile data on New Jersey’s beaches after the state was denied FEMA funding because of a lack of confirmed data on the damage to the beaches. 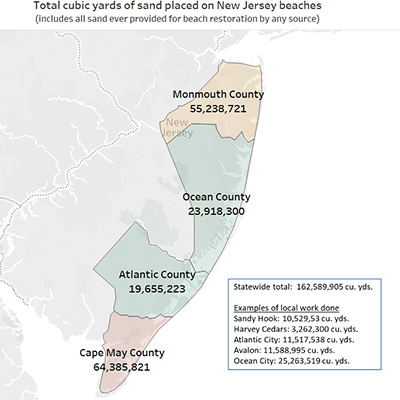 stimated data compiled by the CRC and analyzed by the Hughes Center shows almost 163 million cubic yards of sand has been placed on New Jersey beaches at a cost of $1.2 billion, with some projects dating back to the 1930s.

Farrell said the protections put in place since Sandy will mean greater protection from future storms, but that water will always look for the weak spots, which is why a systemic approach to beach projects isimportant.

“Consistency of the structure is vital to the success of the project,” he said.

David Rosenblatt, Assistant Commissioner for Engineering and Construction with the New Jersey Department of Environmental Protection, said the beaches are in very good condition, and the goal is to maintain them and also address flooding in back bay areas.

“The challenge now is to meet expectations for the future,” he said. “We will also be focused more on the back bay and how to address concerns there.”

He said the DEP also wants to move away from “spot to spot” projects and invest in more regional planning and solutions.  He praised Farrell and the Coastal Research Center for providing the research and data needed to get the jobs done.

“Since Hurricane Sandy, this work has been non-stop,” Watson said. “We have dredged, pumped or placed more than 40 million cubic yards of sand onto the beaches from Mantoloking to Cape May Point…that’s enough sand to fill Lincoln Financial Field approximately eight times.”

The Army Corps is currently building one of the largest beach fill projects in its history in northern Ocean County. This dune and berm system will run 14 miles from Point Pleasant Beach to the border of Island Beach State Park.

In addition to the dune and beach projects Watson cited the recently completed Absecon Inlet seawall in Atlantic City that involved 99,000 tons of stone. An ongoing Port Monmouth project includes the construction of levees, floodwalls, pump stations and dune and beach fill along the Raritan Bay and Sandy Hook Bay.

NEW JERSEY BEACHES BY THE NUMBERS 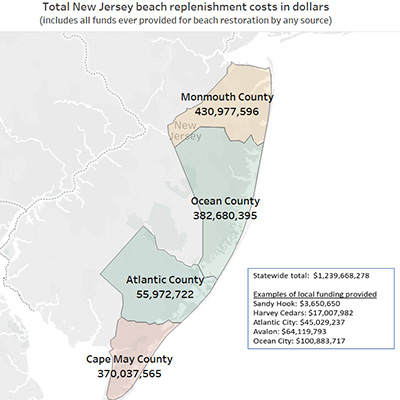 106: Number of beach locations that are surveyed twice a year as part of the New Jersey Beach Profile Network.

$20.6 billion:  Amount generated by tourism in the four shore counties (Atlantic, Cape May, Ocean and Monmouth) in 2017, 48 percent of the total $43 billion spent.