“I’m not sure we are that organized today,” King said. “We are not as organized as we need to be.”

The theme for this year’s symposium was “The New Civil Rights Movement in the Age of Social Media.”

Professor Donnetrice Allison, coordinator of the symposium and the Africana Studies program at Stockton, introduced a video celebrating Hamer by noting how easily images from 50 years ago can be juxtaposed by images from today.

Hamer was a native of Mississippi who became a noted civil rights activist in the 1960s and spoke on behalf of the Mississippi Freedom Democratic Party at the 1964 Democratic Convention in Atlantic City.

In a talk that was part history lesson and part call for action King referenced 19th century German historian Leopold von Ranke and presidents William McKinley and Lyndon Baines Johnson to make his argument that humanity is currently in a “dip.”

Using charts and photos, King said what he has learned from studying history is that over time technology has steadily improved, but humanity’s path is more a squiggly line of ups and downs that include the Holocaust and slavery.

He cited the volume of police shootings across America that might have gone mostly unnoticed if not for social media. It was those reports that convinced him to become active.

“A dip can be short or painfully long, depending on our organization,” King said. “We are in a painful dip right now. But together we can find our way out of it.” 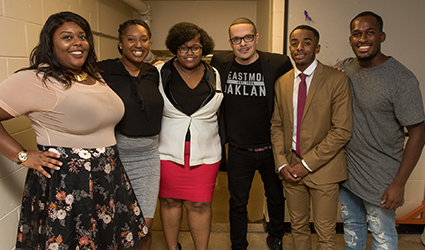 Mahalia Bazile, president of Unified Black Students Society, a co-sponsor of the symposium, said it allows participants to remember the past and reflect on the present.

“Our mission is to speak about race not as a problem to solve, but a conversation to be had,” she said.

Stockton University president Harvey Kesselman echoed that theme, noting that Fannie Lou Hamer had a voice that was passionate and soul-stirring.

“She did not back away from the tough conversations,” he said. “Her patriotism challenged America to do better.”

In a panel discussion after King’s speech, speakers spoke about white supremacy, politics and society. Political Science professor James Avery said politics has become more racialized, and that the election of a black president did raise concerns about loss of power.

Anthropology professor Nazia Kazi said white supremacy in America is “a foundational feature of who we are, so entrenched it is hard for people to see it.”

“This symposium allows us to engage in a discussion of what it means to abolish white supremacy in a nation that was founded on it,” she said.

Joe Davenport, who is making a documentary on Fannie Lou Hamer, urged people to have the tough conversations.

“Don’t shy away from difficult topics,” he said. “There are minefields, and people walk into them and blow themselves up. You have to learn how to do it. Make the effort. Walk into the minefield carefully and maybe you can diffuse it and make progress.”

King urged participants to become more active. He said he has used social media to organize events, but more is needed. Awareness alone, he said, does not bring change.

“We are a poorly organized group of genuinely outraged people,” he said. “We need organized people to get us moving in the same direction. We need energy and we need well developed plans.”

The symposium also included performances by the Afro-One dancers and music led by professor Beverly Vaughn.