Galloway, NJ _ Santa Ono was just 14 years old the first time he tried to kill himself by swallowing a handful of cold medicine pills with a beer in his bedroom.

He woke up the next day and his family never knew, but the incident revealed a simmering mental health problem that would not be diagnosed for years.

“I really didn’t think my life was of value,” said Ono, who is now the president of the University of British Columbia and an advocate for mental health initiatives and suicide prevention.

In a very personal speech that culminated Stockton’s extensive Suicide Prevention Month initiatives, Ono talked about his own struggles as the seemingly “average” middle child between an older brother who was a musical prodigy and a younger brother gifted in math. 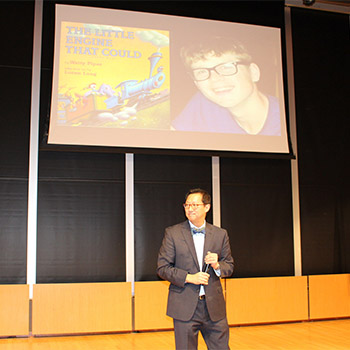 He also talked about a University of Cincinnati student Brogan Dulle, who died by suicide, and how it inspired him as the university’s president at the time, to reach out to students and colleges to raise awareness of mental health issues and prevent more suffering.

“Throughout life every person is vulnerable to changes that might send them spiraling into difficulties with mental health,” he said.

The key, he said, is for friends, family, schools and universities to reach out to help. He said the stigma about mental health may prevent people from seeking help on their own.

“Sometimes you do need help,” he said. “It’s not enough to just say ‘I think I can,’ ”Ono said, borrowing a phrase from a favorite children’s book The Little Engine That Could.

Ono’s father, a mathematician, emigrated from Japan in the late 1950s, and Ono said racism and hostility carried over from World War II also affected his childhood. Though born in Canada, he was raised in Philadelphia and Baltimore.

“There was the stress of trying to fit in as one of just two Asian families in our neighborhoods,” he said. “I was bullied.”

His second attempt at suicide came when he was working as an assistant professor at Johns Hopkins University in Baltimore, struggling unsuccessfully to get funding for research. He was diagnosed with mild bipolar disorder and this time did get treatment with drugs and psychotherapy. He said his wife also helped him recover because he knew someone cared about him.

He said he rarely spoke about his mental illness until he met author Jasmine Warga, author of My Heart and Other Black Holes. 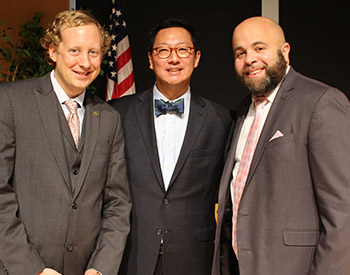 He praised Stockton’s Assistant Director of Counseling Nathan Morell and the University for its Peer Education wellness, counseling, and suicide prevention efforts, saying the programs at Stockton are a model for others. He said as a university president he knows that despite how happy they may look, many students struggle with mental health issues.

“All of us struggle, whether we are big engines or little engines,” he said. “The solution is what you are doing here (at Stockton).

He cited a line from the John Lennon song Imagine that says “Imagine you are not he only one.”

“The louder we can say ‘you are not the only one,’ the sooner we can get rid of the stigma of mental health,” Ono said.

Dean of Students Pedro Santana said the message for Suicide Prevention Month is “it is okay to ask for help.”

Morell asked the more than 100 students and staff attending the talk to spread the word that help is available on campus.

“We choose love, not fear,” he said. “Spread the word today. We can open the door, smile, and share a kindness.”