But, as 24 accounting students at Stockton University learned, being a special agent for IRS Criminal Investigations means you might uncover a money laundering operation for terrorists, resulting in an armed raid.

The day ended when, armed with bright red or blue “handguns” and wearing protective vests, they stormed the sites under investigation and made arrests.

“It was awesome,” said student Andrew Garrity, 22 of Lacey Township in Ocean County. “I 100 percent want to do this.” 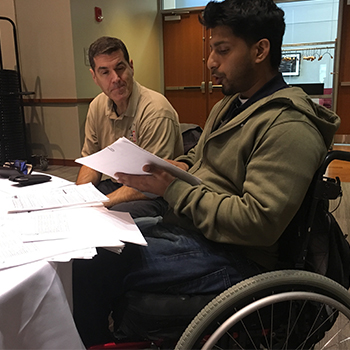 Stockton assistant professors of Business Studies and Accounting Leo Previti and Barry Palatnik brought the program to Stockton to give students exposure to a different type of career in accounting.

“The important thing for us is that it was experiential learning,” Palatnik said.

Students were “sworn in” as special agents in the morning, carried real, if older model, radios to communicate during surveillance, and wore IRS protective vests.

IRS Special Agent Robert Glantz said the day gives students a glimpse of a career path they might not have thought of. Several Stockton graduates who are working in the field participated in the simulation.

IRS Special Agent Scott Smith, ’92, said students did a good job interrogating him, even though he gave them a hard time during questioning.

“They paid attention,” he said.

“I thought I was going to be an accountant who sat in an office,” Ludwick said. “I’m still using the same skill set, but it’s a whole different perspective.”

Students said the day showed them how they could apply what they are learning in different ways.

Elizabeth Hartman, 24, of Estell Manor in Atlantic County said she has known since she was 18 that she wanted to work for the IRS doing investigations.

“I learned how to look at different things, connect documents and find things that don’t match,” she said of the simulation.

Glantz said the day condenses what could be months of work into a one-day simulation, but students still get an idea of what an investigation entails.

Not every student may want the excitement of a criminal investigation, but they all got a taste of a different way to apply their skills.

“Accountants don’t have to just sit at a desk,” Tyler Hamblin, 22, of Brick Township in Ocean County, said.