“When Bill (Hughes) sat down with you, he listened,” former Vice President Joe Biden said in presenting the Distinguished Lifetime Achievement Award to U.S. Ambassador William J. Hughes at the Hughes Center Honors program at the Stockton Seaview Hotel & Golf Club.  “He reached agreement and moved the process along. It is only through consensus that the United States can continue to function.” 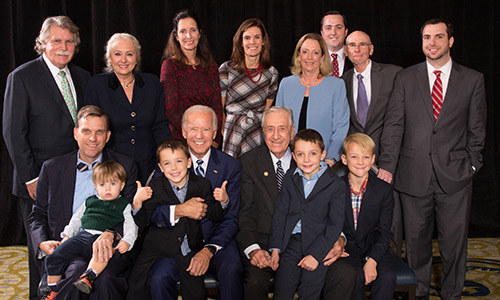 en was in the Senate. They became friends riding the Amtrak train to Washington,D.C. together, talking about not just policy, but family.

“Those hours were precious because we got to know each other,” Biden said. “Back in our day people (in Congress) knew each other and respected each other.”

“That invisible moral fabric that holds this country up is something you’ve always known,” he told Hughes.

In accepting the award, Hughes said it was Biden’s pledge to clean up the Brandywine Creek in Delaware that inspired him to run for office to clean up the ocean.  The two also worked together on many crime bills that addressed such issues as the sale of armor-piercing bullets and assault rifles.

“I view my 50 years of success as a labor of love,” Hughes said. “Thank you for the opportunity to serve my community and my country. I’ve loved every bit of it. A willingness to compromise made it possible to create good public policy.”

“He was so excited to be getting this,” Kathy Whelan said. “Stockton was very important to him. We enjoyed looking out the window and seeing the dorms go up (on the new campus) in Atlantic City.”

Sweeney continued the theme of civility, cited Whelan’s class, dignity and humor and Allen’s willingness to work together even though she is a Republican and he is a Democrat.

“It is bittersweet for me to lose Diane (who is retiring),” he said. “We are losing  someone we could work with, someone who cares about the people.”

Allen said government is broken right now, but can improve.

“It is important that you know there are still those who will work together,” she told the audience of more than 500 people.  “Civility is something we must work for.”

Honoree and Stockton alumna Brigid Callahan Harrison, a professor of political science and law at Montclair State University, and political commentator, continued the theme of civility.

“In an era when we are encouraged to hate, it is so very important to honor legislators who are willing to reach across the aisle,” she said.

U.S. Representative Bonnie Watson Coleman said she is thankful for the opportunity to let her voice be heard.

“I try to get to know my Republican colleagues,” she said. “Hyper-partisanship is destroying our country.  We are better than what we are experiencing now.”

The youngest honoree, 2017 Stockton graduate Maryam Sarhan, said she has been inspired by Stockton and her parents, who made the one-way trip from Egypt to America 16 years ago.  She said Stockton President Harvey Kesselman has been a mentor who sets an example by passionately advocating for causes he holds dear.

“I will always cherish my time at Stockton,” said Sarhan, who was Student Senate president and a student trustee. “I hope to continue with opportunities for public service.”

Kesselman also thanked Sharon Schulman, executive director of the William J. Hughes Center for Public Policy at Stockton, for her success and service to the center. She is retiring in January.

“Sharon has been a visionary for the center,” Kesselman said, citing not only the programs the center has sponsored, but the funds Schulman has raised to support those programs.

The Hughes Center Honors are awarded for professional excellence and a commitment to public service, civility and bipartisanship which reflect the life and career of Ambassador Hughes, who served as U.S. Ambassador to Panama and as a U.S. Congressman for 20 years.

For more information visit the Hughes Center website at: www.stockton.edu/hughescenter

Hughes, 84, a former prosecutor in Cape May County, represented South Jersey’s 2nd Congressional District in the House of Representatives from 1975 to 1995. His legislative accomplishments include passage of a ban on ocean dumping and major anti-crime laws. Hughes co-authored the act that preserved the New Jersey pinelands from development and separately secured Wild and Scenic River status for the Manumuskin and Menantico rivers. He worked to prevent the FAA Technical Center, which is now named after Hughes, from relocating to Oklahoma. The center stayed in Atlantic County, and developed into the nation’s premier aviation testing facility.

Upon retiring from Congress, then-President Bill Clinton appointed Hughes ambassador to Panama. Hughes served as ambassador for three years, during which he oversaw the process leading to the 1999 transfer of the Panama Canal back to Panamanian control.

Prior to her election to Congress in 2014, Watson Coleman served eight consecutive terms in the N.J. General Assembly. She has fought to help women, economically and socially disadvantaged populations, and other vulnerable groups. She was the first African-American woman to serve as Assembly Majority Leader and as Democratic State Committee chair. The former Stockton University trustee is the first African-American woman to represent New Jersey in Congress.

Allen was elected as a Republican to the state Assembly in November 1995, representing the Seventh District in Burlington County. She was elected to the state Senate two years later. Allen serves on Senate committees handling issues of health, senior citizens, veterans and education. Prior to government, Allen was known as a TV news anchor, reporter and producer in Philadelphia and New Jersey. Allen also ran VidComm, Inc., her own media production company. In 30-plus years in the media, Allen has won dozens of regional and national awards.

As mayor from 1990-2001, Whelan stabilized a scandal-plagued city government while overseeing economic growth related to casino gaming. He was elected as a Democrat from the 2nd District in Atlantic County to the state Assembly in 2005. Whelan was elected to the State Senate in 2007 and was re-elected twice. He championed issues related to gaming, tourism and the economy. Whelan attended Temple University, where the former lifeguard became a nationally-ranked swimmer. He taught in Atlantic City schools for more than 20 years.

Harrison has taught at Montclair State University since 1994. She is a frequent political commentator for ABC, NBC, CBS, FOX News, NJTV, CBS News radio, and for various NPR radio programs. She has authored several books and various peer-reviewed journal articles. Harrison received her B.A. from Stockton University in 1988, her M.A. from Rutgers University, and her Ph.D. from Temple University

Sarhan is a recent graduate of Stockton University, where she earned a B.A in Political Science with a Pre-law concentration. At Stockton, she served as Student Senate President and Student Trustee, and worked to advocate and empower her peers. She was also a student representative on the Hughes Center Steering Committee. Sarhan is currently based in Washington D.C. as a Congressional Fellow on Capitol Hill.

The William J. Hughes Center for Public Policy at Stockton University serves as a catalyst for research, analysis and innovative policy solutions on the economic, social and cultural issues facing New Jersey. The Center is named for Ambassador William J. Hughes, whose distinguished career includes service in the U.S. House of Representatives, Ambassador to Panama and as a Distinguished Visiting Professor at Stockton College. The Hughes Center can be found at www.facebook.com/Hughes.Center.Stockton.College and can be followed on Twitter: @hughescenter.