Galloway, NJ – Stockton faculty and students along with three Holocaust survivors witnessed the history of World War I and World War II in France and the Netherlands during the university’s spring break this month. Undergraduate and graduate students joined the survivors as they reunited with family members of those who rescued them, visited their hiding locations and learned more of the personal details of each survivor’s story.

Daniel Kochavi, one of the survivors, was a young boy living in Paris during the Nazi occupation of France. His mother put him into hiding in a Catholic boarding school for girls while she found a different place to hide herself. The young boy peered from the balcony of his fourth-floor apartment where he would watch over the happenings of the city during World War II.

During the study tour, Kochavi and the group of 42 Stockton faculty and students, including those who have been writing Kochavi’s family biography, returned to his former apartment building in Paris, now an office building owned by the Association of Christians Against Torture (ACAT), a non-profit foundation that aids refugees.

“As humans, when we witness tragedy, we strive for closure, but it doesn’t always happen,” said Gail Rosenthal, director of Stockton’s Sara & Sam Schoffer Holocaust Resource Center (HRC) and one of the study tour leaders. “Daniel wanted to return to his apartment, and on our way, we explained to him that the building may not even be there.”

As the group gathered in front of the apartment building, a man emerged from the front door, a bit startled to see the large group. He asked why they were there.

Kochavi, who still speaks French, and Michael Hayse, associate professor of History and lead author of Kochavi’s collective biography, explained the survivor’s story. The local man, Jean Étienne Linares of the ACAT organization, then invited Kochavi, Hayse and the group of nine students working on the memoir on a personal tour of the building. 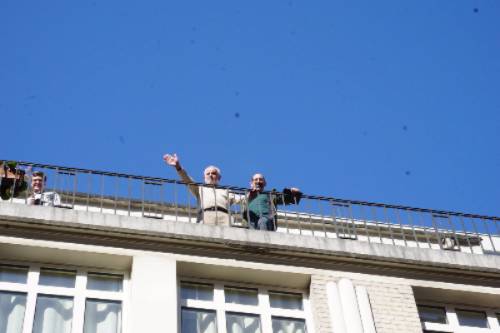 Holocaust survivor Daniel Kochavi (left) waves from the balcony of the building where he lived during and after World War II. This spring was his first time back to the building, which is now the home of a non-profit foundation that aids refugees. His son, Jonathan, is pictured at right.

The remaining Stockton students stood below and watched as Holocaust survivor Daniel Kochavi and his son, Jonathan, waved from the fourth-story balcony above.

Sarah Albertson, a recent graduate of Stockton’s Master of Arts in Holocaust & Genocide program who works in the HRC, transcribed audio testimony about Kochavi’s mother for the memoir, which is expected to be complete later this year. She stepped out on to the balcony with the other memoir project workers and shared the special moment with the survivor.

“It was as if we had stepped back in time,” she said. “It was the first time he had been in the building since he left as a young boy. It was very moving to stand there with him.”

“The students have written chapters for the Kochavi family biography, so that was really special to share with them,” Hayse said.

“When [Kochavi] came back on the bus, he was a different person. He had closure,” said Rosenthal.

The survivors are what make the study tour experience spectacular for both the students and the tour leaders, explained Hayse, whose own study abroad experience inspired his current involvement with Stockton’s study tour program.

“Travel is important and these tours are very meaningful; it is something I want to share with my students,” he said.

Rosenthal and Hayse have been leading tours together since 1999, and this year was the first time they took students to France. In recent years, the tours have occurred every other year, and they have always been joined by survivors.

The itinerary for each tour varies, and in many ways is determined by the survivors going on the trip.

Holocaust survivors Maud Dahme and Leo Ullman also accompanied this year’s study tour, and shared with students their invaluable, firsthand stories of hiding in the Netherlands during World War II.

Dahme met the current owners of her grandparents’ house in Amersfoort, where she lived during the war. She also found both her maternal and paternal family names at the Schouwburg Theatre, now a memorial, from where her family was deported.

Ullman reunited with the granddaughter and great grandchildren of the man responsible for forging documents that helped save his family members. Ullman and his parents were in hiding for 796 days. Ullman was hidden with locals, apart from his family, in Amsterdam because he was a young child and his parents were afraid that a child’s laughter or crying would attract attention.

Students, tour leaders and survivors visited sites in both the Netherlands and France including the Anne Frank House in Amsterdam; the hidden village in Vierhouten, Gelderland; the Jewish cemetery in Elburg; the Utah and Omaha beaches of D-Day in Normandy; and the Shoah Memorial in Paris.

The tour walked the Second Line Trench at the Battle of the Somme in Beaumont-Hamel; stood inside a German bunker at the Caen Normandy Memorial Museum; and placed flags in front of graves at the Normandy American Cemetery and Memorial.

“The study tour begins as a course taken during the semester, which include textbook readings and history lessons, but the trip itself brings the history of the Holocaust alive,” said Rosenthal. “Every trip, something happens that we will remember for a very long time.”

“We always want to take Holocaust survivors, but it’s getting harder and harder as they’re getting older. Dan, Maud and Leo were just children during the war,” Hayse said. “This might be the last trip with survivors, we just don’t know.”

Additional photos and captions can be found on the study tour Facebook page and blog.
Photos courtesy of Stockton University’s Holocaust Study Tour 2017.